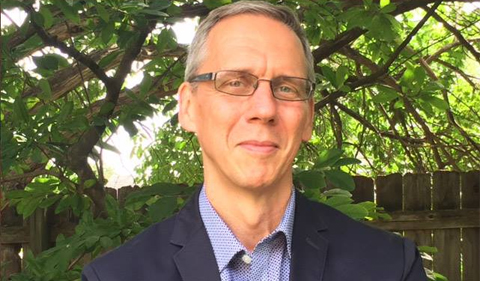 Ohio University professor of Classics and World Religion Loren Lybarger’s newly released book, “Palestinian Chicago: Identity in Exile,” takes a deep look into Chicago as home to one of the largest, most politically active Palestinian immigrant communities in the United States.

“I’m really hoping this book helps people understand the importance of humility and how little we may know about the complex lives of the people around us,” Lybarger said. “Because of persisting stereotypes, we often make mistakes in understanding when it comes to Islam and Muslim immigrants, and Palestinians, especially, in this country.”

Drawing from Lybarger’s many years of living in Chicago, as well as from his extensive fieldwork and interview data, the book charts shifts in Palestinian immigrant identities from older secular nationalist orientations to newer emphases on religious piety. His rich ethnographic examples trace these changes across religious, political, class, gender, and generational lines, while offering critical insight into current debates about secularism, religion, immigration, and national belonging.

“This second book of mine, on Palestinians in Chicago, grew out of my personal experiences when I moved to the city for graduate study in 1993 and then quickly got connected to the Palestinian immigrant community there,” Lybarger added. “During that time, I saw this profound shift in the community where Palestinians moved to the suburbs in large numbers and drifted away from the secular-nationalist community centers in their older immigrant enclaves. In the suburbs, they began to embrace a new Islamic orthopraxy as the framework of individual and collective identity.”

Lybarger specifically talks about this shift in his book, including examples such as how one time at a fundraiser for a new, secular social service organization, the Arab American Action Network, Lybarger remembers college-aged activists delaying the keynote speaker, the well-known Palestinian American intellectual, Edward Said, by making a public display of performing the maghrib prayer together. He recounts this incident in “Palestinian Chicago,” describing it as a moment that caused him to wonder why this religious shift had happened, what it meant for Palestinian secularism, and what its long-term impact would be.

Prior to writing this book, Lybarger published another book, “Identity and Religion in Palestine,” that provides insights into the complex social dynamics through which Islamism has reshaped what it means to see oneself as Palestinian. He has also spent seven years living in the Occupied West Bank and Gaza Strip, working with the Mennonite Central Committee and AMIDEAST to provide educational and professional development opportunities for Palestinian school children and adult professionals.

“Palestinian Chicago” is the first book to appear in the University of California’s new series New Directions in Palestinian Studies. The New Directions series “publishes books that put Palestinians at the center of research projects and that make an innovative contribution to decolonizing and globalizing knowledge production about the Palestinians in and beyond Palestine,” according to the New Directions website, which also notes that books are made available as affordable paperbacks or for free on UC Press’s open access platform, Luminos.

“The College of Arts and Sciences Humanities Research Fund helped support this open-access publishing option for my book, as well as its indexing,” notes Lybarger. “I am grateful for this support and think it’s incredibly important for scholars and their universities to help make research like this as widely accessible as possible.”