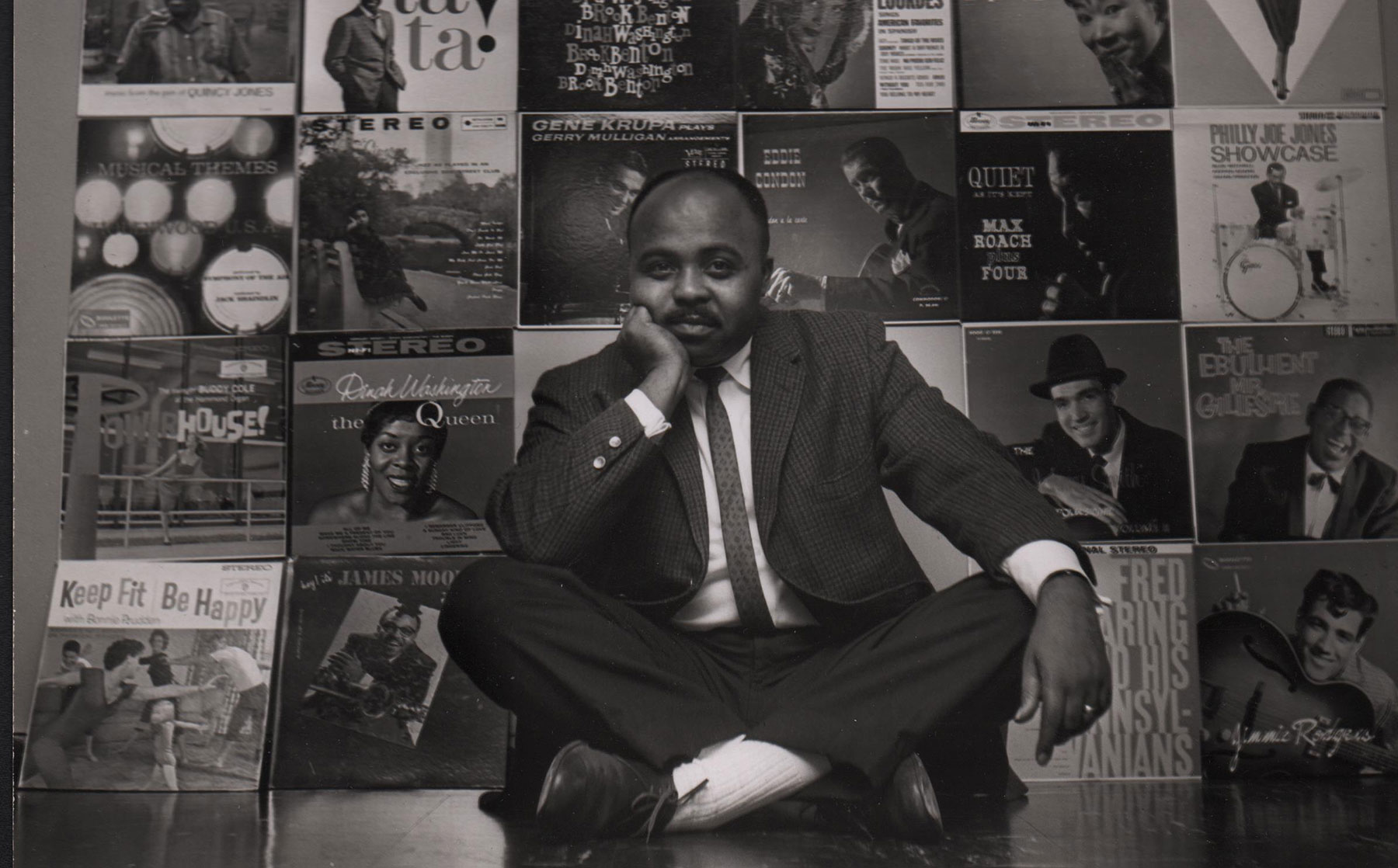 The photography of the late Chuck Stewart, BFA ’49, has graced the covers of more than 2,000 albums and appeared in numerous documentaries and museums around the world—and now, for the first time, is on display at Cleveland’s Rock and Roll Hall of Fame.

In response to the social justice movement sweeping the nation and the Black Lives Matter protests, the Rock and Roll Hall of Fame has debuted “It’s Been Said All Along: Voices of Rage, Hope & Empowerment.” The exhibit showcases artists and moments in which music has been used as a medium of change, drawing attention to the power artists and their music have to give voice to the feelings and experiences of those who are oppressed and to provide encouragement and empowerment.

The exhibit, which opened in July and will remain on display for a year, includes artifacts from some of the Hall of Fame’s inductees as well as images captured by influential Black photographers, including Ohio University College of Fine Arts alumnus Chuck Stewart. “It’s Been Said All Along” features photographs Chuck Stewart took of James Brown, Ray Charles, Nat King Cole and Gil Scott-Heron over the course of his 70-year career.

The Rock and Roll Hall of Fame’s “It’s Been Said All Along: Voices of Rage, Hope & Empowerment” social justice exhibit opened in July and features the photography of Ohio University College of Fine Arts alumnus Chuck Stewart.

The Rock and Roll Hall of Fame’s “It’s Been Said All Along: Voices of Rage, Hope & Empowerment” exhibit is open for both in-person and virtual viewing. 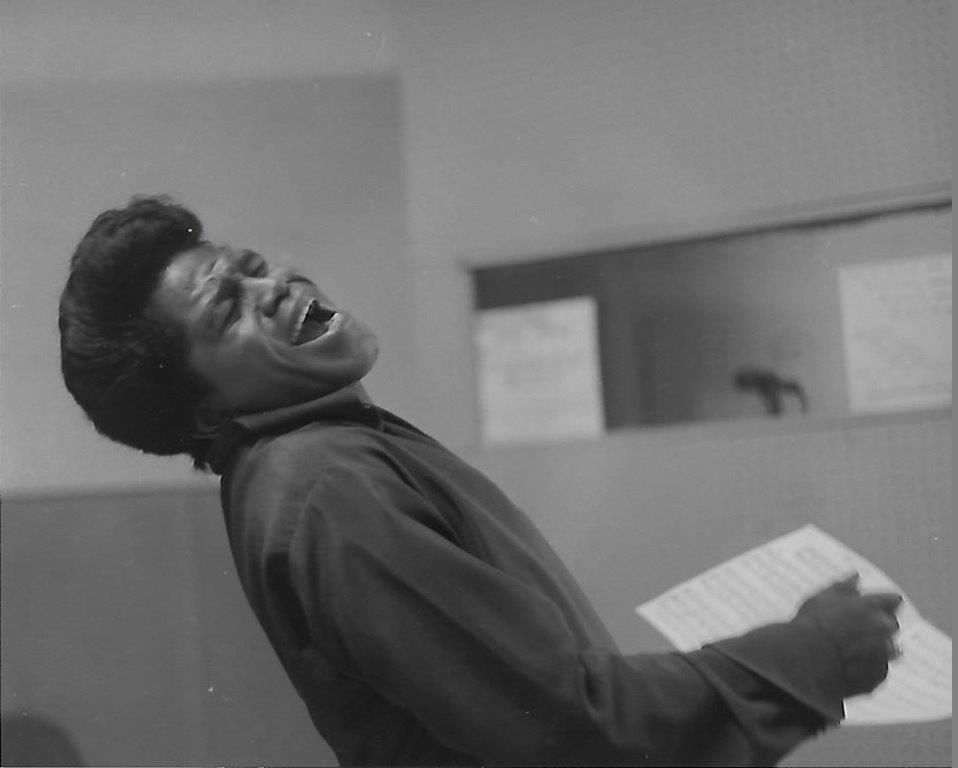 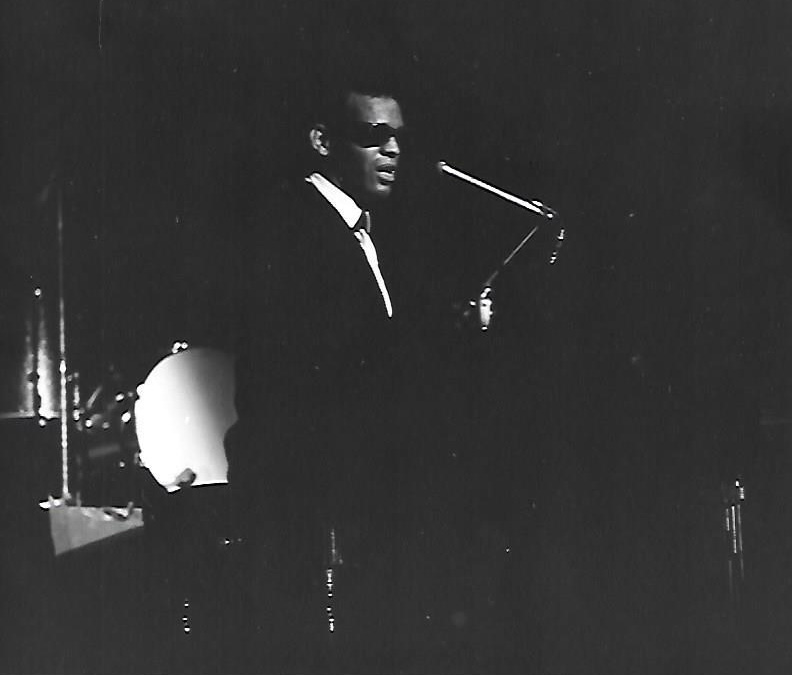 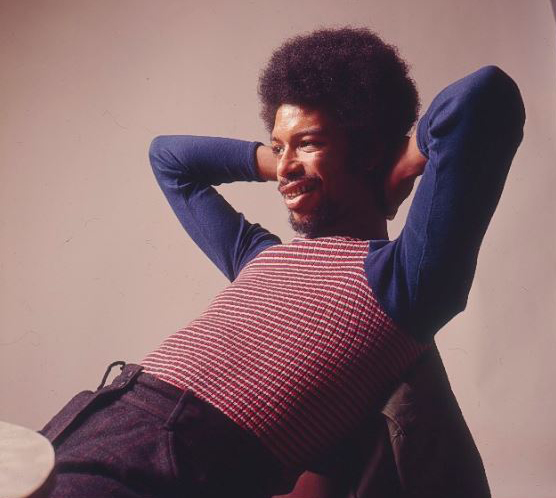 This photo of Gil Scott-Heron was taken by Chuck Stewart, BFA ’49, and is featured in the Rock and Roll Hall of Fame’s “It’s Been Said All Along: Voices of Rage, Hope & Empowerment.” © Chuck Stewart Photography, LLC/Fireball Entertainment Group 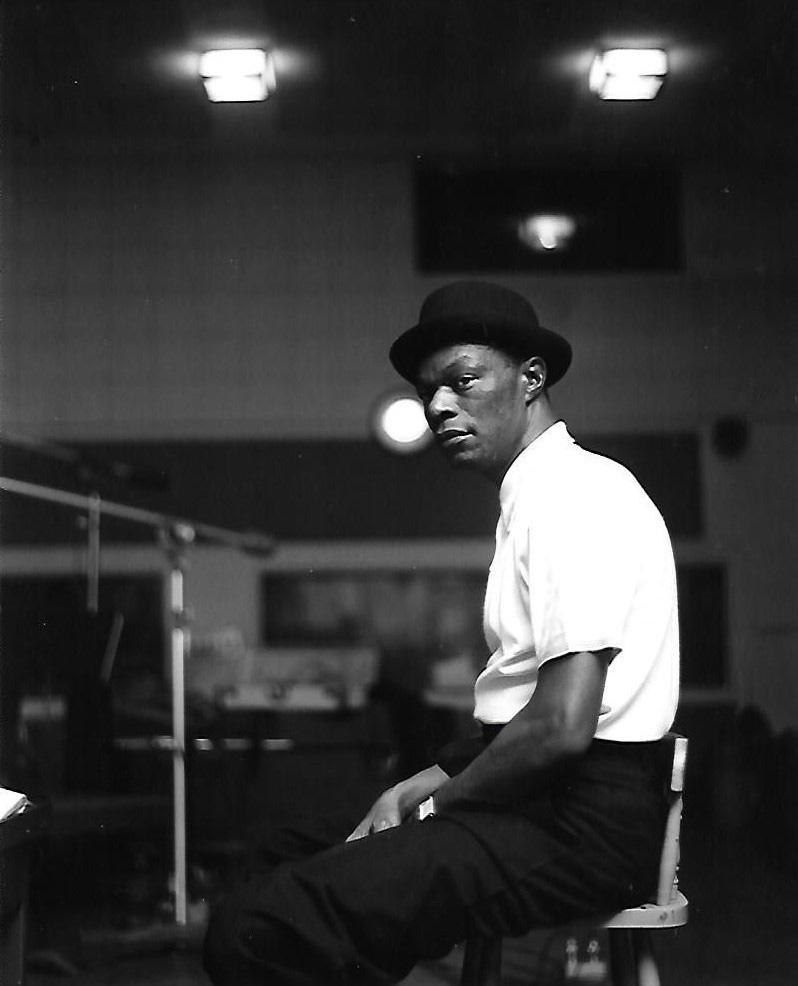 This photo of Nat King Cole was taken in 1958 by Chuck Stewart, BFA ’49, and is featured in the Rock and Roll Hall of Fame’s “It’s Been Said All Along: Voices of Rage, Hope & Empowerment.” © Chuck Stewart Photography, LLC/Fireball Entertainment Group

“Knowing Chuck, he never would have thought that his pictures would have a place in an exhibit such as this for a time such as this because he didn’t document anything of the civil rights movement back in the ’50s and ’60s,” Kim Stewart said of her father-in-law who passed away in 2017. “He took these phenomenal, iconic images that are now fitting in different platforms outside of just music. Now, it’s also the message.”

The exhibit shines a spotlight on Black artists who have triumphed over obstacles and, in the process, contributed to a more just and equal society. Chuck Stewart can easily be counted among those artists.

When he enrolled at Ohio University in 1945, Chuck Stewart was one of only a handful of Black students on campus, taking classes in what was the only collegiate level degree-granting photography program in the nation that would accept Black students. He used his photography skills to document life at the University, serving three years on the staff of the Athena Yearbook as a photographer and darkroom manager. 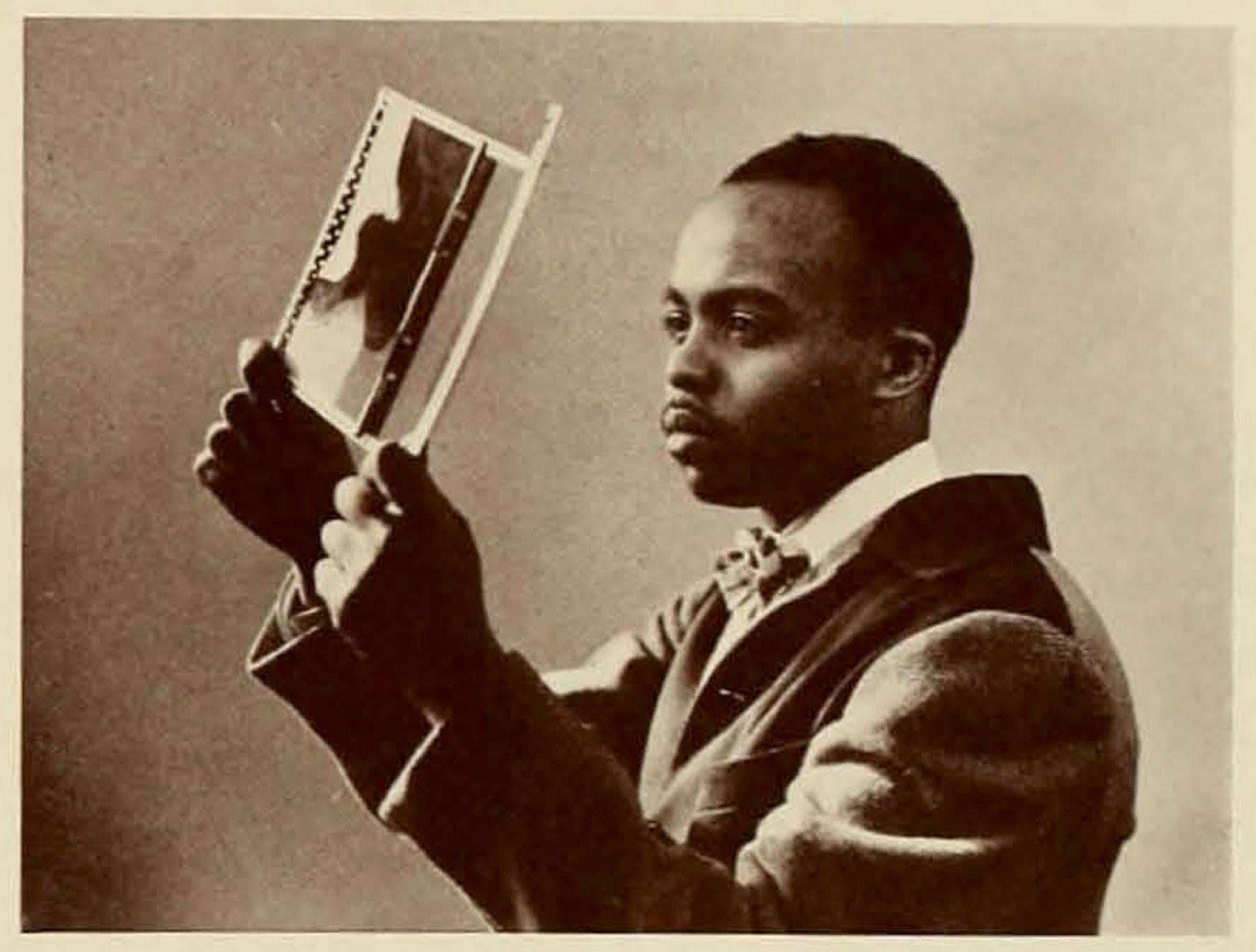 This picture of Chuck Stewart, BFA ’49, was featured in the 1947 Athena Yearbook, where he served as the darkroom manager. Photo courtesy of the Mahn Center for Archives and Special Collections

While at Ohio University, Chuck Stewart developed what would become a lifelong friendship with fellow Bobcat Herman Leonard, BFA ’47, HON ’09. Over the course of the next 60 years, the two contributed in significant ways to each other’s success as photographers whose work documenting the world’s jazz icons made them legends in their field. Both have been honored with having their individual work accepted in the photography collection at the Smithsonian Institution.

“They were best friends,” Kim Stewart said of her father-in-law and Leonard. “Herman was Chuck’s best man. Herman is the godfather of Chuck’s first daughter. They became literally the best of friends and partners and colleagues—and considered themselves brothers.”

While Chuck Stewart’s professional legacy largely revolves around jazz—the “bread and butter” of his career as Kim Stewart described it—the approximately 800,000 negatives in his collection include everything from sports and Hollywood celebrities to musicians from other genres, including the Beatles, Led Zeppelin and Bob Dylan.

Regardless of the subject, he always strived to have his work stand out from that of other photographers.

“... If you say Count Basie, there must be a thousand photographers that have photographed him,” Chuck Stewart said in 2016 interview with New Jersey’s WBGO. “Well, I wanted my pictures to say, ‘This is a picture Chuck Stewart took of Count Basie.’” 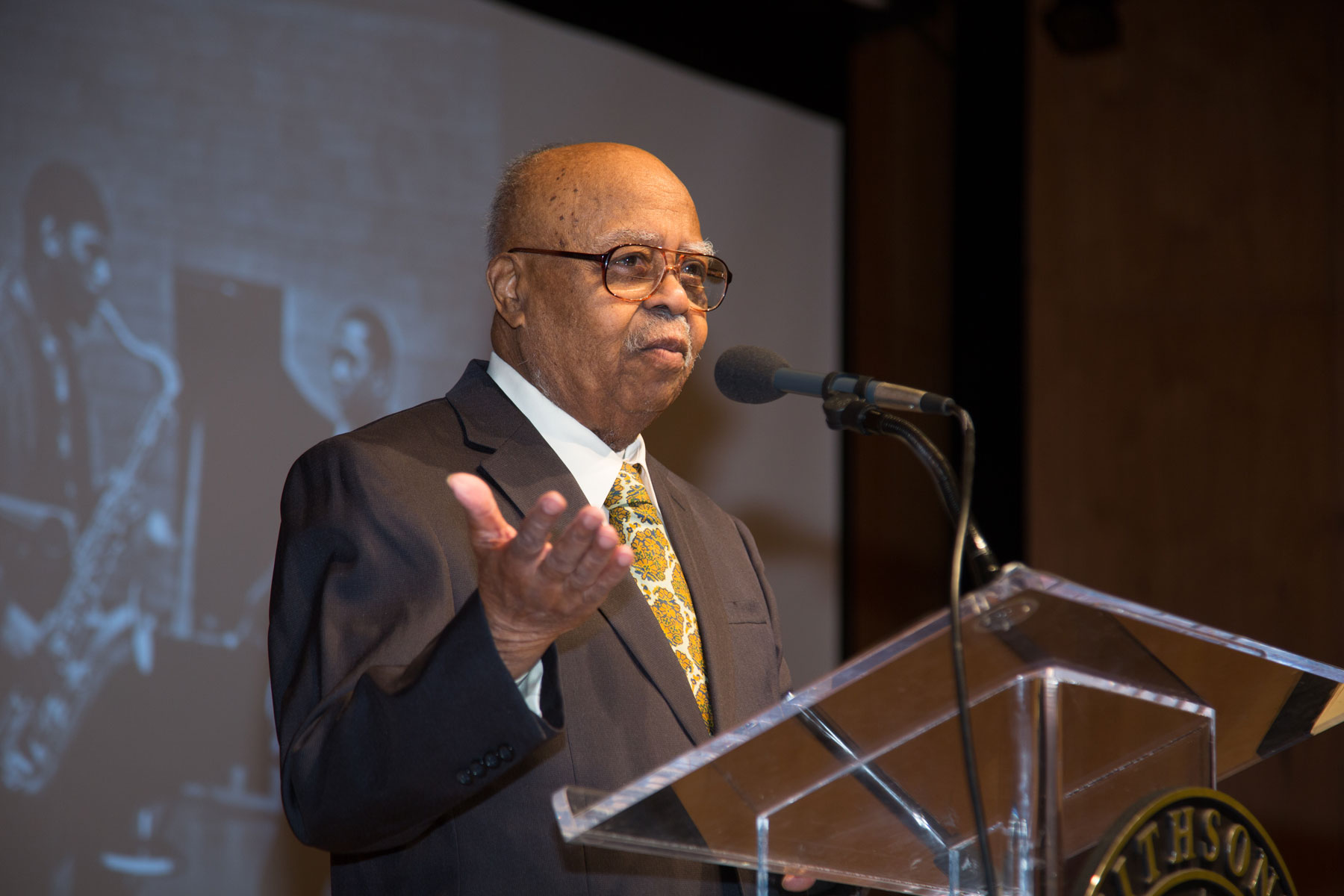 Chuck Stewart, BFA ’49, speaks at the Smithsonian’s Warner Theater at a 2014 event celebrating the 50th anniversary of John Coltrane’s recording of “A Love Supreme,” which Stewart captured in photos. Photo by Jeff Malet

Chuck Stewart’s work has been featured in countless books and magazines and exhibited at notable venues that include the Grammy Museum, the National Endowment for the Arts and the Smithsonian, where in 2014 he was honored 50 years after shooting photos of John Coltrane’s recording of “A Love Supreme.” His work can also be seen in numerous documentaries, including “Chasing Trane: The John Coltrane Documentary”; “Quincy,” highlighting the career of Quincy Jones; and “What Happened, Miss Simone?” about Nina Simone. At the moment, Kim Stewart is collecting some of Chuck Stewart’s photos for inclusion in an upcoming documentary about Gil Scott-Heron.

“He documented history, culture and so much with his pictures,” Kim Stewart said. “For the Rock and Roll Hall of Fame, which I look at as one of the top musical institutions, to say we want to use Chuck’s pictures, I think that says a lot. They could have gotten any photographer and any African American photographer, and I just feel honored that they chose Chuck Stewart’s because of what those images reflect—of the subjects and of Chuck’s work. … It’s beautiful because it’s with a purpose.”

The Rock and Roll Hall of Fame’s “It’s Been Said All Along: Voices of Rage, Hope & Empowerment” exhibit is open for both in-person and virtual viewing. For more information and to access the virtual version of the exhibit, click here.

To read more about the life and legacy of Chuck Stewart, click here.