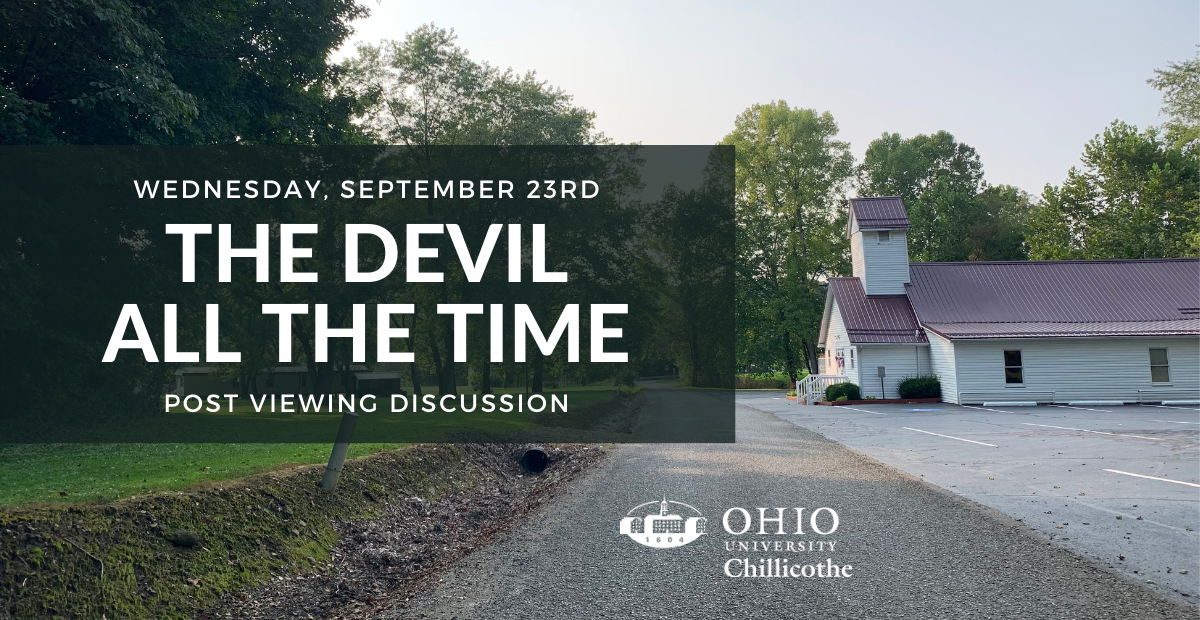 Ohio University Chillicothe will host a Zoom post-viewing discussion of one of the current top Netflix films, “The Devil All the Time,” based off of OHIO Chillicothe alumnus Donald Ray Pollock’s popular book of the same name on Wednesday, Sept. 23, beginning at 6 p.m.

The discussion, led by Chillicothe Dean Dywayne Nicely and Associate Professor of English Tony Vinci, will give deeper insight into the film and the inspiration behind this literary masterpiece.

“We need to talk about stories—it’s programmed into us and in our DNA,” Vinci said. “We don’t know how to process what we’ve just witnessed or experienced until we try to verbalize our thoughts or share our feelings. So, I love talking through films with people, and since ‘The Devil All the Time’ has so many connections to Ohio University Chillicothe, I think this discussion will play with that.”

“The Devil All the Time” is a midwestern gothic saga that explores the lives of characters living near and in the town of Knockemstiff, Ohio, between World War II and the Vietnam War. It tells the story of the various weights each character carries from the secrets of their past and how their lives converge in unexpected ways.

“The book is outstanding. Don is such a vivid writer and it’s easy as a reader to be immersed into the story because of that,” Nicely said. “I also thoroughly enjoyed the movie and thought it was respectful to the book and want people to have fun and participate in this conversation between a scholar and the audience who has watched this riveting film.”

Nicely and Vinci plan to examine some of the more intense and surprising moments in the film, as well as the film itself and how it works as a gothic tale. They will also look at how the film was created to express certain ideas and produce certain responses from audiences.

Vinci will share his expertise in film and popular literature and culture by providing an overview of what it means for a piece of literature to be “gothic” and how a book is adapted into a film.

“We tend to get so angry when a film is different than the book, and I want to share some ideas about how we might think of that differently through this post-show discussion,” Vinci added.

Pollock is a longtime resident of Chillicothe, graduating from OHIO Chillicothe in 1994. He was a non-traditional student who took courses to help him earn his bachelor’s degree in English. He is best known for his fictional characters from the southern Ohio, Appalachian region.

“Don’s life is certainly relevant to students on our campus because we have a significant proportion of our students who are non-traditional students, and Don is living proof that you can become very successful no matter what stage of life that you find yourself in,” Nicely said.

Those interested in participating in the discussion can join using the following Zoom link: https://ou-rhe.zoom.us/j/98313942563.