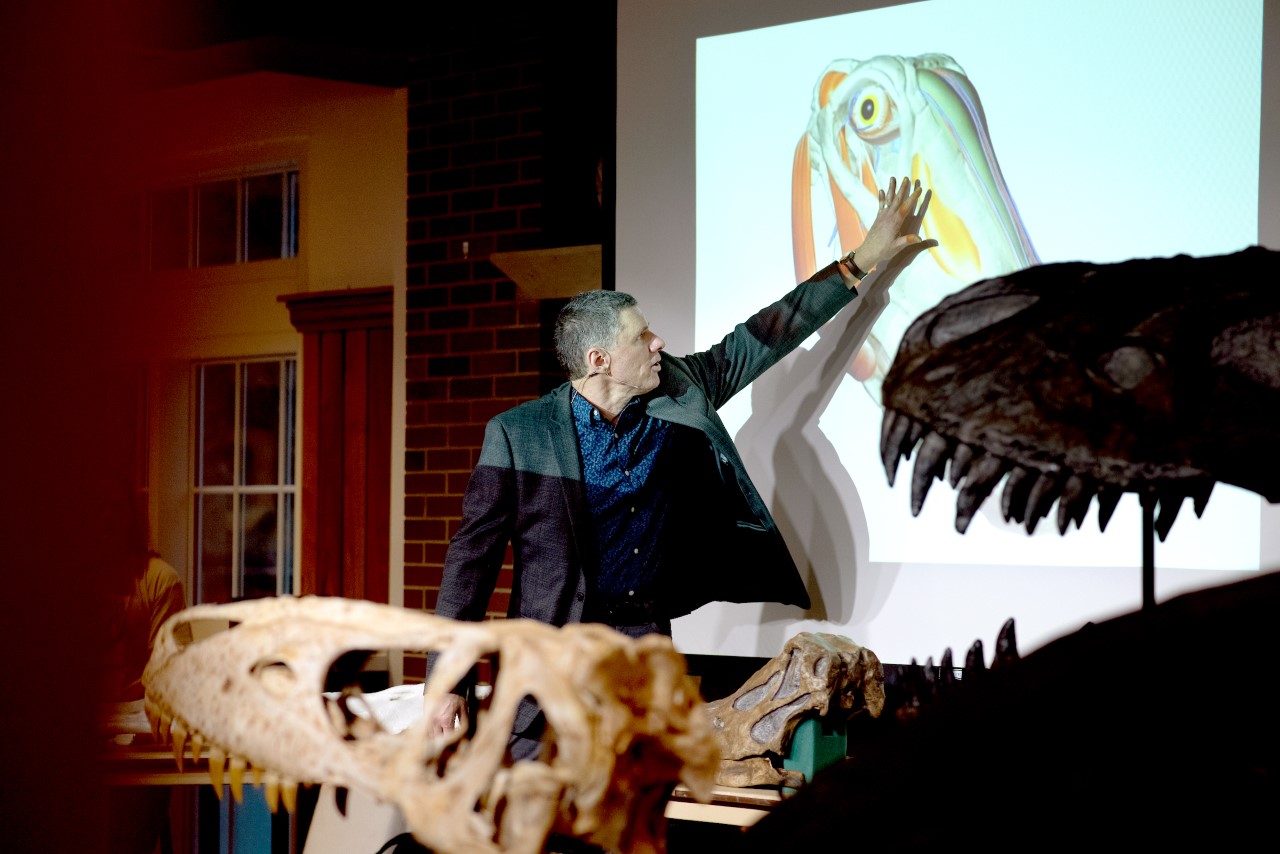 The 2020 issue will cover the latest cutting-edge achievements in dinosaur paleontology, drawing on findings from researchers across the globe. The online version of the story debuted today, Sept. 15. 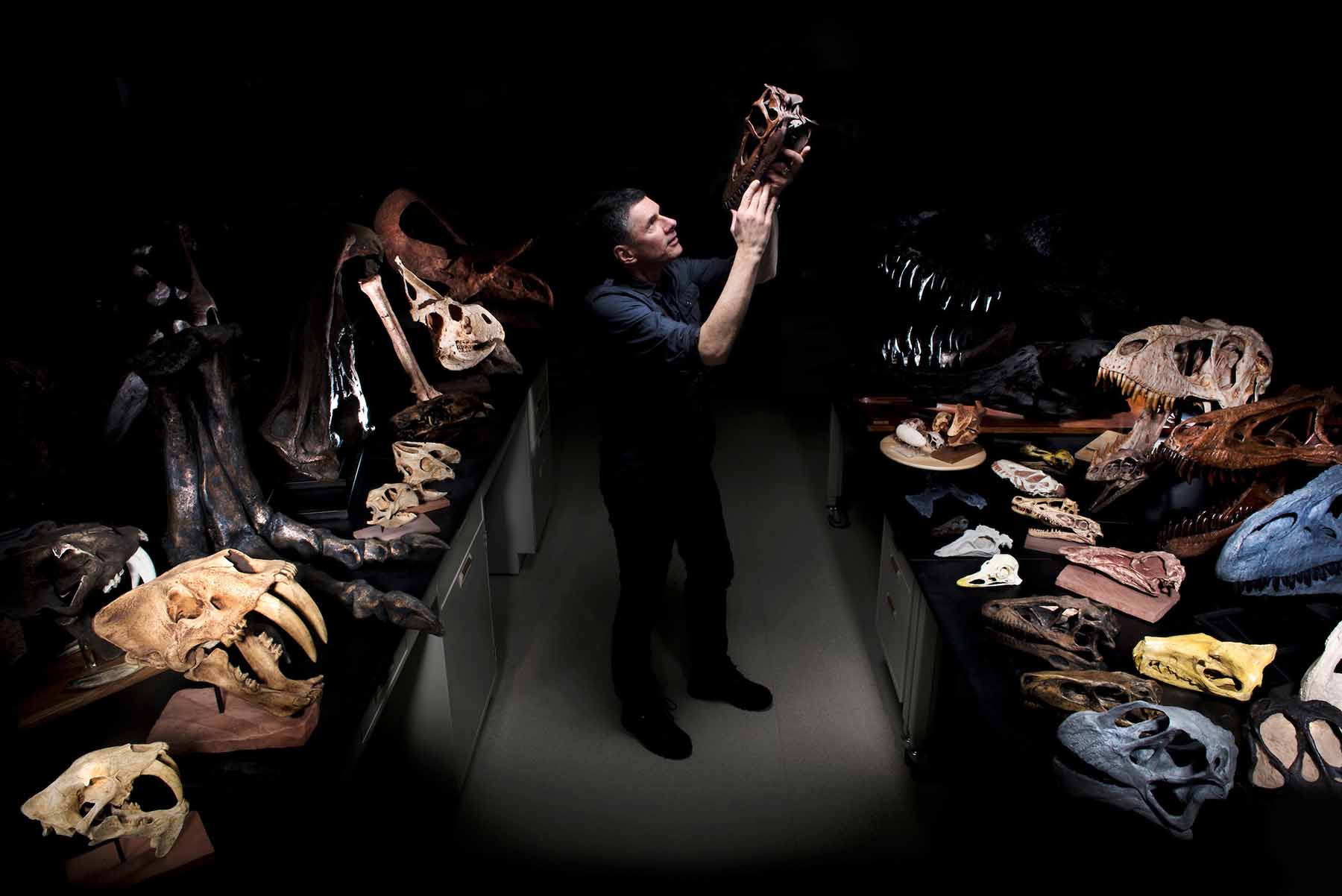 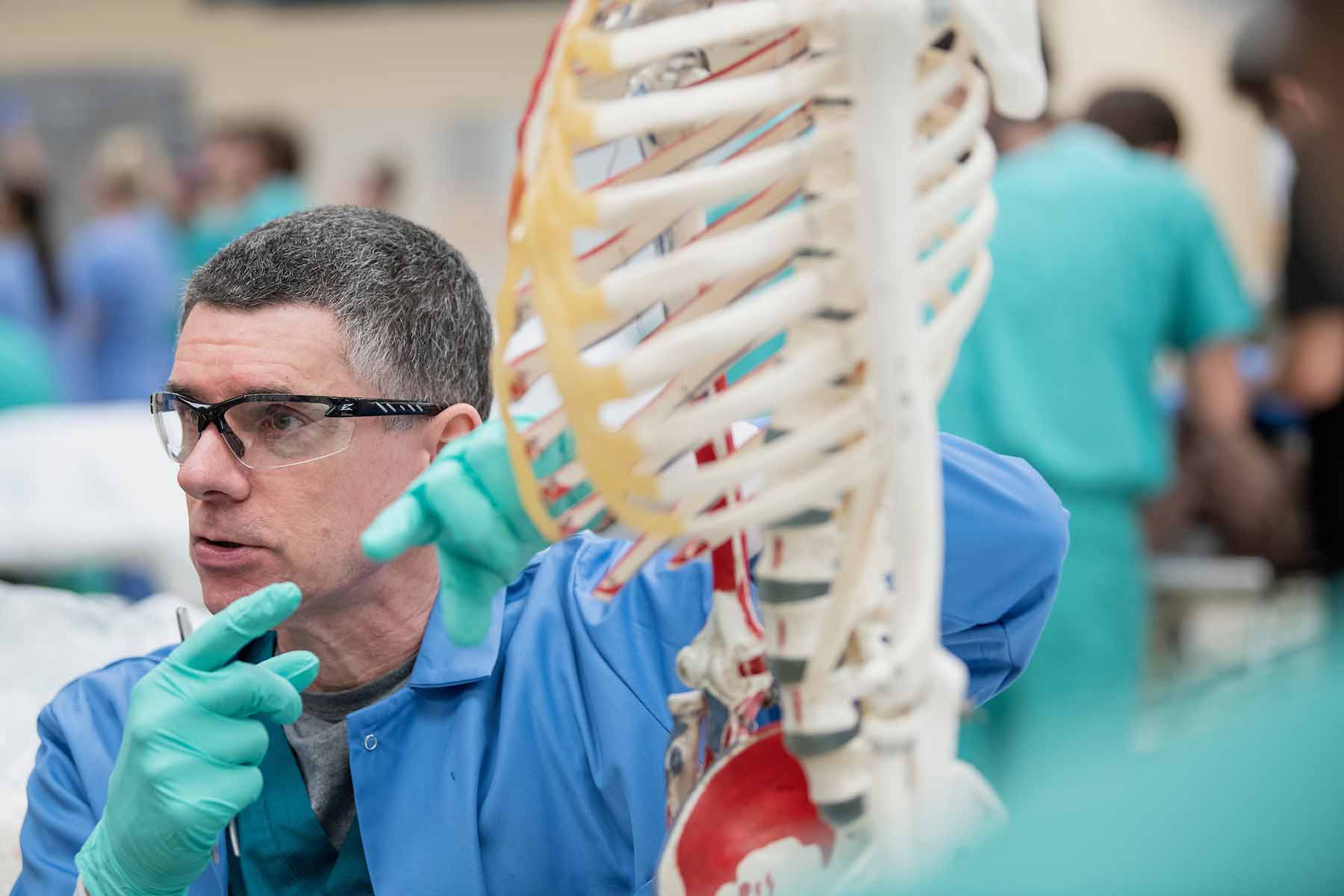 Witmer, professor of anatomy and the Chang Ying-Chien professor of paleontology, was previously featured in a similar 2003 issue of National Geographic Magazine. In March of this year, National Geographic sent renowned Italian photographer Paolo Verzone to Ohio University to document and photograph WitmerLab’s work. Witmer also outlined his work in a recent Science Cafe.

According to Witmer, his lab “has one foot in the present and the other foot in the past,” using the structure of modern-day animals to better understand extinct animals like dinosaurs. 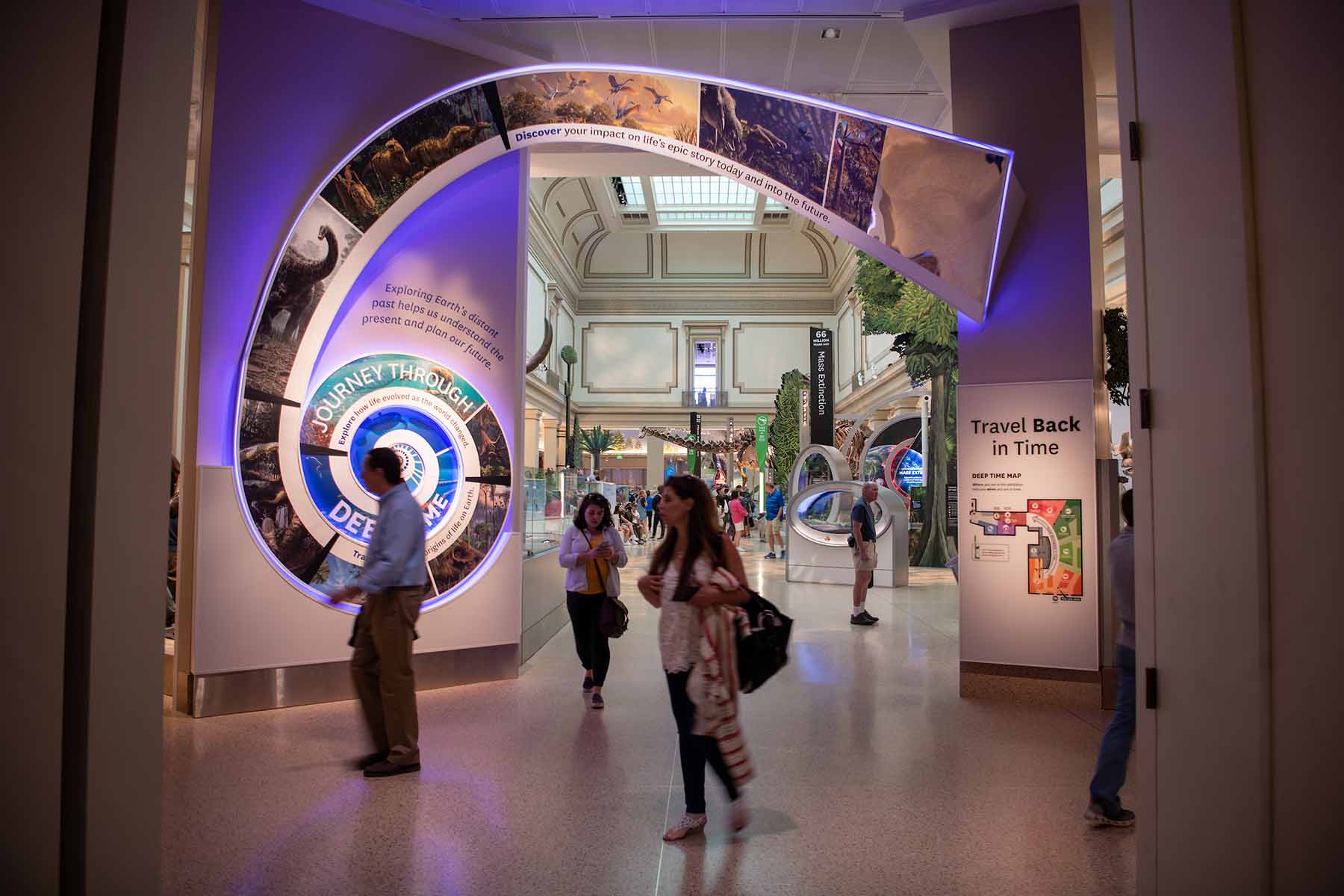 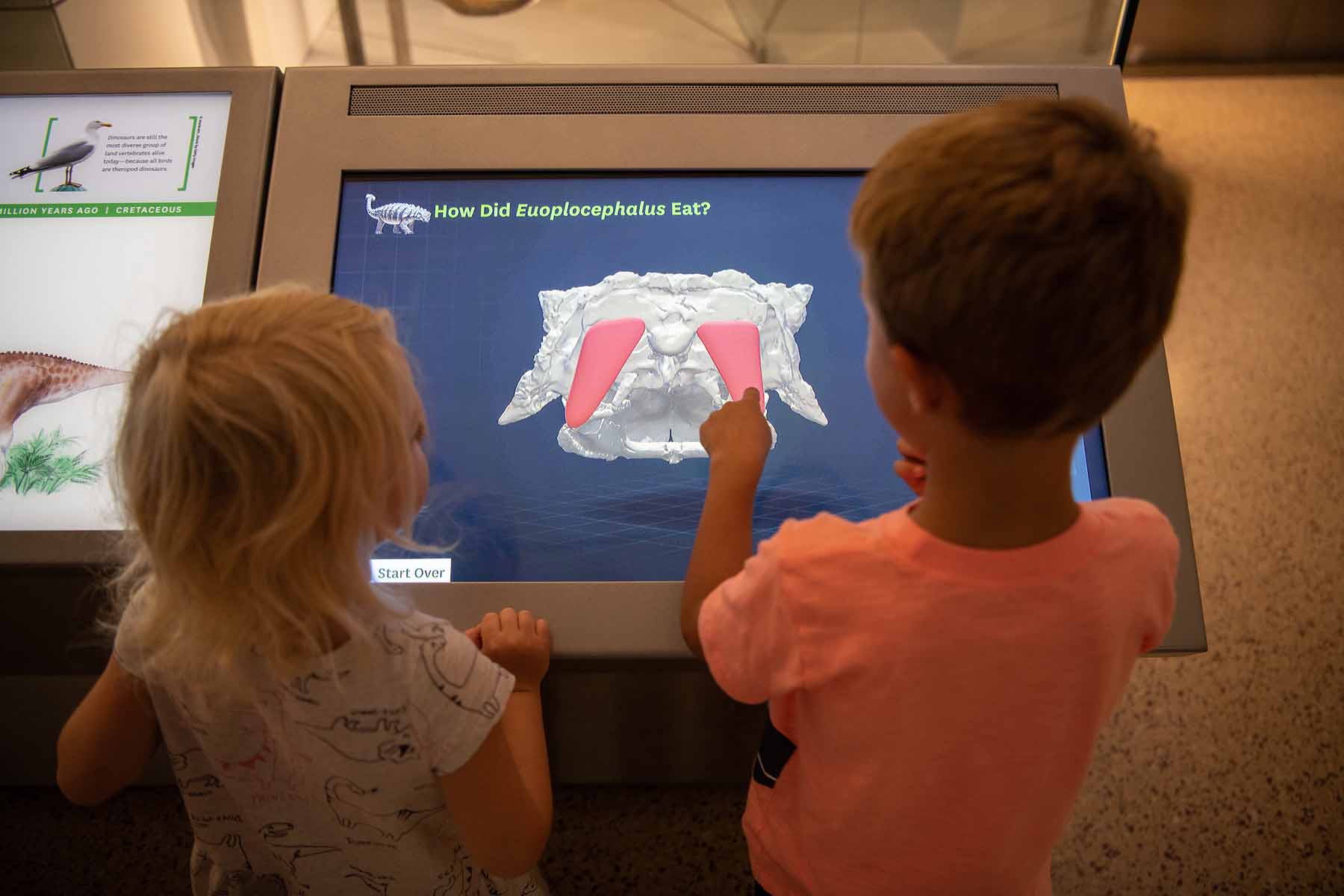 Witmer’s research includes using high-tech computed tomography (CT) scans, 3D computer visualization software, and unique techniques that were developed in his lab to evaluate a fossil and fill in missing pieces, like soft tissues, blood vessels, muscles, brains, and more, to learn how that dinosaur would have functioned in life. His research lab was among the first to use CT scans in paleontological research.

Few technologies have so profoundly altered our view of dinosaurs as medical CT scanning,
which is now a standard in the paleo tool kit.

‘We've been able to pull all of these extinct bones into a computer, where we can do things with them,’ says Ohio University paleontologist Lawrence Witmer. ‘We can reconstruct missing bits … and do crash tests and run simulations and better understand how these animals actually functioned.’ — National Geographic

“Having such an iconic magazine as National Geographic visit is always an honor, and it’s a testament to the outstanding work done by Ohio University grad students and undergrads in our lab over the years,” Witmer said.

During the visit, Witmer and his research team gave the National Geographic crew a behind-the-scenes look at his lab, including specimens, research techniques and more. The groups also traveled to OhioHealth O’Bleness Hospital in Athens, where Witmer and his team CT scanned a frozen 8.5-foot crocodile for their research. 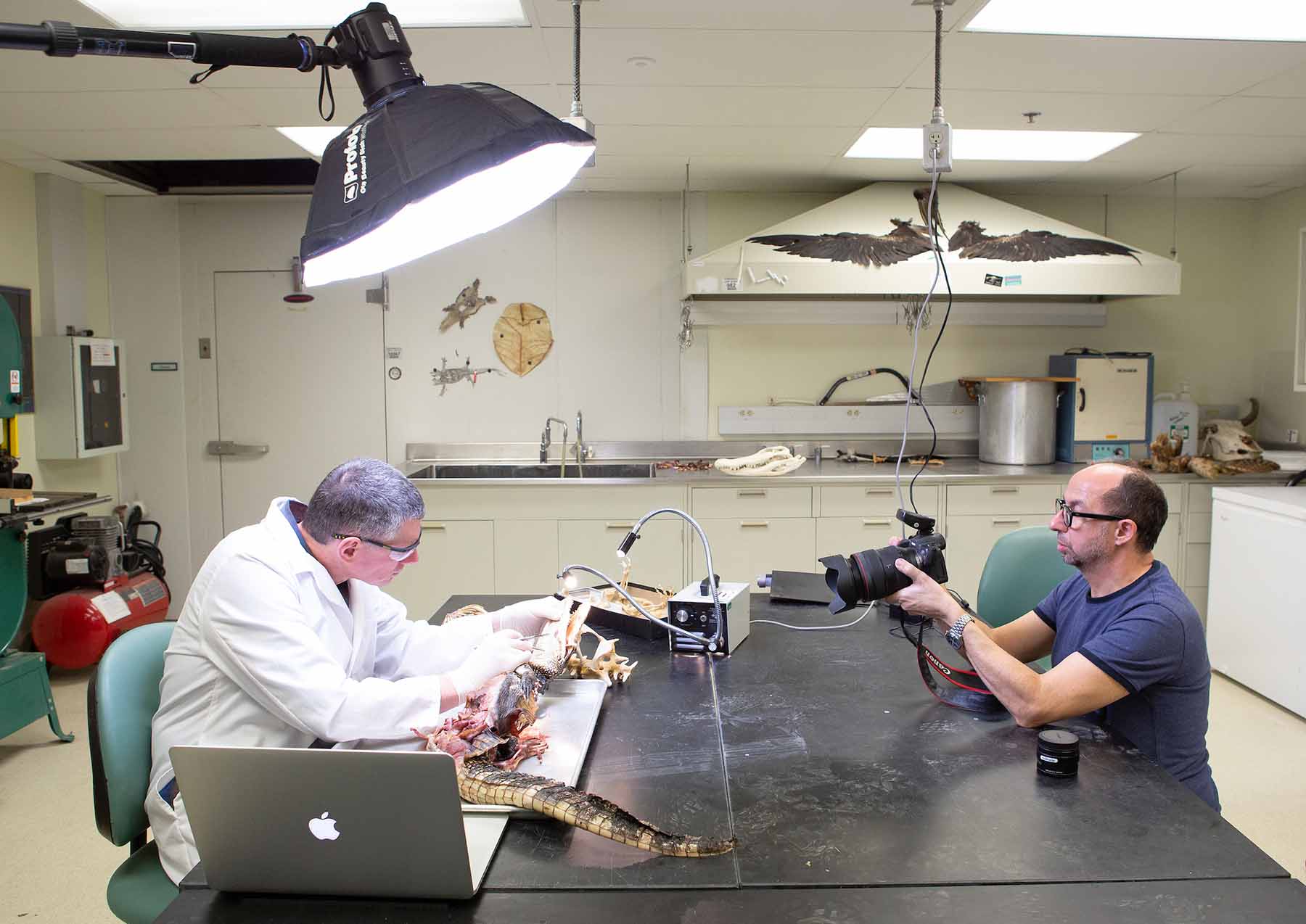 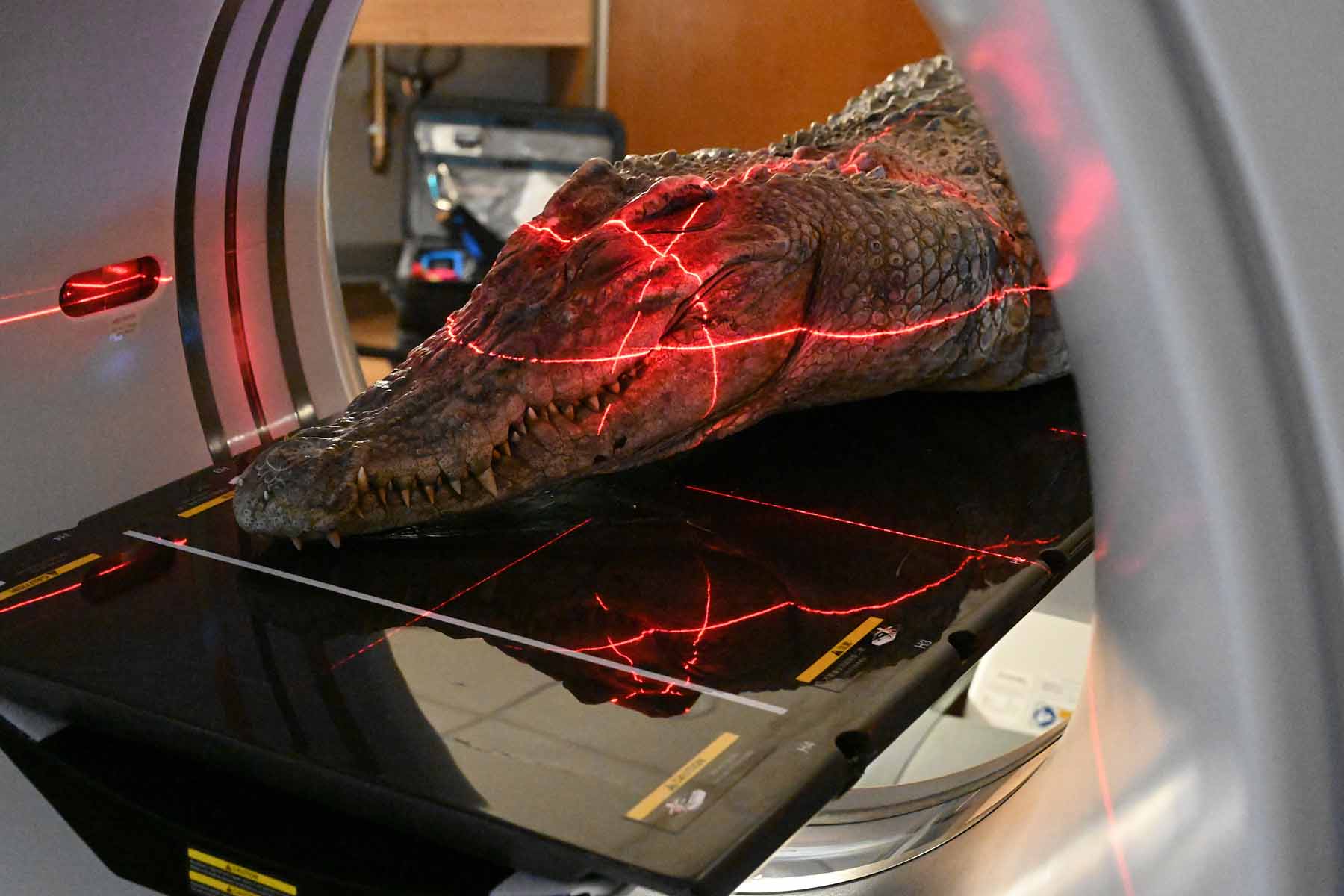 The team scanned a crocodile in the CT machine while the National Geographic crew visited. Photo Credit: Larry Witmer 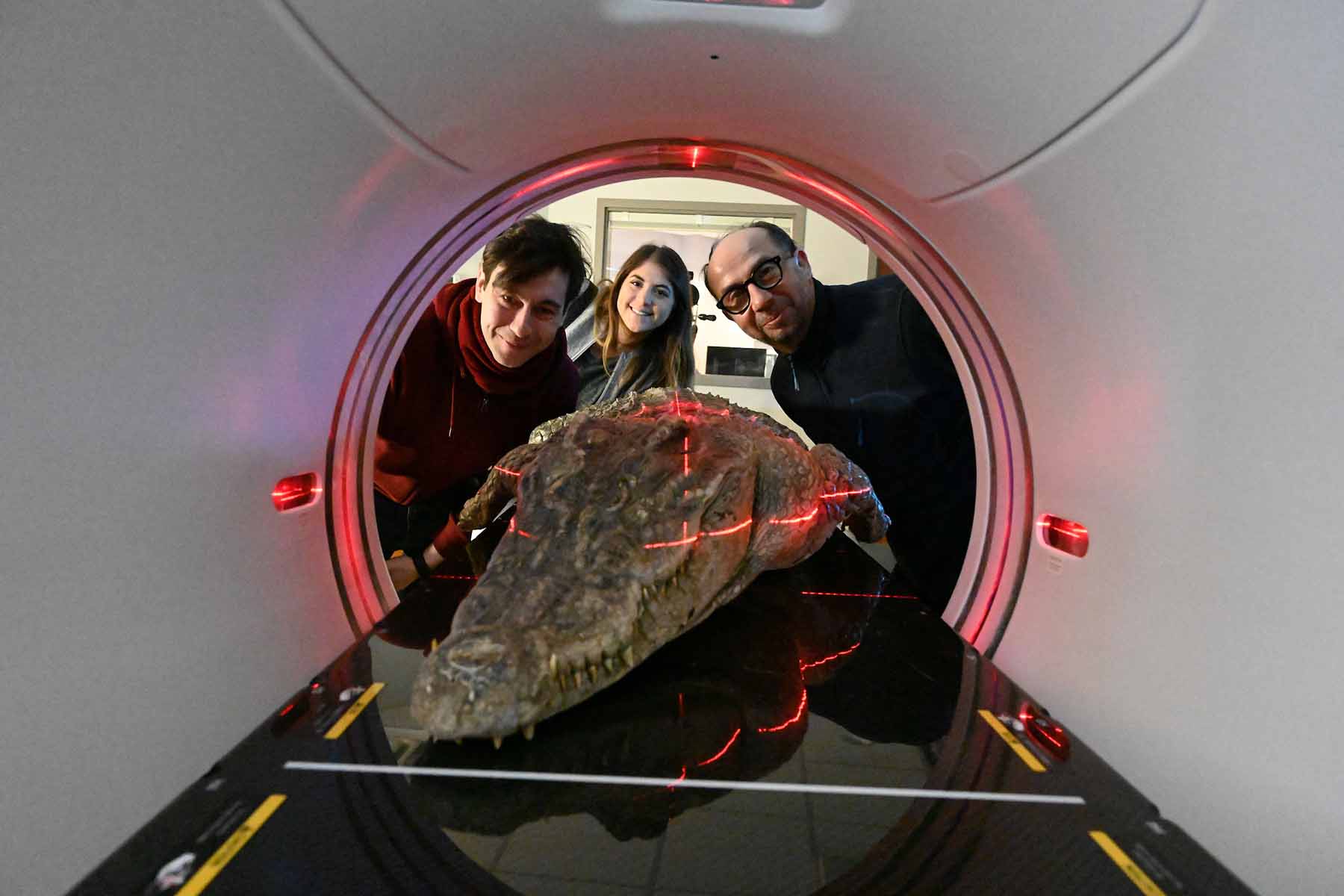 From left to right, photographer assistant Massimo Nicolaci, OHIO student Alie Skowronski, and photographer Paolo Verzone pose at the end of the CT scan for a photo, along with the crocodile. Photo Credit: Larry Witmer 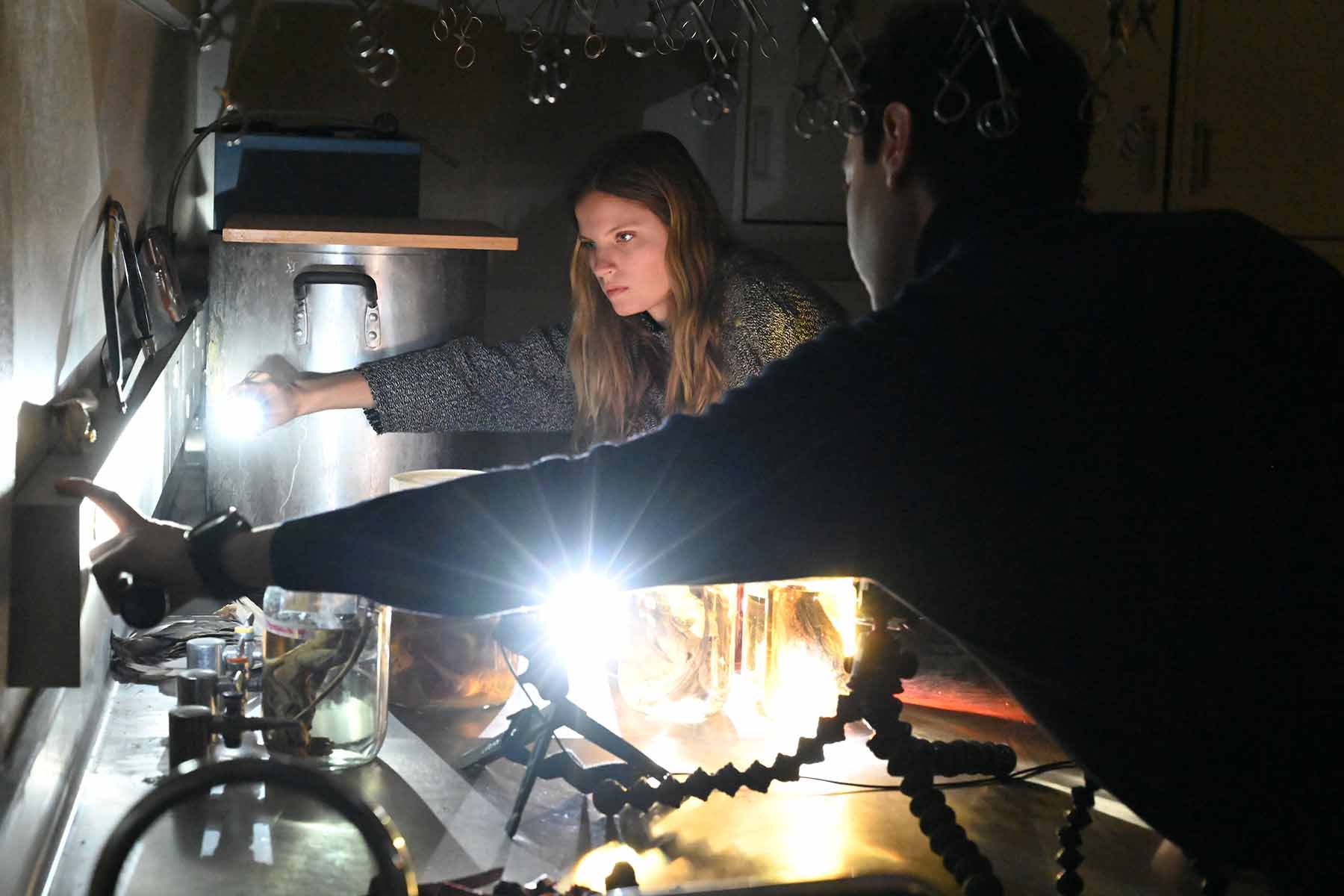 Madeleine Hordinski assists the photographer and assistant setting up lighting to get the perfect picture. Photo Credit: Larry Witmer 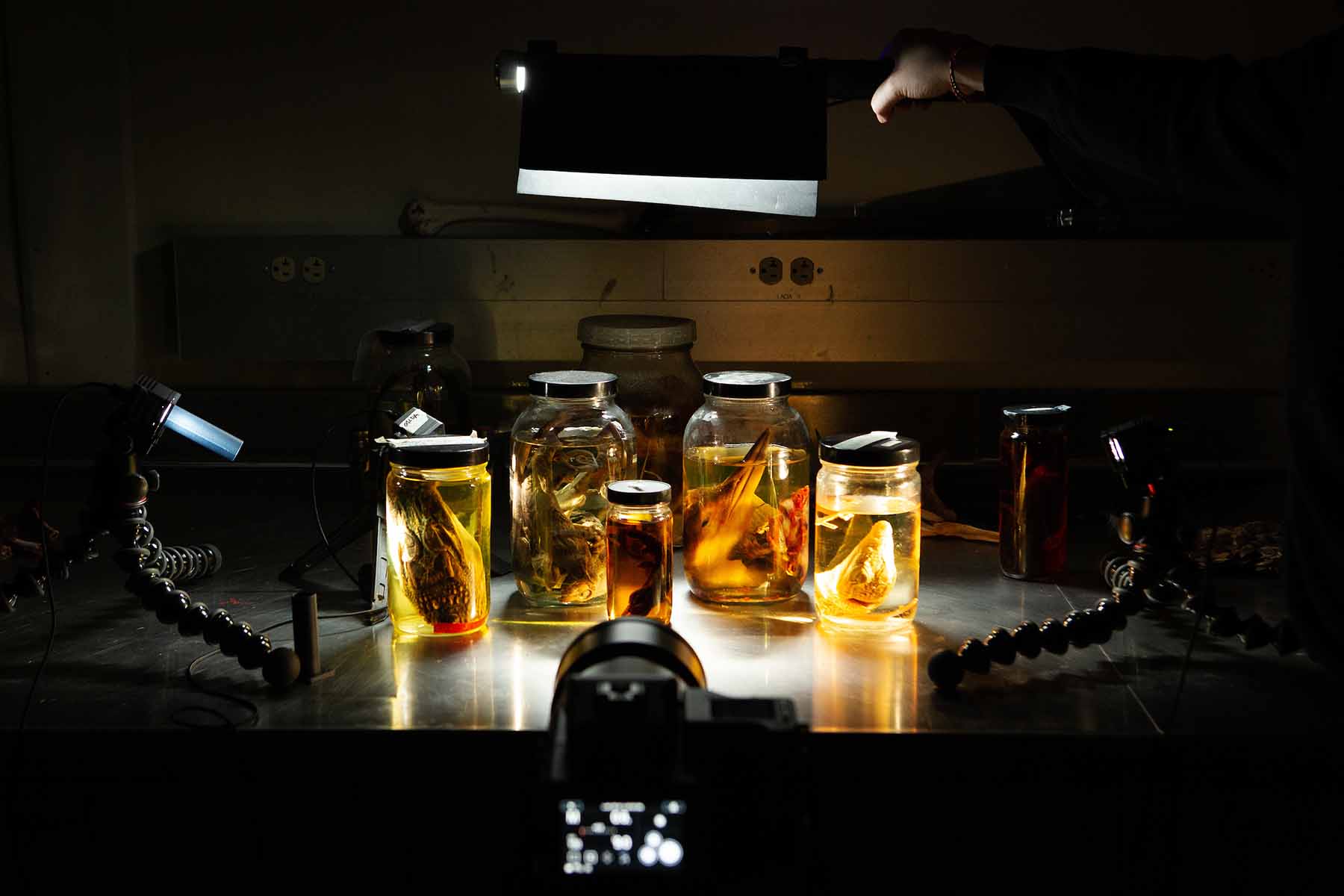 A back up look of the lighting instruments used to light up the jars. Photo Credit: Madeleine Hordinski

The Heritage College and OhioHealth have been partners for over 40 years, and Witmer has been working with O’Bleness Hospital since 1996.

“It’s a privilege to support the work of Dr. Witmer and his lab,” said Heather Rockhold, O’Bleness imaging manager. Rockhold has worked with Witmer for 21 years, providing access to and assisting with the imaging technology that makes his research possible. “We’re proud to be a resource for Ohio University and the WitmerLab.”

Two School of Visual Communication (VisCom) students, Madeleine Hordinski and Alie Skowronski, also took part in the visit as photographic assistants, after Witmer reached out to VisCom colleagues to see if any students would be interested. Both students, now seniors at OHIO, assisted the acclaimed photographer, who shared his knowledge and supported both students in taking their own photos.

Witmer and his team have discovered multiple noteworthy anatomical findings, including discoveries about dinosaur brain size, temperature regulation systems, and communication and breathing processes. More recently, Porter and Witmer co-authored a study that used CT scans in finding that some large dinosaurs may have evolved different types of cooling systems in different parts of their heads to combat heat stroke. This research is featured in the National Geographic article. 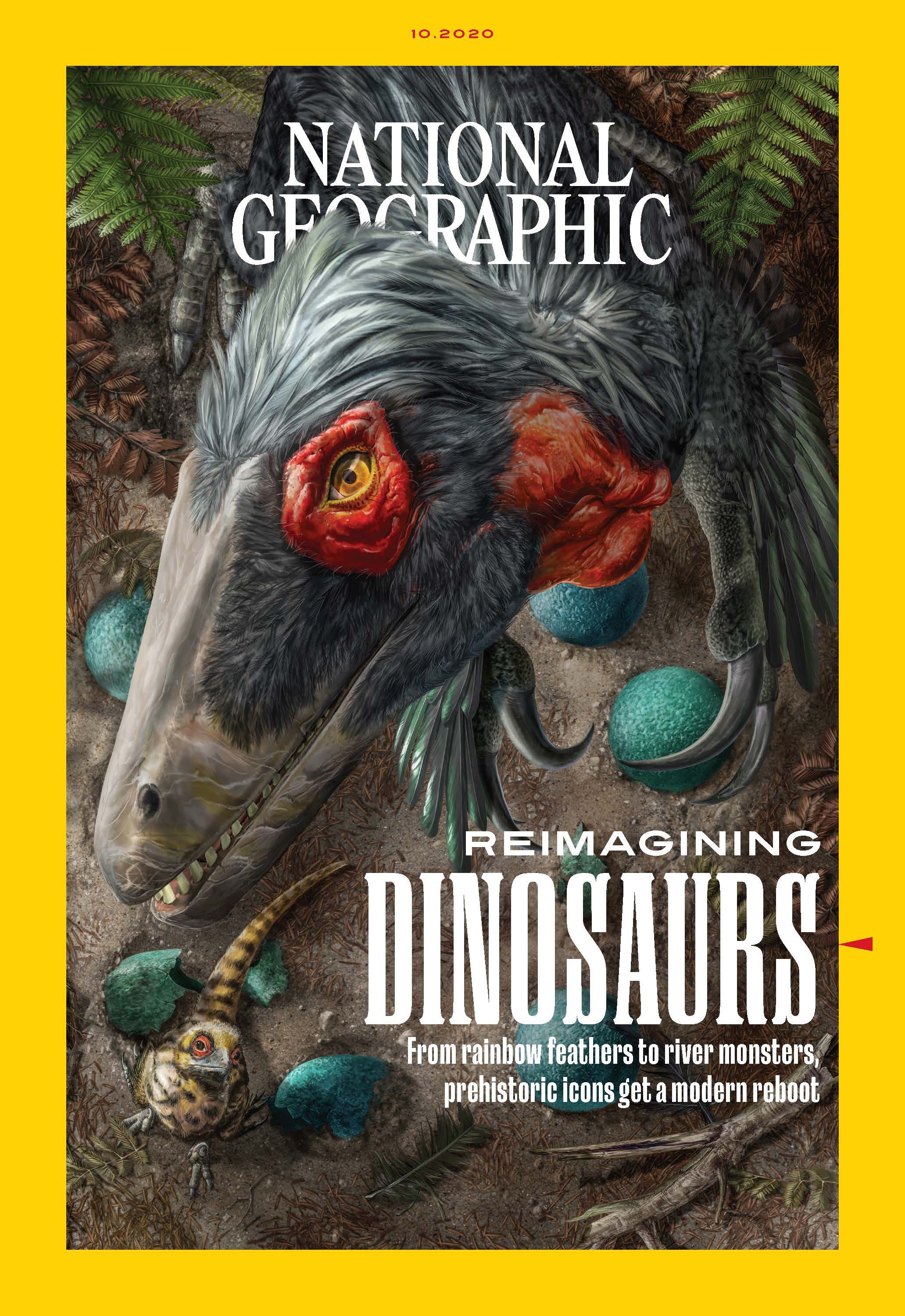 The virtual edition of the feature is now live on National Geographic’s website. For more information on this story, visit natgeo.com/dinos.