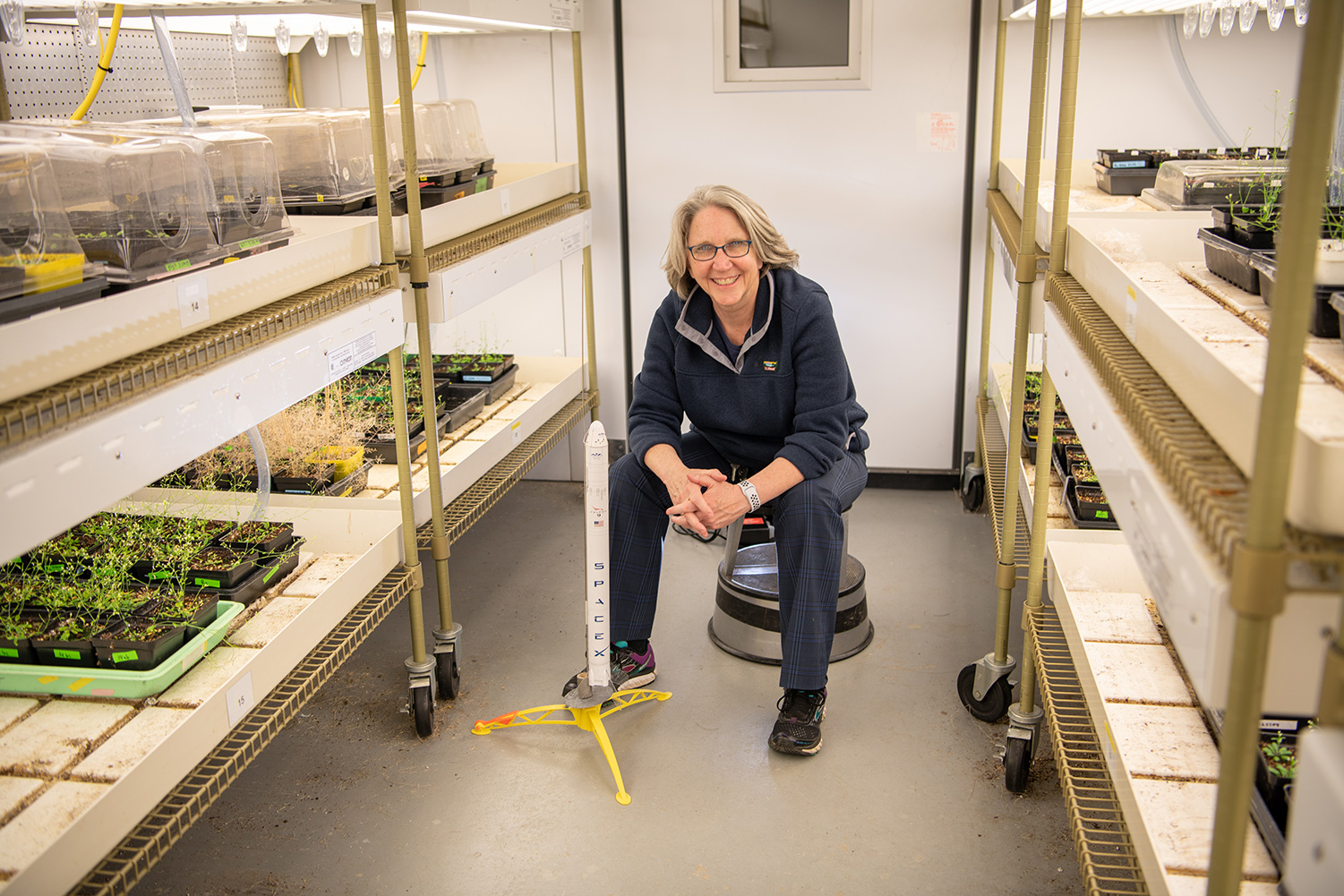 Dr. Sarah Wyatt, an internationally respected researcher in the field of plant gravity biology, was named a Fellow of two national organizations — the American Society of Plant Biologists as well as the inaugural cohort of Sigma Xi Fellows.

Wyatt is professor of Environmental & Plant Biology and director of the Molecular and Cellular Biology program at Ohio University.

“Dr. Sarah Wyatt has done a fantastic job of bringing science to people, whether to local students through the Tech Savvy program or the campus community through Science Café,” Ohio University President M. Duane Nellis said. “Her high level of scholarship and teaching ability are an invaluable part of our University, and I commend her for achieving these two fellowships.”

Wyatt was named a fellow of Sigma Xi, the scientific research honor society, for her distinguished accomplishments and contributions in research, teaching and outreach, and for her exemplary leadership of the Ohio University chapter, including a commitment to science literacy through Science Café.

“To me, Sigma Xi represents passion for science. As a first-generation college student, being inducted into Sigma Xi as a graduate student was an honor, but what it gave me was more than an honor. It made me part of a larger community of people passionate about science,” Wyatt said.

Wyatt has been actively engaged in the OHIO Sigma Xi Chapter for the past 17 years, serving as vice president from 2003-2018, during which time she founded Science Café, and president from 2018-present.

"Dr. Wyatt is an outstanding teacher and researcher who engages and challenges her students in the classroom and the research laboratory. The two Ohio University Presidential Teaching Awards that Dr. Wyatt has won in 2007 and 2014 stand as testaments to her excellence and dedication as a teacher who engages her students and leaves them with lasting impressions about what it means to be a scientist," wrote Dr. Allan M. Showalter, professor and chair of Environmental & Plant Biology, in his nomination letter.

“These metrics, however, fail to clearly illustrate the attention, commitment, and concern that Dr. Wyatt provides to the students that work in her lab now, as well as those who have graduated/moved on from her lab," wrote Showalter, citing her recruitment of diverse and first-generation students to work in her lab. "She continues to mentor her students after they leave her lab, providing them with counsel and letters of recommendation as they progress in their careers. It is clearly these deep, meaningful personal connections that Dr. Wyatt establishes with her students that make an impact in their lives."

Showalter cited Wyatt’s outreach efforts, in particular Tech Savvy and Science Café. Tech Savvy is an annual one-day program for girls in sixth through ninth grades that encompasses hands-on STEM workshops and team-building/leadership skills sessions as well as an opportunity for those students and their parents to interact with women in STEM careers. Science Café was started by Dr. Wyatt and is now in its eleventh year. During the academic year there is a café every other Wednesday in the student center coffee house, attended by more than 50 people each session.

“Dr. Wyatt worked closely with our Vice President for Research to build the program each year and was the emcee for 10 years," Showalter wrote.

Sigma Xi has a distinguished history of acknowledging scientific research excellence with the purpose of supporting "companions in zealous research and improving the human condition.” The society established the Sigma Xi Fellow Distinction to recognize selected members who have exhibited extraordinary service to Sigma Xi, and who have made significant contributions in research and development, outreach, teaching and curricular innovation, mentorship, leadership, and/or science advocacy.

The 2020 Inaugural Fellows of Sigma Xi will be celebrated at the 121st Virtual Annual Meeting in November 2020.

The American Society of Plant Biologists announced the recipients of its 2020 awards, given in recognition of distinguished and long-term contributions to plant biology and service to the American Society of Plant Biologists. Fellows, which may be granted to no more than 0.2% of the current membership each year, are recognized for research, education, mentoring, outreach, and professional and public service.

ASPB presented the award at a virtual awards presentation in July.

Wyatt has been a member of ASPB since 1996, serving in leadership in the regional sections for five years and in national ASPB governance as a member of the Executive Committee of the ASPB Council. She also served on various other committees and chaired the ASPB Education Committee.

Wyatt focused on bringing a better awareness of plants to biology curriculum and worked to increase diversity and inclusion in plant biology research and graduate programs. She also received the ASPB Excellence in Education award.

She also served as an associate editor of the academic journal BMC Plant Biology.

Wyatt is a plant molecular biologist and international authority on gravitational signaling in plants. Her research, including experiments on board the International Space Station, has provided novel insights about the genes involved in graviperception and will likely impact plant responses to microgravity in the human quest to colonize space.

Wyatt recently received one of 15 grants "for new space biology research designed to help the agency achieve its goals under the Artemis lunar exploration program. Teams of investigators will use state-of-the-art genetic and other biological techniques to explore how life adapts and changes during spaceflight, and the results could help support human exploration of the Moon, and ultimately, Mars," NASA announced.

In addition to her research, Wyatt has been involved in teaching and service on local to global scales. At Ohio University, she developed the Tech Savvy OHIO training program through her involvement in the American Association of University Women.