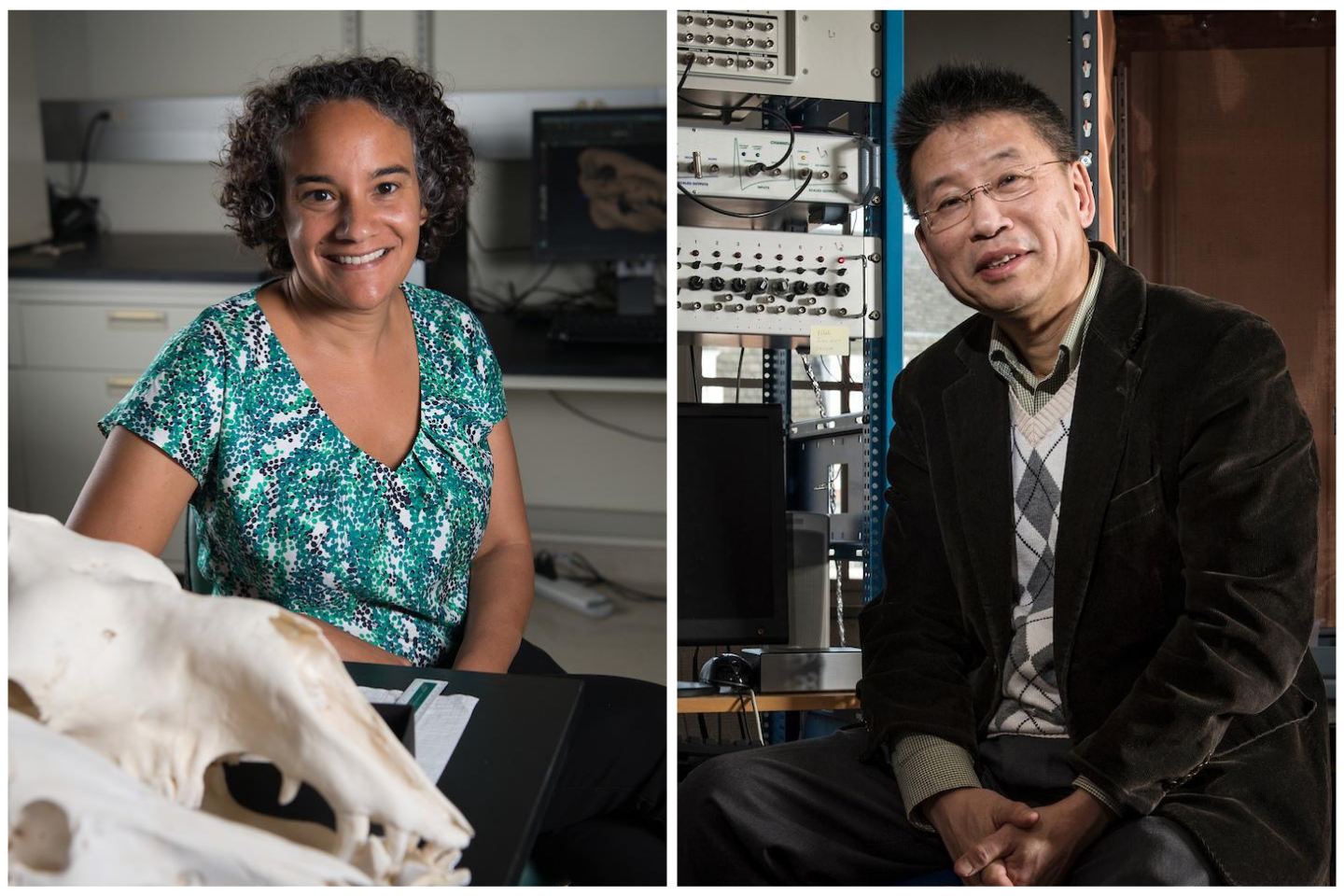 Photos by Ben Siegel/UCM and Heritage College of Osteopathic Medicine

Williams, an anatomy professor and associate dean of faculty for the Heritage College, received a grant to further her research exploring, at a fundamental level, how mammals (including humans) have developed the ability to feed. Her work focuses on the development of the nervous system, muscles and skeleton, starting from infancy.

More specifically, her current research looks to see what anatomical changes occur long term for babies that have texture-modified diets to treat dysphagia, or swallowing difficulties that lead to choking or aspiration.

Williams noted that humans, like virtually all mammals, begin life by obtaining nutrients through suckling, or nursing, and eventually switch to chewing solid foods. However, infants with dysphagia or other issues leading to choking may be placed on a texture-modified diet, which consists of mushy food, and are often kept away from solid foods for long periods of time. How long a child stays on these texture-modified diets could have some long-lasting effects.

“One of the hypotheses that I’m testing is that if you maintain children on these texture-modified diets long term, that you’re not even just doing them a sort of behavioral and life skills disservice, but you’re actually undermining the ability of their muscles and their nervous system in their bones to grow and fully mature,” Williams said. “So you’ve given them a treatment that is supposed to make it easier for them to swallow, but you’re also impacting their anatomy and their motor control to the extent that it is going to be harder for them to get off these texture-modified diets to consume normal foods.”

Williams and her team of students will use pigs as an animal model in the next step of her research. The plan is to raise the pigs with different diets, including a regular pig diet and a texture-modified diet that’s similar to what is used with infants with dysphagia.

Williams and her students will then examine the pigs’ jaw and tongue function and development during feeding, as well as the overall performance ability of the pigs to feed. She hopes to identify the physiological and anatomical impacts the texture-modified diet will have long term.

By understanding different phases of growth, Williams also hopes her research will determine if there are ideal stages to start transitioning pediatric patients with dysphagia to more of a solid food diet. This would help speech and language pathologists because they often work with children with dysphagia in addition to speech issues, due to poor motor control and oral coordination.

“Many speech pathologists’ patients have dysphagia,” Williams said. “So they have speech issues, but they also have feeding issues. It really is to help them, and to help [speech pathologists] understand that a long-term texture-modified diet could be a treatment that you may ideally wean off of.”

Li, a neuroscience professor, earned his grant to continue research into the effects zinc can have in relation to stroke, which occur when a blood vessel carrying oxygen and other nutrients to the brain is blocked and can be caused by blood clots. Previously, he has also done research into whether zinc is a neurotransmitter in the brain.

“This grant enables us to try to develop something for the treatment of stroke,” Li said. “We know how stroke happens, but we don’t have an effective treatment for stroke yet. That is why stroke is one of the leading causes of death and serious long-term disability because of damage to the brain. This is why effective medical intervention is critical for improving stroke outcomes.”

Currently, only one drug, tissue plasminogen activator (tPA), is approved by the Food and Drug Administration to treat acute thrombotic stroke. The drug dissolves blood clots to allow oxygen and nutrients to travel to the brain.

However, the chemical can also weaken the blood vessel wall, which can lead to bleeding in the brain, Li explained. Because of this dangerous side effect, tPA is rarely given to patients and only in very early stages of stroke onset.

In his research, Li looked at ways to co-apply tPA with something else to improve the drug’s efficiency without weakening  the blood vessel wall. That is where zinc, which can be found in blood clots, comes in. Li’s team discovered that zinc can actually inhibit, or affect negatively, the action of tPA.

“There is a lot of zinc trapped in blood clots,” Li said. “This is the reason why the clot sometimes is hard to break down, and tPA is not so effective.”

Li is investigating how to remove the zinc from the blood clot as soon as tPA starts dissolving it. Doing this, Li noted, they can use much less tPA and increase tPA’s efficiency in the treatment of stroke, while reducing the drug’s side effects and toxicity.

The new NIH grant will further his nearly 20 years of researching zinc at OHIO by allowing his lab to take the next step to study this process in animals. Eventually, he hopes this treatment could help many stroke patients.

“I’m pretty proud,” Li said. “I’m confident that this will work because we had very strong preliminary data and supportive data on this, and all we really need is to reproduce this in animal models.”

“NIH grants are highly competitive and sought after,” she said. “Anytime our investigators receive NIH funds, it not only opens the door to potential new treatments and breakthroughs in health, it also brings valuable opportunities for students to participate in cutting-edge research. This particular type of NIH grant has a goal of doing just that, exposing students to research.”

Both Williams and Li are grateful for their respective $453,000 grants.

“I’m excited that I can use this as a training opportunity for students. I love working with animals and students, so to be able to do that is pretty amazing,” Williams said.

“I’m excited because my lab can contribute something, small or big, to society and the community’s wellbeing,” Li said.

To learn more about OHIO’s Heritage College and its research endeavors, click here.