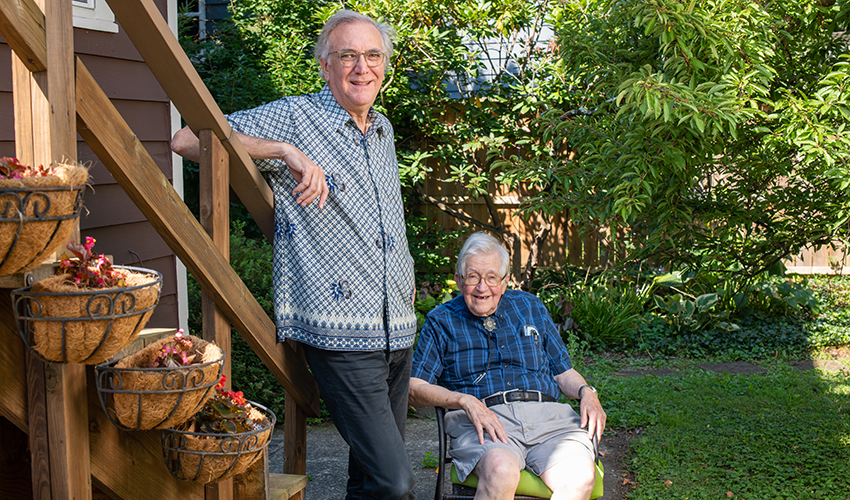 Ohio University faculty don’t just educate students. They mentor them and serve as sources of support in ways big and small.

That’s particularly true when it comes to the support offered to international students whose college experiences land them thousands of miles away from home and often begin with culture shock and language barriers.

“I really struggled during the first year of my graduate degree,” said Bin Yang, MSJ ’94. “I was not sure if I would finish the program.”

Yang, who came to OHIO from Beijing, China, went on to graduate with honors from the E.W. Scripps School of Journalism, completed an internship with Turner Broadcasting and continued training with the global media company after graduation.

“Dr. Culbertson and Dr. Stewart were professors whose office doors were always open, “ said Yang. “I never felt awkward or nervous talking to either one of them. During my two years in J-school, it was a great comfort to know there were people I could talk to who were willing to help me with the difficulties I encountered as an international student.”

In the early 1990s, Yang was a public relations professional working in corporate communications at Beijing-based China International Investment Corp. In that role, she worked with several high-profile U.S. companies, including pharmaceutical giant GlaxoSmithKline.

“I felt self-conscious because my English and understanding of American culture weren’t up to the level I needed to properly handle my job,” she explained. “I badly wanted business training.”

Yang applied to graduate programs in the United States and was admitted to OHIO’s E.W. Scripps School of Journalism with a merit scholarship, without which she would have been unable to afford the tuition.

Upon arriving on the Athens Campus, Yang said she was surprised to find so many international students, including several from China, India and Africa who were also studying in the University’s journalism program.

“Every single day at OU was new and eye-opening for me,” she said. “My life in Athens was filled with life-changing experiences.”

She met Chen, her future spouse, at Scripps Hall’s Lasher Learning Center where he was a research assistant. Chen had enrolled at OHIO a year before Yang and was also from Beijing, where he was a reporter for China Daily, at the time the nation’s only English-language newspaper.

Both Yang and Chen studied journalism and American life under the guidance of Culbertson and Stewart.

“I don’t think we would have survived our graduate school experience, which was quite vigorous at the J-School, if we didn’t have professors like them,” Yang said.

Culbertson bought Yang her first chicken salad, introducing her to the novelty of cold meat, and served as her thesis chair advisor.

“It was amazing to finish a thesis over 100 pages and entirely in English,” Yang said. “Dr. Culbertson took the time to answer my questions and make sure that I understood what he meant. He provided us with additional resources and moral support.”

Culbertson joined the faculty at the E.W. Scripps School of Journalism in 1966 and retired in 1994, but continued to teach part time until 2003. He served as the school’s graduate coordinator for approximately nine years and was the advisor for the Chinese Student Association.

Yang got to know Stewart through her coursework, where she developed an interest in television advertising. Stewart was able to connect Yang with his contacts at Turner Broadcasting, the parent company of CNN, which resulted in her landing a two-month internship in advertising sales at the company’s New York City office. After graduating, she returned to New York to finish practical training with the company.

“I had never worked in America or for an American company,” Yang said. “To live and work in New York City was pretty cool.”

After working in New York for a few years, Yang and Chen brought their family to Asia. A few years ago, they relocated to Seattle where Chen works for Merrill Lynch.

Over the course of their careers and life together, Yang and Chen never forgot the roles Culbertson and Stewart played in their professional success. They returned to the Athens Campus for the first time since graduating in 2019, getting their first look at OHIO’s Schoonover Center – the new home of the Scripps College of Communication – and reconnecting with Culbertson and Stewart.

During that trip, Yang said they were inspired by Stewart who, with his wife Dr. Penny Shelton, had created the Scripps Future of Journalism Scholarship in celebration of the 100th anniversary of the E.W. Scripps School of Journalism, which will be celebrated in 2023.

The couple not only contributed to that scholarship but, upon learning about Stewart’s retirement after 33 years on the faculty at the Scripps College and 10 years as director of the E.W. Scripps School of Journalism, created their own scholarship in honor of both Stewart and Culbertson.

The Dr. Hugh Culbertson and Dr. Robert Stewart Scholarship in Journalism will benefit students enrolled in the Scripps College of Communication with preference given to those majoring in the E.W. Scripps School of Journalism programs. The scholarship was created in partnership with The OHIO Match, an undergraduate scholarship investment program through which Ohio University has pledged up to $25 million to strengthen its endowed scholarship program. Through The OHIO Match, the University will provide $0.50 for every dollar committed to eligible scholarship endowments. The program runs through June 30, 2024.

“We really wanted to honor these two professors because they were very special to international students,” Yang said. “This scholarship is also a way to help students pay for tuition and be able to attend Scripps, encouraging future journalism students to strive for academic excellence at the E.W. Scripps School of Journalism and beyond.”

For Professors Emeriti Culbertson and Stewart, the scholarship is more than an honor.

“It’s very rewarding,” Culbertson said of the scholarship. “It makes me feel like I have a continuing involvement with the School of Journalism. Bob Stewart is a person who had a good impact on my career here, so I’m also honored to be linked to him in this scholarship.”

For Stewart, who retired in June, the scholarship is as much about his past role with the Scripps College as it is about the future.

“Thanks to these endowed scholarships, long after I’m gone, someone will still be receiving this scholarship, which will be a great reminder of the role I played in the school of journalism, which is a great honor,” Stewart said. “To be in the same sphere as Dr. Culbertson is truly a double honor.”