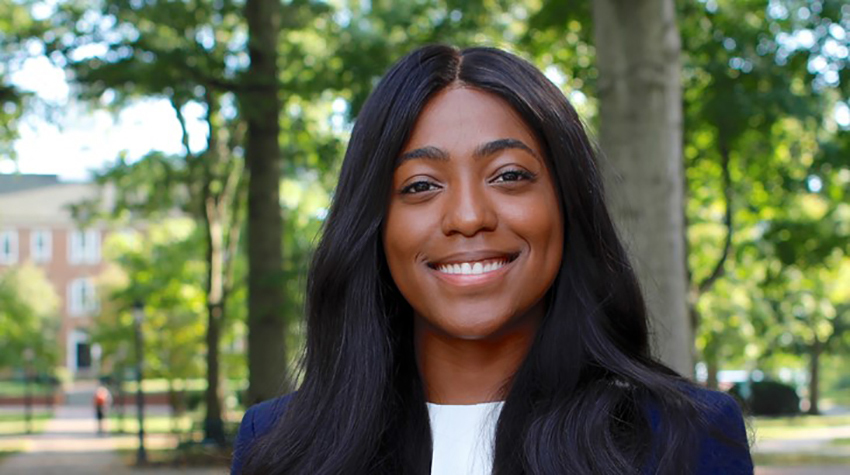 Sierra Smith graduated from Ohio University’s College of Business in May and is now a financial analyst for Dell Technologies, where she was offered a job before her senior year.

Many first-year students come into college with a general idea of what they want to do professionally and in need of the skills and a roadmap to those dreams. Recent Ohio University graduate Sierra Smith, BBA ’20, left college not only with those skills but with life-changing experiences and a job offer—a year before she graduated.

Smith graduated from the College of Business in May with a degree in finance and a minor in business analytics, areas of study that piqued her interest watching Shark Tank when she was in high school. She knew she wanted to own a company in the future, but she also was interested in the financial side of running a business. When Smith started taking courses in the College of Business, she learned all about what finance really is and where her degree could take her.

Immersing herself in opportunities and experiences for personal and professional growth helped Smith secure a full-time job offer from Dell Technologies before she even started her senior year at OHIO. Today, she is a financial analyst in the company’s Financial Development Program in Austin, Texas.

From Reserved Freshman to Active Student

Coming into college, Smith’s personality was much more reserved than it is now, but she was excited to start her new journey, to meet new people, and to push herself out of her comfort zone. Her goals and interests gradually started developing when she realized how big of an influence the College of Business was going to have on her experience during her next four years.

“I became ambitious once I saw the possibilities and how much I could grow,” said Smith. “I’ve learned the value of building relationships and taking the time to develop mentally, physically, and spiritually.”

Throughout her college journey, she experienced an array of opportunities and learned so much about herself as a person and as a young professional. Although she is aware and proud of her achievements now, she didn’t know what all she was capable of accomplishing before she became a business student at Ohio University.

Smith became heavily involved in organizations and took advantage of several opportunities from the second she stepped foot on campus. She applied and was admitted to the Derivatives Management Group and the Select Leadership Development Program by the end of her freshman year. When sophomore year came around, she ran for Student Senate on the Green Light ticket and became a Senate Appropriations Committee member.

A New Perspective on the World

While these opportunities greatly contributed to her college experience, something that really gave her a completely new perspective on the world occurred after sophomore year when she studied abroad in Thessaloniki, Greece, through the College of Business’s Global Consulting Program. On this trip, she worked with other OHIO business students, as well as engineering and international students, who all visited the local university for a consulting project. Her team worked with an elevator company, touring its facility and asking questions in order to craft a proposal and presentation to boost the company’s online presence.

“This experience was so unique to me because learning about international business and experiencing it firsthand are two different things. I learned that what you know is not nearly as important as who you are, what you value, how you learn, and how you handle struggles and uncertainty,” Smith explained. “After this trip, I started focusing more on those things, and, of course, I gained a love for Greek food as well.”

Her Impact on the College of Business

These newly formed ambitions and her desire to make a difference inspired her to start and lead a student organization called Association of Women in Finance with five of her peers during her junior year. She started this organization because she wanted other women to have a community intended just for them. Smith sometimes felt alone in her finance classes because she was often one of the few females in the room, and she didn’t want women to feel that way anymore.

“I knew I wasn’t alone, but there was no community in place for me and the women like me. This responsibility taught me what it means to build something from the ground up,” said Smith. “More importantly, it taught me the significance of being able to stand alone on my own two feet. As president, I was the face of the organization and I had to be responsible for everything that happened while simultaneously being a driving force within the group.”

Smith credits her growth and successes to some of her greatest influences—her professors and her friends at OHIO. They constantly inspired and motivated her to be the best version of herself through mentorship, as well as regular friendly conversations.

“My greatest resource was always the professors. I made it a habit of always stopping by different faculty and staff offices to ask questions and pick their brains and sometimes just chat. Many of them were successful in the industry and had done everything I was trying to figure out,” Smith explained.

Learning About Business in Different Cities

In addition to the amazing influences Smith surrounded herself with, she also grew immensely through the several trips she was able to participate in with the help and guidance of the College of Business. She went to Chicago for the first time during her freshman year and saw the Chicago Board Option Exchange and was even able to walk across a trading floor. The following year, she visited Detroit, where she got to see the GM headquarters, and later went back to Chicago to visit LinkedIn and Whirlpool Corporation during her junior year. That summer, she had the exciting opportunity to travel to Austin, Texas, to intern with Dell Technologies. Once senior year began, she went on a trip to San Francisco, where she visited Google and networked with OHIO alumni at Apple. All of these unique trips and opportunities helped solidify Smith’s decision to go into the business industry.

“Every trip gave me the chance to go to places I had never been and learn about different ways of business. I met so many amazing people who were open and willing to share their life stories and what they did every day. It’s much easier to imagine a career when you have someone who has already done it and is more than willing to help,” Smith explained. “These trips were the most impactful because they helped me realize how big the world is and that opportunity is everywhere.”

Reflecting on Her College Journey

In addition to traveling to different cities, states, and even countries, Smith was also a student ambassador for the College of Business, a LINKS peer mentor through the Office of Multicultural Student Access and Retention, and a founding member of the Bobcat Seed Fund in the Center for Entrepreneurship.

“I am so thankful for every single person that invested time and energy into me,” Smith said. “Being a business student here helped me build some of the most important skills I have today, exposed me to experiences that shape the way I see the world, and armed me with the tools to continue developing myself well after graduation.”