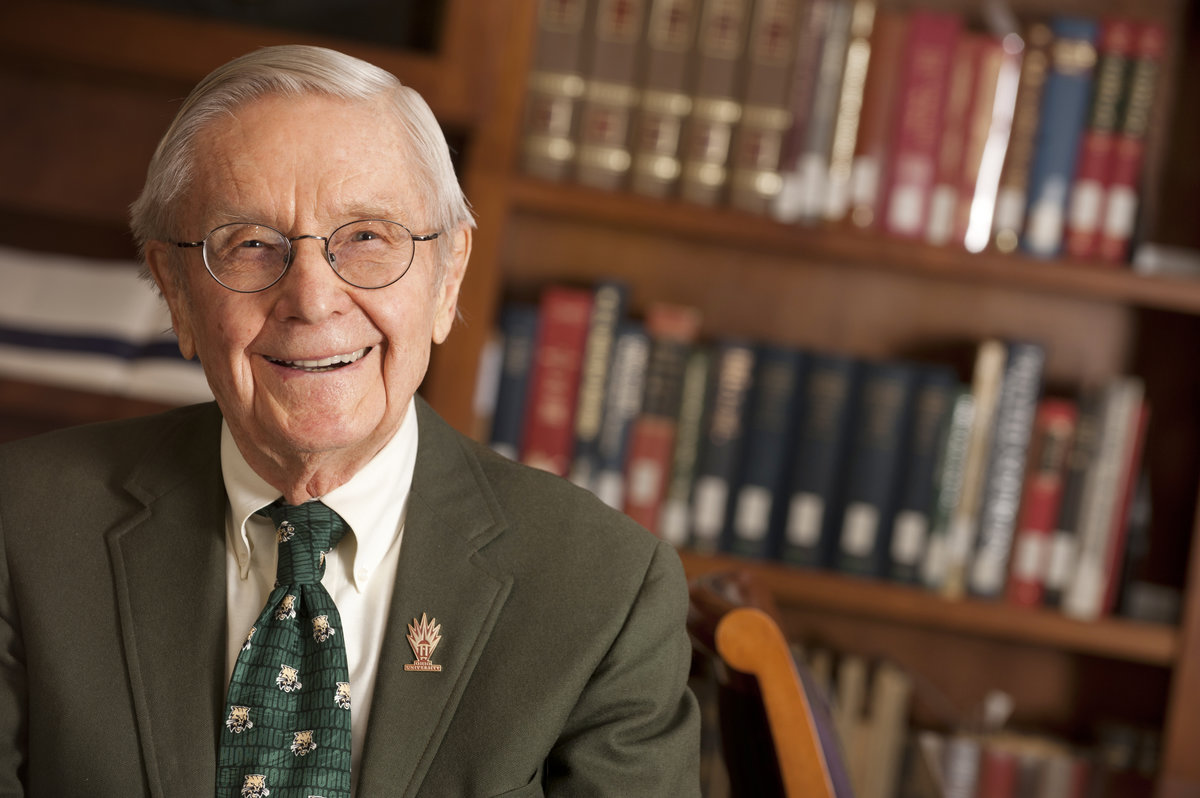 Ohio University mourns the passing of President Emeritus Vernon Roger Alden, who died in Boston on Monday, June 22, 2020, at the age of 97.

“President Alden was a visionary leader who guided Ohio University through a time of tremendous growth and change. The initiatives that Dr. Alden led have benefited generations of students and will continue to do so. He remained involved with Ohio University throughout his career, and I appreciated the insights, support and guidance that I received from him,” Ohio University President M. Duane Nellis said.

Alden served as the 15th president of Ohio University from 1962 to 1969. During this period, Alden and his administration saw a doubling of enrollment and staff. His administration expanded research and academic programs including the Honors College, the Cutler Program of Individualized Study, sabbatical leaves, the Ohio University Press and area studies including funding a Black Studies Institute.

"Dr. Alden developed academic programs and initiatives during his tenure that have had a lasting legacy, benefiting countless Ohio University students. This includes the reestablished Ohio Fellows program, which continues to connect students from diverse backgrounds with faculty, peers, alumni, and mentors outside the university to develop students' unique potential to make a significant impact after graduation. He fostered a culture of academic innovation that Ohio University has continued to embrace in the years since his presidency,” Ohio University Executive Vice President and Provost Elizabeth Sayrs said.

In 1964, U.S. President Lyndon B. Johnson appointed Alden the chairman of the Task Force Planning and the United States Job Corps and chairman of the Education Advisory Committee of the Appalachian Commission. Alden was given the responsibility of revitalizing the economy of Southeastern Ohio. Some of his accomplishments included developing the Appalachian Highway Network, re-routing the Hocking River to cut down on Ohio University flooding, and building six branches of the University throughout Southeast Ohio.

Alden Rainbow is a primary school in Nigeria named in his honor for his visits to Ohio faculty members teaching in Nigeria on USAID grants.

Upon his retirement from Ohio University, Trustees named the new library the Vernon Roger Alden Library. He also received the Governor's Award, a citation from the State of Ohio Senate and the Outstanding Civilian Service award from the U.S. Army.

“Dr. Alden’s leadership, vision, and love of learning will live on for generations at the University. We at the Libraries are especially grateful for Dr. Alden’s strong belief in the library as the academic and cultural heart of the institution, and for his advocacy that led to the construction of Alden Library. His name will forever be synonymous with libraries at OHIO,” Neil Romanosky, dean of the University Libraries, said.

After leaving Ohio University, Alden took over as chairman of the Boston Company and its subsidiary, the Boston Safe Deposit and Trust Company, from 1969 to 1978. He served on several corporate boards and visiting committees and was very involved in U.S. and Japanese affairs and Japanese culture. For more than 40 years, he was president or chairman of the Japan Society of Boston.

Thirteen colleges and universities have conferred honorary degrees upon him, and in 1975 the Harvard Business School Alumni Association gave him its Business Statesman Award. He received a similar award from Brown University alumni in 1987. Alden was elected to Ohio University Hall of Fame in 2006.