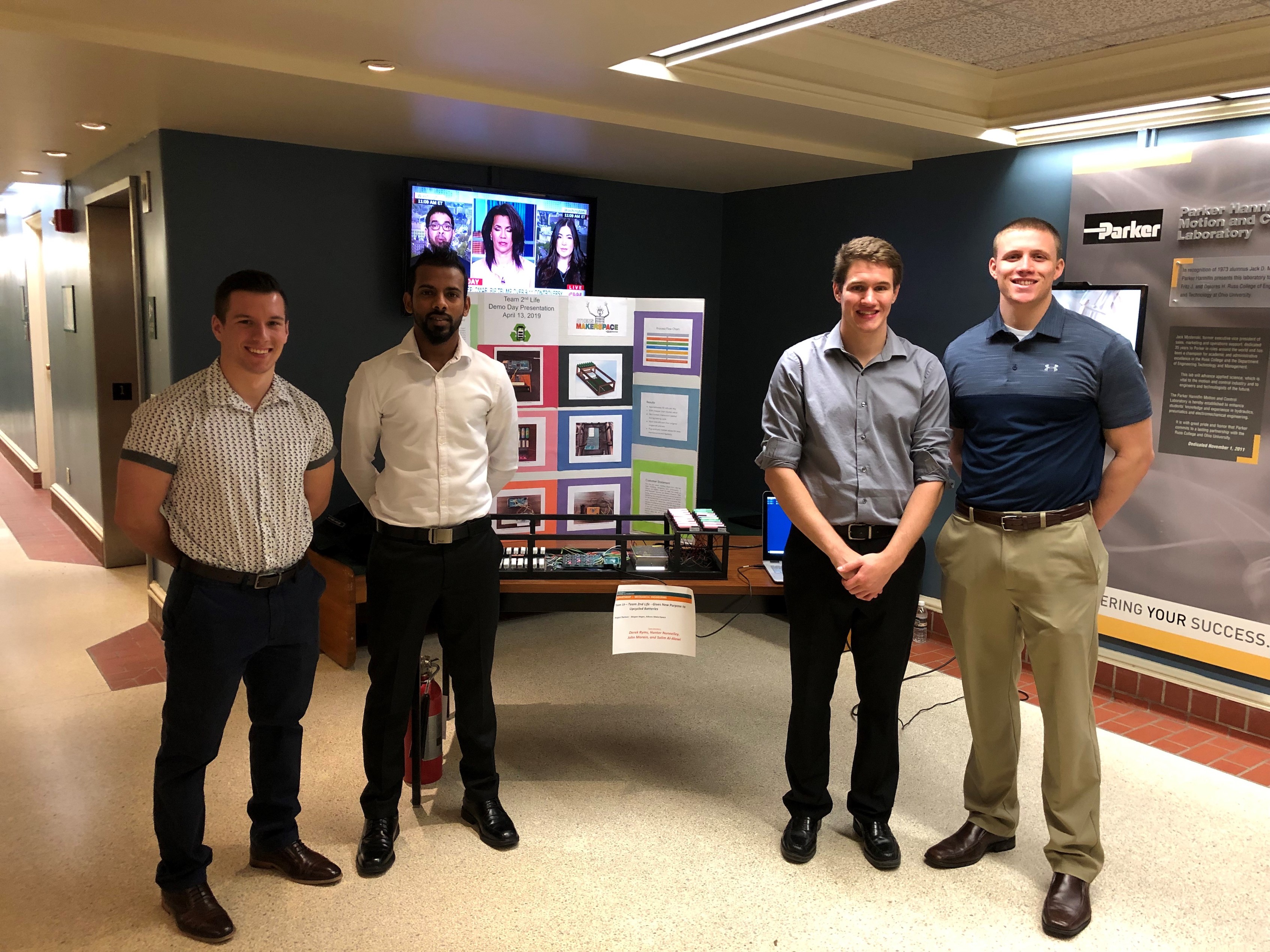 A local non-profit, with design help from OHIO students, is working on a system for salvaging lithium ion batteries and turning their still-working components into a new battery system.

The RePower Second Life Battery Network would keep batteries from laptops and household power tools out of landfills by extricating the good cells from the battery and repackaging them in a new battery pack, said Roger Wilkens, executive director of The Center for the Creation of Cooperation (CCC).

“The research is showing that there are millions of these cells, a rapidly increasing number of electronics and power tools and medical devices,” Wilkens said. “At least with the electronics and computers, 80 percent of the cells still have life left in them, but when one cell in the pack goes bad, it’s discarded and ends up in landfills.”

CCC has collaborated with Dr. Greg Kremer, Robe Professor of Mechanical Engineering in the Russ College of Engineering and Technology, who has led three cohorts of students through capstone projects related to the project.

Kremer said the existing lithium ion battery packs have individual power cells that are permanently connected, but the pack is only as strong as its weakest power cell. Therefore, when one cell goes bad, the battery becomes unusable and is often discarded.

“Most of the cells have enough life that they could keep working for years,” Kremer said. “Ultimately this project is designed to build these packs so they’re easy to open and change the bad cells.”

Morgan Hager, program engineer for CCC, has experience working in the solar power industry, and knows there is a growing appetite for people to have backup energy storage in their homes, whether from solar panels or a conventional power grid. But such systems are expensive, she said, and meanwhile, there are millions of lithium ion batteries being discarded despite having plenty of good power cells inside them.

“On one hand we’re seeing this waste product, and on the other, we’re seeing this prohibitively expensive technology,” Hager said. She and Wilkens envision a system for cracking open discarded or recycled lithium ion batteries, salvaging the good cells, and repackaging them into a new pack that can be easily opened so cells can be replaced. The RePower packs would be available at roughly the same initial cost as standard battery packs, and operating costs would be lower since future replacements would be of individual cells instead of full packs. “It’s a device designed to use the last remaining energy in these cells.”

One of the student cohorts developed a process for cracking open the battery cases in a safe and effective manner, while another cohort developed a 16-cell capacitance tester with data acquisition to make the process of identifying the good cells easier and faster. A third team is currently working on designs for the cell holder that performs like the permanently connected cells but allows easy disassembly and replacement of individual cells. Some of the other development work has also been done in the Additive Manufacturing Lab in the Innovation Center.

CCC is looking to collect as many spent lithium ion batteries from cordless power tools and laptops as possible to serve as feedstock for their work.

“We’re building prototypes of products, everything from large stationary storage to small battery packs,” Wilkens said. “Our intention is to do the basic research prototype development and develop the community-based collection network. A lot of these cells sit in the basements and garages and then get tossed in the trash.”

Ohio University Campus Recycling has agreed to collect batteries and pass them on for the project. They can be dropped off in green e-waste cabinets, which can be found in most academic buildings on campus to collect small-scale, difficult-to-recycle items.

“We love to support local entrepreneurs that are also finding new and creative ways to reuse. This program keeps toxins out of our landfills and gives new life to valuable resources,” Ohio University Recycling and Zero Waste Coordinator Joanna Sokol said.

These e-waste cabinets are for household or on-campus-derived items only and are not for business use. Large items or a large quantity may be able to be recycled, but the individual should contact recycle@ohio.edu to make arrangements. Any lithium ion batteries dropped off, as well as any battery 9 volts or higher, must have their terminals taped before being dropped off.

“They have helped us as much as we are helping them. Some of what we have learned working with RePower has been an important part of revamping our battery collection systems, making them more efficient and safer,” Ladd said.

If the project is successful, Wilkens envisions a series of community hubs where old batteries are converted into newer ones, with the first one in Athens.

“The intention is to organize a network of community-based worker cooperatives that will provide local employment to people,” Wilkens said. CCC is seeking additional funding in order to advance the project further.

CCC has already worked with the Social Enterprise Ecosystem in the Voinovich School of Leadership and Public Affairs, conceptualizing a business model, evaluating strategic partners and other preliminary work.

Kremer said he supports the venture.

“Let’s create an economy around these waste batteries and have a product that we can hopefully manufacture here in Appalachian Ohio,” Kremer said.