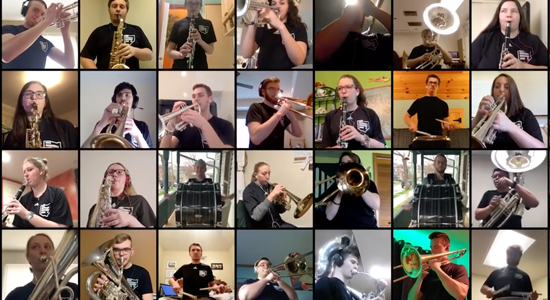 On March 31, Bobcats across the state watched with pride as Governor Mike DeWine highlighted the Ohio University Marching 110 at the end of his daily COVID-19 press conference.

Governor DeWine applauded the virtual performance, which he dedicated to all healthcare workers and first responders across Ohio who are risking their lives to save others.

The performance shows numerous members of the Marching 110 remotely playing OHIO’s fight song, “Stand Up and Cheer,” proving that although they are all apart, through technology they can still come together and be one ensemble.

Dr. Richard Suk, director of the Marching 110, got the idea to create this virtual performance from watching other, smaller ensembles create similar videos and hoping it could be recreated with the whole band.

“We wanted to do something to cheer us all up and show that we are still all together and going strong,” Suk said. “Although the entire band was not able to participate, it ended up being a much bigger project than we imagined.”

Suk explained that he asked students who were able to participate to record themselves playing their individual part of the fight song while listening to a recording of the entire band playing it. Once all the recordings were done, the videos were then sent to one of the band’s percussionists, Ricky Reinzan, who is a third-year integrated media major, to edit all the videos and sound together to create the final video.

“Each recording was different since students used whatever device they could to record and were spread among their own locations,” Suk added. “So it really was incredible how well Ricky was able to put all of that together, and I think the circumstances of not having a professional recording device, or the nicest instruments at hand to use is indicative of the time we’re in and made the performance even more real.”