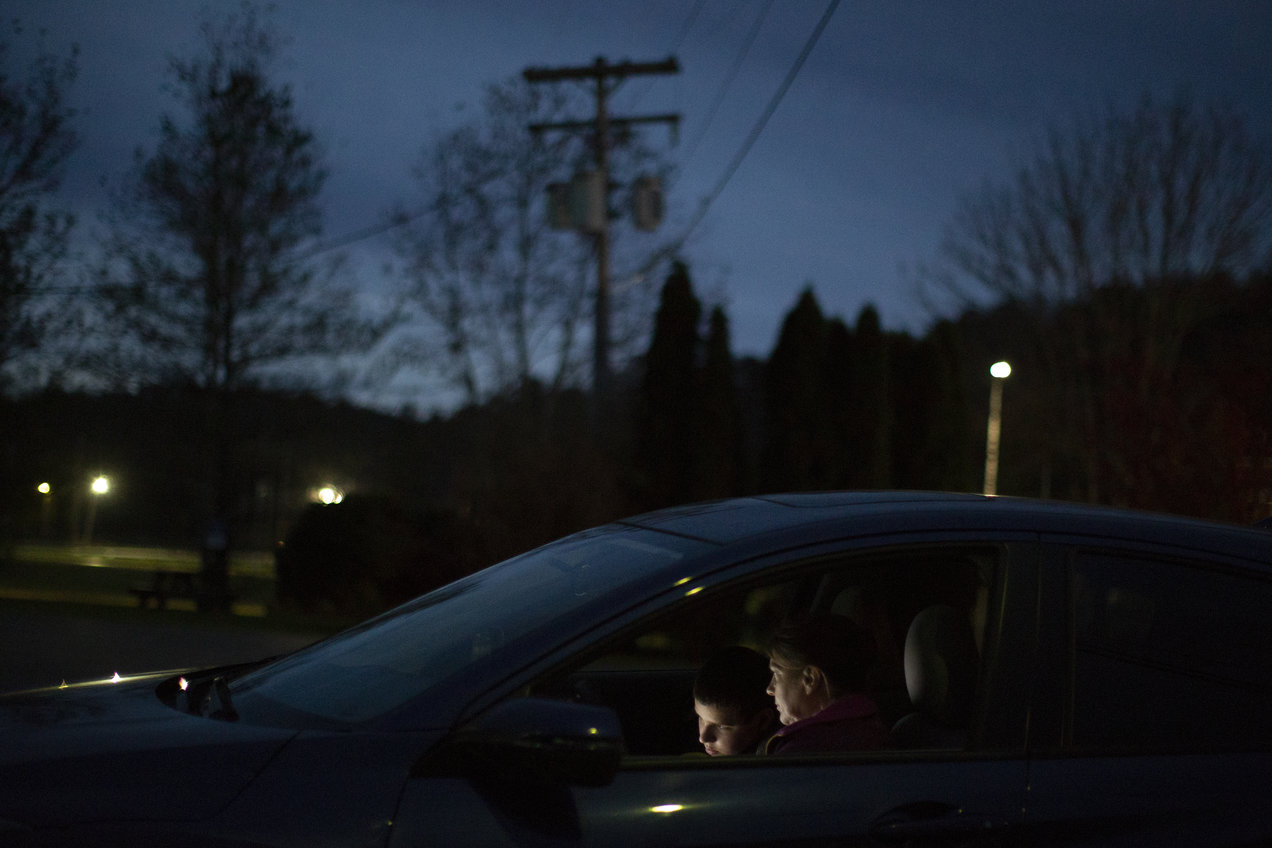 Liz Moughon Maggi Gifford and her grandson Hunter Blosser, 13, park outside the library in Glouster, Ohio, to use the Wi-Fi. As Americans anticipate the arrival of 5G wireless technology, it’s easy to forget that millions of people across the U.S. still have no broadband internet access in their homes. According to a 2019 Federal Communications Commission report, 21.3 million Americans lacked a broadband internet connection at the end of 2017.

In some towns in southeast Ohio, more than half of a library’s Wifi usage comes during hours when the library is closed. People use it from the parking lot at all hours – it’s often their only internet access.

In this area, for some students, their only access to the internet to do research for class is from their smart phones, a challenge when some sites aren’t optimized for mobile. Adding to the challenge – they’re on prepaid data plans which are immensely slow.

Liz Moughon, a recent Ohio University alumna, was drawn to tell these stories as broadly as possible, yet she had no idea that one day her piece would appear in the Wall Street Journal, drawing national attention to just how limited broadband access is in portions of southeast Ohio.

Moughon’s project, The People Left Behind in a Broadband World, visualized this lack of highspeed internet access across southeast Ohio and told the story of several people and businesses affected by this. The story was picked up by the Wall Street Journal in November 2019, almost six months after she graduated from Ohio University and an entire year after putting together the story.

At the beginning of Moughon’s senior year, she was challenged to find a topic for her capstone project that went beyond what was happening in the university community. After being instructed by her photojournalism professor to attend a Student Senate or City Council meeting, she learned just how big of an issue broadband access is to the rural communities around her.

“When I attended these meetings is when I first heard about the lack of broadband access in this region,” Moughon said. “I had no idea the extent of it because we’re fortunate that this doesn't affect us at the University, however, once hearing how many people are affected by this, I knew it was an important story to tell.”

Although it was a topic she knew needed serious discussion, the concept of writing a story focused solely on technology was initially out of her comfort zone.

“Technology has never been a huge interest to me,” she said, but little did she know the impact her photos and story would leave on the rest of the world.

“We all want to be connected,” Moughon said. “This area already has a disadvantage with it being one of the poorest counties in Ohio. Everyone is working as hard as they can to keep up and they deserve recognition for that. They deserve a fair chance and accessibility to today’s necessities.”

She credits her professor, Stan Alost, for shedding light on the community around her. He encouraged his students to get out of the University bubble and to think about different angles and research that could make for an interesting and important capstone project. He was clear in wanting the students in his photojournalism class to explore topics outside of the University, instead of asking students to interview other students he asked them to engage with the community so they could step outside their comfort zone in the classroom.

“Students in the class have to come up with the story ideas, research them, and then propose the story just like they would do at a publication,” Alost said. “Then each student photographs, writes, and designs the presentation of the story for print or on the web. Liz not only delved into the community for this project but took a topic that isn’t always easy to see and made it interesting and visual.”

Moughon didn’t think much about her capstone project after turning it in, saying the pitch sat in the drafts folder of her inbox for months. It wasn’t until the Wall Street Journal published a story about a presidential candidate pledging to put more funding into broadband expansion that Moughon sent in her piece.

“She realized the impact this story could have if it was made available to the public, so she used her breadth of skills to pitch this important project to the Wall Street Journal,” Alost said.

The very next day, she received the response that would allow her insightful story to reach over a million readers and allow the often-overlooked faces and voices of individuals in Southeast Ohio to be seen and heard.

In Moughon’s story, she explains and shows the lengths to which some must go to gain access to the internet, capturing images of families sitting in their cars for hours in the parking lots of public libraries that offer 24/7 free Wi-Fi. She also includes how her photos don’t only show just what it’s like to go without broadband but how much harder it is for individuals to conduct research for schoolwork, grow their own business or even find work online.

“In a globalizing world, broadband has become essential,” Tiffany Arnold, associate director of the Appalachian Rural Health Institute, said. “In an economy that has struggled for decades due to extractive industry and its boom and bust cycles, people are seeking new fields of employment continuously. To be competitive they need to be able to access the internet so that they can apply for jobs and be able to work remotely in jobs that may be based somewhere else. It is even more vital to rural communities that lack diverse industry that residents have access to broadband from home.”

She also includes how businesses in the region, such as Snowville Creamery, struggle with access to internet, which poses challenges when it comes to processing data for orders and communicating with customers.

Moughon said that by going out into the community to do stories like this, she created lasting relationships with people she would’ve never met otherwise. She was able to immerse herself in more Athens-based initiatives, like the Athens Farmers Market.

“There was a family I did a story on my sophomore year and we became great friends over the course of it,” Moughon said. “I continued seeing them and having dinner with them since.

“I've learned so much from this whole process because I know as a journalist, you realize how much responsibility you have for carrying someone else's story and how you have to be truthful, honest, and respectful.”

Moughon continues to speak on the impact her story had on its readers, something she did not anticipate prior to the piece being published. She explained how she was even contacted by a young man from Seattle who writes grants for co-ops that provides funding for satellite towers who wanted to share the visuals of the impacts lack of access has on people.

“A photographer doesn't just take the photos,” she explained. “They interpret the story visually and it takes a lot of research and a lot of thought. I think having the responsibility to do all the research and writing helps me make better photos and helps me understand the issue better. Perhaps that's just an exercise to make you stronger.”

“We’re guests in Athens for four years, so I owe it to each person in this story who has shared a piece of their journey. It’s easy to hear about an issue and then forget if it doesn’t affect you. The real champions are these locals who stay longer than four years and continue to fight for better access. They are the future of growth in rural America."