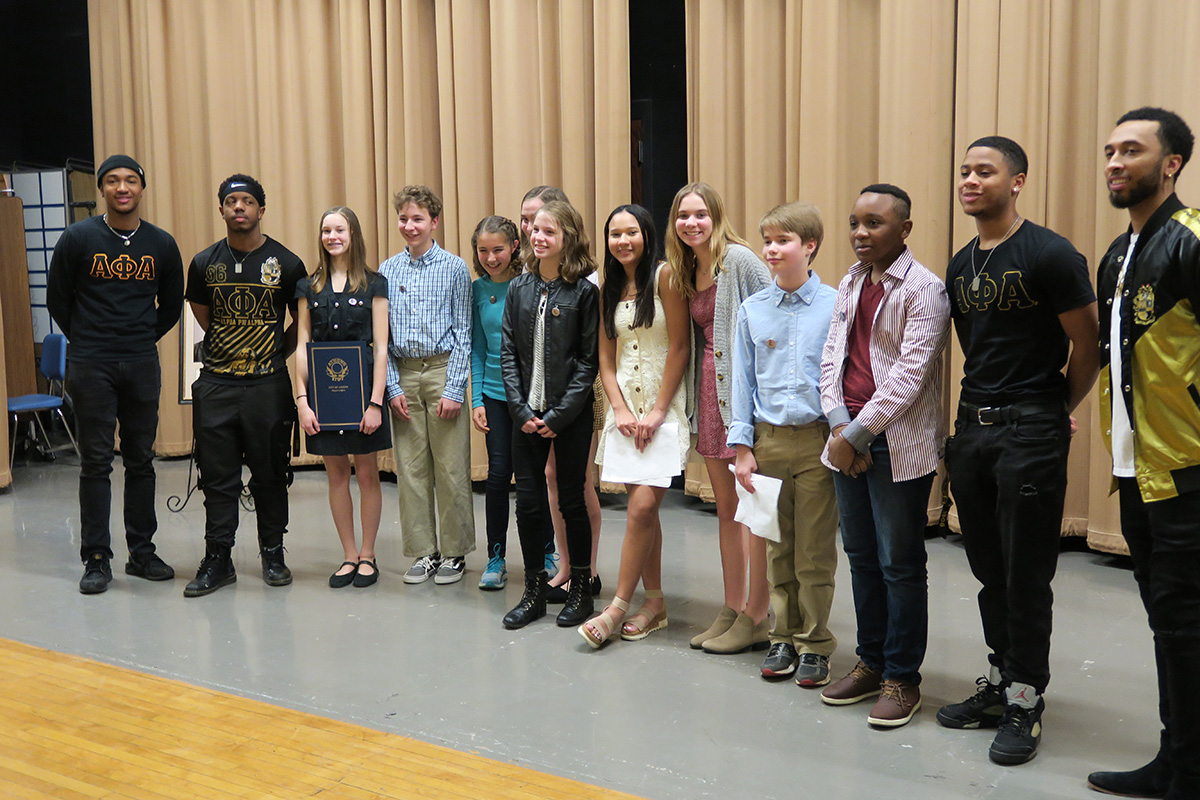 The 10 students, officially known as the Andrew Jackson Davison (AJD) Club, used two events on Tuesday, Feb. 18, to inform the public about the life and accomplishments of Davison, Athens County’s first Black attorney.

Davison’s headshot was omitted from an 1876 composite picture of the current Athens County Bar Association that hangs in the Athens County Courthouse Courtroom A for unknown reasons.

The official Andrew Jackson Davison picture installation in the Athens Courthouse on Wednesday afternoon was the final act of the two-day celebration. Athens County judges George P. McCarthy and Robert W. Stewart participated in the ceremony.

Hall said the students in the AJD Club were chosen because of their keen interest in Black history. She said the project exceeded all of her initial expectations.

“This is the coolest thing I’ve done in 29 years of teaching and I don’t know how I will ever top it,” Hall said. “It started as a project to have Mr. Davison’s picture displayed next to the composite picture of the other attorneys, but that journey seemed inadequate.”

Hall thanked Ohio University faculty and staff for playing a major role in the celebration.

OHIO’s Division of Diversity and Inclusion was one of the events’ three major financial sponsors and D&I leadership also helped coordinate the onstage program and post event reception.

Dr. Winsome Chunnu, director of the OHIO Multicultural Center, said Hall and her students reached out to her and Vice President for Diversity and Inclusion Dr. Gigi Secuban in early January for help in planning the celebration.

“We were delighted to say the least,” Chunnu said. “Since we are programmers by trade, we jumped right in and said that this is what we think we should do. The students and Mrs. Hall liked our ideas.”

Chunnu praised the AJD Club for doing a wonderful job with what she called “a difficult project.”

“It’s impressive that at their age they embarked on this program and didn’t see it as a momentous task,” Chunnu said. “They did an amazing job. For me it was critical to have Mr. Davison’s picture in the Athens County Courthouse. To have it next to the composite picture of his colleagues is significant. He’s an important part of our rich Athens County history.”

"The Division of Diversity and Inclusion’s partnership with Athens Middle School was a natural one because our primary focus is improving the student experience," Secuban said. "Collaborations like this one demonstrate the powerful impact that town and gown relationships can have on the Athens community. To celebrate the life of a local unsung hero who had been overlooked for far too long was especially rewarding. Playing a major role in this amazing project makes Diversity and Inclusion eager and excited to take part in similar future collaborations."

OHIO Associate Professor of Business Jesse Roberson, a former practicing attorney of law, served as the keynote speaker on Tuesday. He spoke about his motivation to practice law and the importance of the community acknowledging Davison’s special place in Athens County history.

“To have done what he did when he did it is incredible,” Roberson said.

Roberson also praised the outstanding work of the AJD Club.

“They are a remarkable group of kids. To pull this together and dig up the factual stuff and write a three-part newspaper article for the local press is really impressive,” he added.

Mayor Patterson talked about the significance of honoring Davison.

“I think it is going to have a big impact, especially honoring someone who was completely forgotten about – which is a travesty,” he said.

After Wednesday’s picture installation in the courthouse, Hall gave one final praise to the AJD Club for working so hard on the project and stressed the importance of Black History Month.

“When we met with Ada Woodson Adams we learned more about local Black history,” Hall said. “We thought ‘why doesn’t our community celebrate our Black history’ and it turned into last night’s event. Hanging Mr. Davison’s picture in the Courthouse today was the final beautiful moment.”