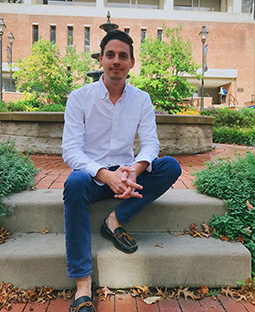 Christopher S. Lewis, Ohio University’s director of the Office of Nationally Competitive Awards (ONCA), was honored with the 2019 Darwin T. Turner Award for his article, "Neuter-Bound/Neuter-Freed: Queer Gender and Resistance to Slavery."

The award is given to the best article of the year published in African American Review, a quarterly publication for scholars who write about and study African American and black diasporic literature, culture and history. Lewis’s article can be found in the journal’s Winter 2019 issue.

The Turner Award’s judges wrote that they "appreciated the [article’s] contribution to a growing body of work on queering the field's readings of American slavery. Here, Lewis does this through queering gender itself as it is performed in Sojourner Truth's work and in sensitive readings that combine feminist, queer, and trans studies."

Lewis said he began writing the article while teaching African American literature at Western Kentucky University. He finished the article after arriving at Ohio University in fall 2018.

“I am very honored and grateful for this recognition,” Lewis said. “Since I first began reading it early on in graduate school, African American Review has greatly shaped my perspective on African American literature and American culture in general. Time and again I've found the work published in African American Review inspiring, challenging, and clarifying when it comes to thinking about race, culture, freedom, and a range of interrelated issues. I feel proud that my work has appeared within it and am humbled by this award.”

The award is named after the late Darwin T. Turner, an African American literature critic, poet, and English professor who wrote and edited dozens of articles, books, academic journals and literary anthologies. During his lifetime, he received the University of Cincinnati’s Distinguished Alumnus Award and was selected in 1977 as a delegate representing the United States at the Second World Festival of Black and American Arts and Culture in Lagos, Nigeria.