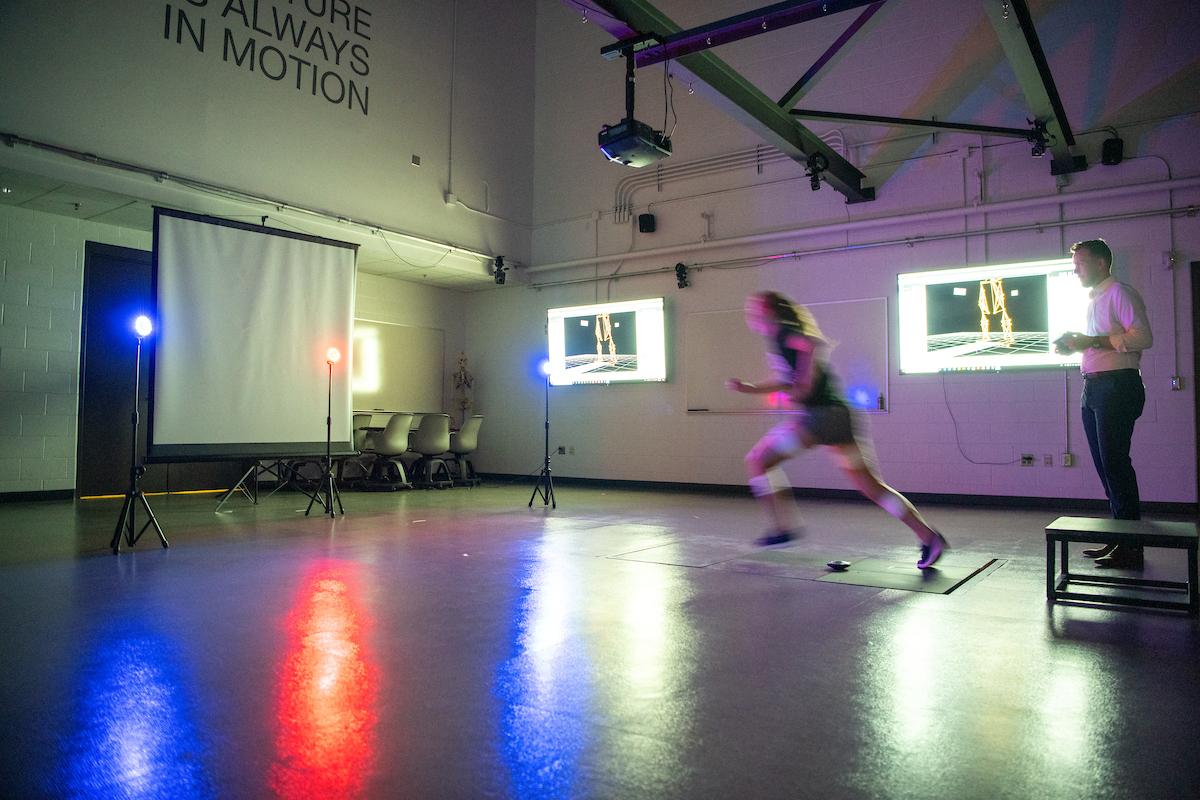 While ACL injury rehabilitation programs often focus on the physical recovery of the knee and the muscle groups around it, research from Ohio University’s College of Health Sciences and Professions indicates the brain also plays a major role in successful returns after an ACL injury.

Dustin Grooms, PhD, associate professor in OHIO’s School of Applied Health Sciences and Wellness, and his team recently completed the first phase of a $750,000 research grant from the United States Department of Defense with the goal of improving the orthopedic healthcare for the war fighter and civilian populations.

Phase II of Grooms’ research project is underway; upon completion of the study, Grooms believes rehabilitation techniques will “drastically” change and its results will benefit many population types.

As a military member, athlete or even weekend warrior, suffering an injury to the anterior cruciate ligament (ACL) can be devastating physically and also mentally. Medical studies have reported that as many as an estimated 200,000 ACL injuries occur annually in the United States; Grooms said about 70 percent of those are non-contact injuries and approximately one-third of them experience reinjury.

“Most of these people had the physical strength to keep their knee in a good position as they ran, cut or jumped — it was their brain that was responsible for the error that led to the rupture,” said Grooms. “When it’s non-contact, your nervous system has likely let you down.”

In the case of military personnel, the modern soldier is often required to carry large amounts of equipment that can affect their center of mass and impact the load on the knees. Grooms said a common knee injury predictor tends to be related to control of upper body center of mass because of the effect it has on the ability to control the torque or rotational movements of the lower extremities.

Phase I of Grooms’ research focused on analyzing established techniques and lessons from orthopedic and sports medicine to develop a tactical performance assessment. Members of OHIO’s ROTC program — mostly from the elite ranger team — performed various movements, including box landings, walking and 180-degree turns with a simulated AR-15 rifle and interactive targeting simulation while being electronically marked and recorded.

The subjects fired simulated shots at a digital screen during cognitive tests while being asked to target certain numbers or colors; they also responded to various auditory cues. Virtual reality tests were also conducted in an effort to introduce disconnects between what an individual’s brain sees and their body feels.

Results from the first phase have been developed into manuscripts that can provide athletic trainers or injury risk screeners who work with the military insight into which soldiers could experience a higher level of injury risk or who simply might need more training or therapy.

“It is very exciting to be a part of this research study as this is one of the first studies to quantify biomechanics, strength, proprioception, and brain imaging during ACL rehabilitation,” said Janet Simon, PhD, assistant professor with AHSW, and co-investigator for the study. “Many studies to date have collected these measures after individuals have returned to their activity so we do not fully understand what is happening during the rehabilitation process. This study will inform future ACL rehabilitation as healthcare professionals will know what to specifically target throughout the rehabilitation process.”

Phase II of the study, which is anticipated to occur over a three-year period, involves the testing of 36 physically active subjects who have suffered an ACL injury and had it surgically repaired.

The study partners with Dr. Sergio Ulloa of OhioHealth to screen and recruit subjects. Grooms said patients who agree to participate in the study will visit Ohio University at various points during their rehabilitation phase to undergo both biomechanical and behavioral testing that includes imaging of the brain.

“We see a shift in the brain imaging data of people with this injury. Their brain unconsciously shifts to use vision more during their rehabilitation and they’re not as efficient with motor performance, especially under high stress,” said Grooms.

Grooms explained that an ACL injury can result in the loss of proprioception, which is the perception or awareness of the position and movement of the body in space.

“The brain then starts using cognitive or thinking resources to control the knee and that can impair your reaction time or ability to interact with the world,” he said. “That can also lead to a greater risk of reinjury.”

Phase II’s behavioral testing ultimately hopes to explain to see how the brain changes over the course of therapy.

“The hope is that if we can identify something that’s changing in the brain over time, we would know when to do an intervention,” Grooms said.

Grooms also noted that data from this study could be used to create clinical trials to help increase a patient’s reliance on proprioception rather than vision during rehabilitation.

“I think four or five years from now, how we train physical therapists, athletic trainers and other professionals and how we implement musculoskeletal therapy will all change,” said Grooms. “It needs drastically improved and, by the conclusion of this project, I believe it will be.”

“Drs. Grooms, Simon, Ulloa and their team are conducting ground-breaking research. This work, which is through a partnership with Holzer’s Department of Radiology, is a great example of the high impact work being done by a large number of the scientists working in our research institute,” said Brian Clark, director of the Ohio Musculoskeletal and Neurological Institute, and co-investigator for the study. “This is clinically significant research as it will have a direct and durable impact on both the treatment and prevention of a common, debilitating musculoskeletal injury.”