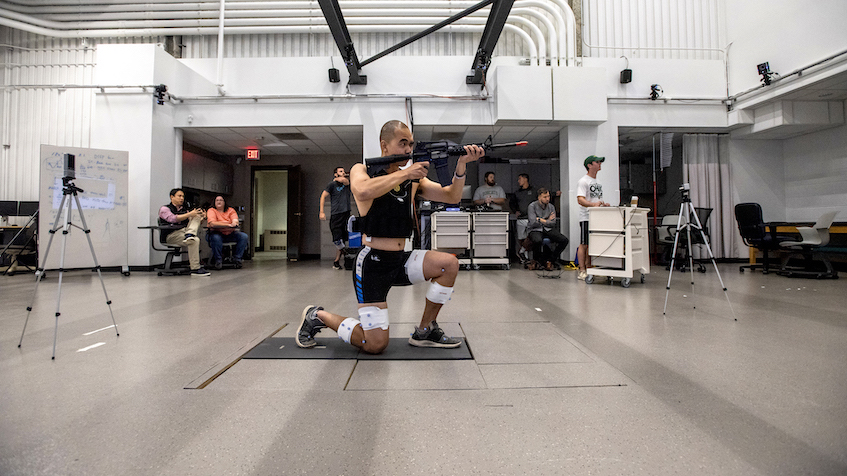 A study proposed to better help military personnel fully recovery from knee injuries has been awarded a research grant of $750,000 from the United States Department of Defense.

Dustin Grooms, an assistant professor of athletic training in Ohio University’s College of Health Sciences and Professions, serves as the lead investigator in the project. He has long studied the changes in the brain after bodily injury and was giving a talk at a sports medicine conference when he was approached by a scientist with the U.S. Army Research Lab who reported an interest in Grooms’ work. Grooms has found that, following an ACL (anterior cruciate ligament) injury, patients suffered impaired performance even after modern surgical reconstruction and physical therapy.

Beginning in September 2019, and over the next three years, Grooms and a team of medical professionals will conduct testing of 30 ACL reconstructive surgery patients between the ages of 18 and 35 and 30 people of similar characteristics who have not had an ACL injury to serve as a control group. Each participant will be studied for a period of six months as the team works to identify potential barriers to successful therapy outcomes and to develop optimal physical therapy treatment strategies.

“For me, the hope is to be able to change the way we do injury rehabilitation altogether,” said Grooms.

Brain scans will be conducted as the team tries to identify how and when the brain changes after injury and over the course of recovery to guide the development of new therapy methods. Tests will include the use of virtual reality and various physical combat simulations of movement, balance and intensity. The tests will be military specific but could have other real-world applications as well, according to Grooms. Additionally, some of the tests and subsequent therapy methods can be performed using a smartphone and a VR viewer which creates a low-cost and accessible method of therapy.

Grooms explained that after surgery and therapy, patients still have a greater chance of reinjury. He said that while a repaired ACL may look strong in a clinical setting, once the patient goes back to military setting, the brain can become overloaded as typical therapy focuses on controlling the knee in isolation. This leads to an overload of the nervous system, a decrease in optimal performance and the increase in potential injury or reinjury. He said similar brain patterns have been discovered after ankle sprains and shoulder injuries.

“Typical rehabilitation today is great at restoring the basics of muscle strength and range of motion, but we are failing to restore all the factors involved in movement coordination and that is what this study is meant to find out,” said Grooms. “In the case of military personnel, this could mean the difference in life and death. This study could really impact the future of medicine.”

i. “The U.S. Army Medical Research Acquisition Activity, 820 Chandler Street, Fort Detrick MD 21702-5014 is the awarding and administering acquisition office” and; ii. “This work was supported by the Office of the Assistant Secretary of Defense for Health Affairs endorsed through the Department of Defense through the FY17 Peer Reviewed Orthopedic Research Program, Applied Research Award under Award No. W81XWH1810707. Opinions, interpretations, conclusions and recommendations are those of the author and are not necessarily endorsed by the Department of Defense. iii. “In conducting research using animals, the investigator(s) adheres to the laws of the United States and regulations of the Department of Agriculture.” iv. “In the conduct of research utilizing recombinant DNA, the investigator adhered to NIH Guidelines for research involving recombinant DNA molecules.” v. “In the conduct of research involving hazardous organisms or toxins, the investigator adhered to the CDC-NIH Guide for Biosafety in Microbiological and Biomedical Laboratories.”