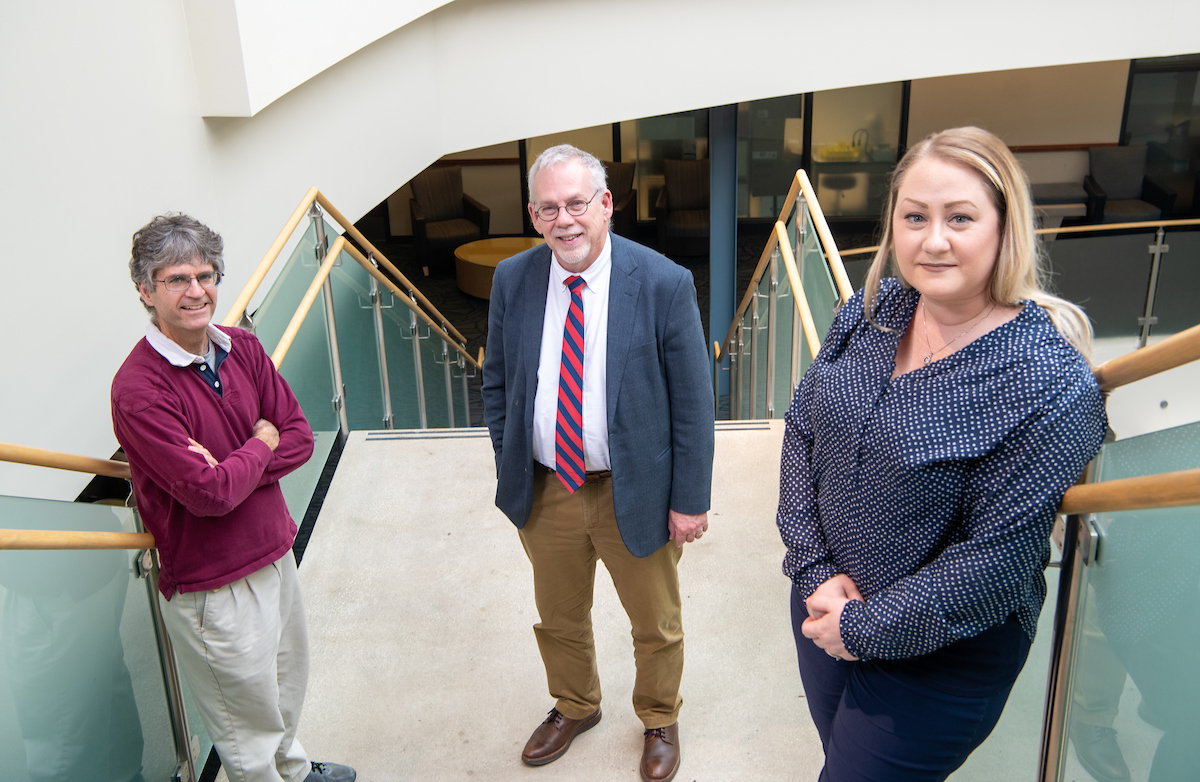 Imagine discovering a compound that has the potential to create therapeutic opportunities for a plethora of diseases. Ohio University professors from three different colleges, along with the support of many students, faculty members and staff, may have just done that.

Their work has been going on more than a decade – they received their first National Institutes of Health (NIH) grant to study and create new compounds in 2009. Then, in 2016, the team, along with Jennifer Hines, professor of chemistry and biochemistry, received another NIH grant to support the work shared in the paper.

It takes years to develop a new therapeutic target into something that can start helping patients, but this is an exciting step, the scientists said.

The aim behind the project in 2009, according to Goetz, was to create more effective compounds than the one they had been working with. Dr. Crina Orac in Bergmeier’s lab then generated many compounds with that in mind, investigating their unique properties in assays.

“We didn’t really know what sort of signals [the compounds] were actually controlling,” Bergmeier said. “I think someone suggested, based on what he had seen, that this is probably a kinase inhibitor. That is when we got looking at the various kinases.”

The human genome has more than 500 kinases. These enzymes play a key role in a variety of cell functions, as they create signals between cells and within cells themselves. When the activity of one of these kinases goes awry, a multitude of health problems can arise.

Although each particular kinase has a unique function, all kinases have similar features making it difficult to devise means to affect the activity of one kinase while not affecting the others. In this case, the team was trying to see if one of their compounds could potentially block, or inhibit, a single kinase in a selective and potent way.

Goetz added, “You want to design a compound that will block one specific kinase but not have an effect on the other ones. That’s hard to do because they are so similar.”

With that in mind, the team sent their compound creations to a private company for screening against an extensive panel of kinases. A compound, COB-187, came back as a selective inhibitor of GSK-3, glycogen synthase kinase-3, which has been linked to a variety of diseases.

It was an eureka moment.

As reviewed in their paper, aberrant activity of GSK-3 has been linked to inflammatory diseases, diabetes, cancer, asthma, neurodegenerative diseases (ex. Alzheimer’s disease) and psychiatric disorders. While the specific applications of the compound must be studied further, the possibilities of what it could do excited the team.

“Then, we find out that for a long time, people have been trying to find these specific GSK-3 inhibitors – and we have one,” McCall said.

Through a variety of molecular and cellular assays, the team tested how the compound interacted with GSK-3, including comparing it to other compounds the team created that are similar to the makeup of COB-187: COB-152 and COB-197.

All three compounds inhibited the two forms of GSK-3, alpha and beta, with COB-187 being the most potent.

This project is a testament to teamwork and collaboration. Goetz, McCall, McMills, Hines and Bergmeier come from three different colleges at OHIO: Russ College of Engineering and Technology, Heritage College of Osteopathic Medicine, and College of Arts and Sciences, respectively.

“We all bring a different perspective of expertise to the table,” McCall said.

COB-187 is just a singular compound the team works on – they have many, many more. The general project has seen more than 25 students, ranging from high school students all the way to doctorate students and postdoctoral fellows, collaborate.

Next steps include figuring out how the compound works, how alterations in its structure affect its activity, and how the signaling mechanism works. The team is also looking forward to further research about the therapeutic potential of COB-187 as a GSK-3 inhibitor.

“There are lots of drugs out there that are used in people that in all likelihood hit multiple kinases,” McCall said. “[The medicines] are still deemed safe enough for their indications that they don’t have side effects, but there are some that do. The more specific you can get, the less non-specific side effects would happen. You’re not hurting a person or blocking another pathway the more specific you are to that kinase.”

Not only does this work showcase a potential new therapeutic opportunity, but also a method for finding more.

“We are focused on the GSK-3 issue right now, but because [COB-187] is such a selective inhibitor of GSK-3 amongst all the other 500, it gives one some insight into how one could potentially target other kinases,” Bergmeier said. “One could take some of what we’ve learned from GSK-3 and all that design to perhaps design something selective for another type of kinase.”

The team is excited about the new possibilities and continued collaboration.

“We’ve been working together for so long, and hopefully we will work together a lot longer,” McCall added.