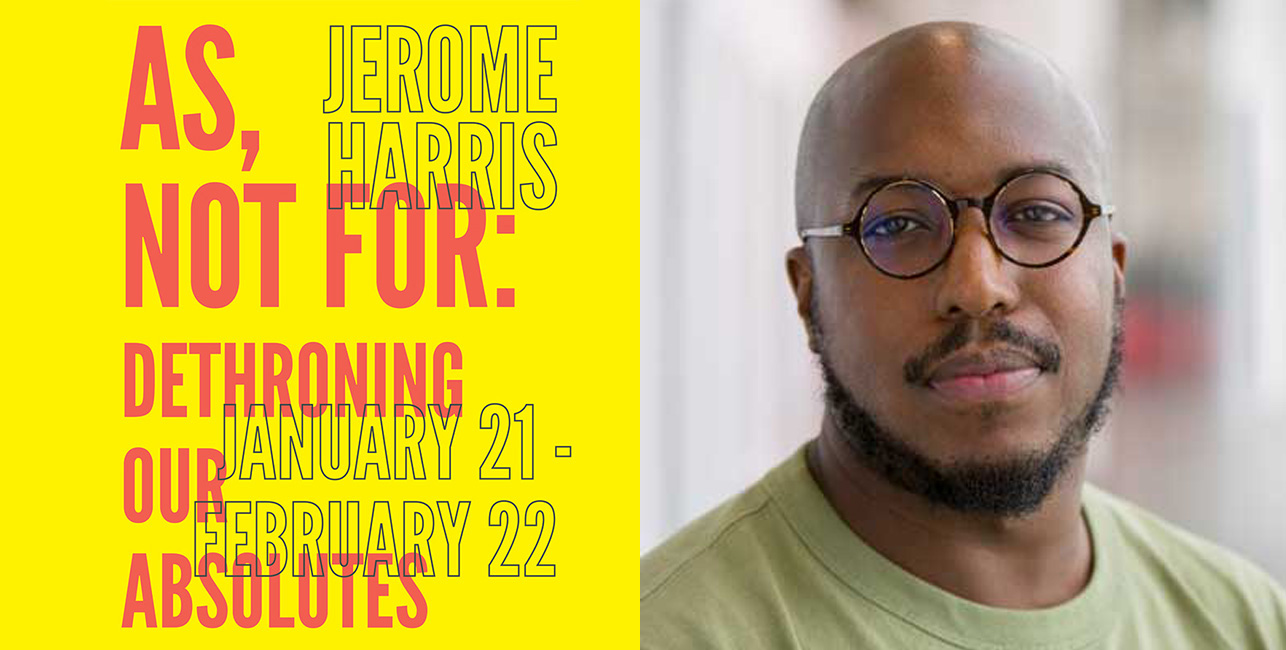 Photo Courtesy of the Artist.

OHIO’s School of Art + Design presents the exhibition, “As, Not For: Dethroning Our Absolutes,” an incomplete historical survey of work created by African American graphic designers over the last century, on view until Feb. 22 in the Ohio University Art Gallery, Seigfred Hall.

The exhibition, curated by Jerome Harris, promotes the inclusion of neglected black designers and their developed methodologies, and challenges the ubiquity of white and anti-black aesthetics in the field of design.

Each work, as a unique representation of black culture from the time it was created, is reproduced for the exhibit and uniformly scaled and printed as a 24’’ x 36” poster, bringing solidarity to the overall presentation.

Taking cues from two perspectives on black artistic production, “Ritual: Baptismal in Black,” a small multidisciplinary exhibition from the 1970s, and Alain Locke's “The New Negro,” a critique of black aesthetics written during the Harlem Renaissance, Harris interrogates the institutional exclusion and historical omission of black graphic design and the implications of that excluded status on black expressive design practice and on graphic design as a whole. The former questions the public's awareness of any black artists in the world, and the latter argues that black citizens should speak from their lived experience to reveal personal truths, rather than generalize for the entire race.

The opening reception for the gallery is Thursday, Jan. 23, from 6 to 8 p.m. in the Ohio University Art Gallery, fifth floor, Seigfred Hall. Curator Jerome Harris, will present a lecture before the reception in Mitchell Auditorium from 5 to 6 p.m.

Throughout the duration of the exhibition, collaborative performances, spoken word, open mic, and film screenings will be curated by M.F.A. performing artists Janai Lashon and Kezia Waters from OHIO’s School of Theater, Thursday evenings, Jan. 30 and Feb. 6, 13, and 20 from 5 to 8 p.m. in the gallery. Visit the gallery’s Facebook page for up-to-date listings.

“As, Not For: Dethroning Our Absolutes,” was curated by Harris and organized at OHIO by Gallery Coordinator Courtney Kessel, with support from OHIO’s Graphic Design program with printing support from the CREATE_space. For images and further information, contact asnotfor@gmail.com or via Instagram, Twitter, and Facebook.

Harris is a graphic designer originally from New Haven, Conn., and is currently based in Brooklyn, New York. He holds an MFA in Graphic Design from Yale University and a BA from Temple University. Harris is the Design Director of Housing Works, a non-profit organization fighting the dual crises of HIV/AIDS and homelessness in New York City. Harris DJs under the moniker DJ Glen Coco and maintains an ongoing choreographic practice that he shares on Instagram at @32counts.

This College of Fine Arts event is made possible through support from Arts for OHIO.