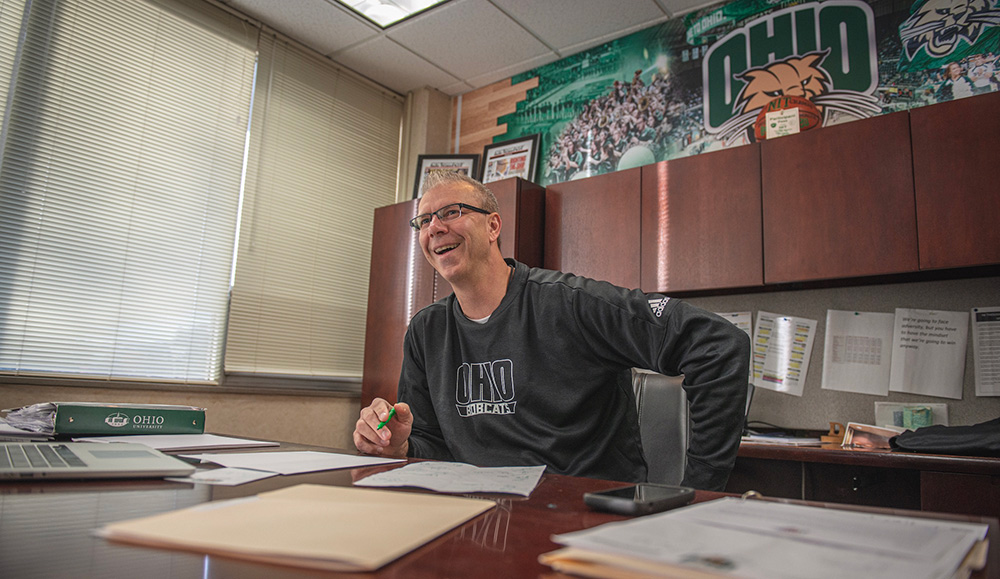 When Ohio University alumnus and former basketball player Jeff Boals was named the 19th head men’s basketball coach in school history on March 17, 2019, it was a dream come true for him.

The 1995 OHIO graduate had spent more than 24 years preparing himself to become head basketball coach at his alma mater. As the Mid-American Conference season begins, OHIO News thought it was a great time to find out more about the Magnolia, Ohio, native.

Read how he completed his journey to return to his home away from home and the school of his dreams, OHIO.

How does it feel to come back to your alma mater?

It's always been my dream to come back to Ohio University ever since I started coaching. I'm just very grateful for this opportunity that Dr. Nellis and Jim Schaus gave me to come back and lead the program.

When did you know you wanted to come back?

It's always been in the back of my mind, but coaching is a difficult profession. I was at Ohio State for seven years and this position opened up a couple of times before, but it didn't work out for me. I loved coaching and living at Stony Brook. We finished last year with a 24-9 record and had the majority of the team coming back, so I wasn't really looking to leave. I had a couple other schools call me but I  wasn't interested. When the opportunity popped up here it piqued my interest and I was fortunate that it worked out. It was a surreal feeling!

How did not getting the OHIO head coaching job the first two times affect you?

Former OHIO Athletic Director Jim Schaus' philosophy was to only hire someone who was a head coach and unfortunately during those times I wasn't. Whether I liked it or not, that was his philosophy. I knew I had to get an opportunity to be a head coach somewhere eventually and thankfully Stony Brook gave it to me.

How did you know it was the right time to come back to OHIO?

A lot of factors go into it. The tough thing about coaching is your family and understanding that it's more than about you. If my wife and kids didn't want to move back to Ohio, we wouldn't have done it. We discussed it as a family and the opportunity to be closer to family and my alma mater made it appealing. After we talked about it we agreed to pursue it and thankfully it worked out.

Why is OHIO special to you?

Number one – it's my alma mater and I have a lot of pride and passion in Ohio University. Another thing that sticks out is the people. Since coming back, I've seen a lot of familiar faces. My former academic advisor Dr. [Bob] Hikida came to my introductory press conference and my former athletic trainer Skip Vosler is always around. The campus is beautiful and has a classic college feel. You look at the current leadership of Dr. Nellis and what Jim Schaus did in his 11 years as athletics director and its impressive. Now we have new athletics director Julie Cromer and I'm excited about her vision and leadership. There’s lots of things that make Ohio University appealing.

When did you know you wanted to be a coach?

Not until the end of my senior year of college. I tell people that I literally fell into coaching. We were 16-4 and I blew out my knee for the third time. I was a biology major and was getting ready to start applying to physical therapy schools after I knew my basketball career was over. My coach Larry Hunter had lost an assistant coach that year and asked me if I would be interested in coaching and without really knowing what it involved, I said yes. Once I got into it, I really enjoyed it. The longer you coach, the more you realize the impact you can have on young men's lives. It's a great profession.

How did your college coach Larry Hunter influence your life and coaching career?

Coach Hunter was a great mentor to me. He impacted my life like he did a lot of people’s lives. After college, I would still run a lot of the big questions by him – buying a house, getting married, jobs, etc. I am forever grateful to him because he got me into coaching. I always tell people that the biggest regret I have in taking this job is him not being here to see it. He was hard and tough in a good way. That's how our teams played and I've taken a lot of the stuff that he did and remembered it.

Did other basketball coaches impact your life and career?

Everyone you work for; you take something from them. When you get your first head coaching job everyone tells you to just be yourself. You can put things in that you've learned from others, but you have to be you.

How did the Stony Brook job help you become a better coach?

It's a lot different being a head coach. You become the CEO and oversee everything. You're dealing with compliance, academics, scheduling and every other facet of the program. Probably the most difficult thing about transitioning from an assistant coach is delegating. You must trust the people you hired and work with. During games everything happens so fast. Timeouts feel like they're 10 seconds and you must figure out how to handle late-game situations. You learn as you go like in any job and you continue to learn as long as you're in the business.

What led you to play at OHIO?

I tore my knee ligaments for the first time right after my senior year. I was 17 and thought my life was over, but I ended up walking on at OHIO my first two years because Coach Larry Hunter gave me an opportunity. I didn't practice or play my first year because of the injury and during my redshirt freshman year, I only played 39 minutes. I wasn't the most athletic guy, so I became a screen setter, rebounder and defender who took charges and that helped me earn a full scholarship for my third year.  It was awesome to receive it after all of the hard work.

How was your relationship with ex-teammate Gary Trent, an NBA first-round pick?

Gary was awesome. Talking about two people from polar opposite upbringings. I didn't know the world in Columbus that he grew up but learned a lot about him just by talking with him. We spent a lot of time together. I always tell people that he probably shouldn't be alive with his upbringing, but to his credit, he became a great father and being in the NBA for nine seasons really polished him as a person. Now, he's a great ambassador for basketball.

What's some of your favorite memories from your OHIO career?

Winning the Mid-American Conference championship by dominating Miami was great. I remember the police escort back to campus and standing on the old Baker Center steps for the victory celebration. Winning the Preseason NIT in Madison Square Garden was another great memory.

Do you stay in touch with your former teammates?

Yes, we still have a text chain today and there are 10 of us who text each other every single day. It’s funny that guys who grew up and are now successful in life with great families still text each other like we're kids. They were so pumped up and elated when I got this job. They have the same type of pride and passion I have about this place and this basketball program. It’s just a great group of guys who have formed a brotherhood.

How is this year's team looking so far?

We had seven available scholarships coming into this year and signed five high school players and a graduate transfer. We're a young team and even the guys who played last year now have different roles. We're in a growth mindset, knowing there will be ups and downs with such a young group. It's a great group to be around and they're locked in to what we're trying to do.

What kinds of players are you looking to recruit?

First, we're looking for high-character guys who can represent our program and the University the right way. Second, we want guys who love the game and want to be pros. The third thing is young men who are serious about earning a college degree. At the end of the day you can have a pro career, but that ball will stop bouncing at some point. Our program's non-negotiables are going to class, having a positive attitude and having a next play mentality to go along with action and effort.

Who are your family members?

My wife, Katie, is chief of staff for the U.S. chief risk officer at Deloitte Consulting. My 16-year-old daughter, Sydney, is an 11th-grade swimmer, and my son, Chase, is an eighth-grade basketball player. My mother and father still live in Magnolia, Ohio. They all go through a lot and sacrifice. My daughter has lived in seven different places during her 16 years.

I'm just excited about the opportunity to coach at Ohio University and where we can take this thing. The journey is a growth process and our goals are to get closer and better as a team every day.