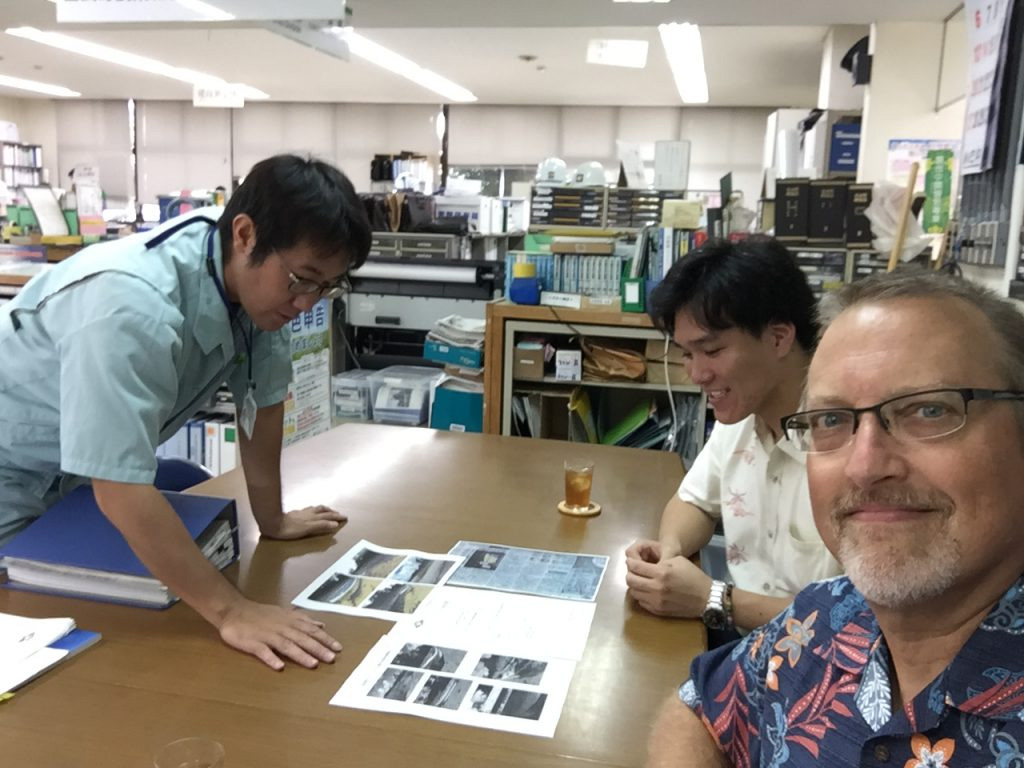 Most recently, he is tied to researching a fishing boat that disappeared during Japan's 2011 tsunami, only to wash ashore seven years later and 1,200 miles away. Nakada and Dr. Christopher Thompson are researching the unusual adventure of the vessel.

Ohio University has a long-standing relationship with Japan's Chubu University, where Nakada, who is from Urasoe, Okinawa, graduated in April 2019 with a degree in English and British-American studies. His main professors were Tomo Yanagi and King, an OHIO alumnus who earned two degrees from the College of Arts and Sciences, a bachelor's degree in linguistics and a master's degree in linguistics.

During his four years at Chubu, Nakada came to OHIO to study English with OPIE, planning to become an English teacher at his alma mater, Urasoe High School. King and Yanagi supervised his student teaching. He now has his teacher certification, with a goal to earn his master’s degree.

From left, Koudai Nakada with a student at School IE at Urasoe Maeda, Okinawa.

Back in 2016, when Nakada studied in OPIE, Thompson was chair of the linguistics department.

Thompson often heard about Nakada’s talents and abilities as a teacher, and his Okinawan background, from King and Yanagi, with whom Thompson has collaborated on a variety of projects. Thompson even hosted Yanagi as a Glidden Visiting Professor of OHIO during the spring of 2017.

Fast forward to the fall of 2018, Nakada was in his final semester at Chubu and looking forward to graduating in April. Thompson was also at Chubu that same semester, serving as OHIO’s Miura Visiting Professor after having completed a nine-year term as chair of linguistics.

At Chubu, Nakada began talking with Thompson about pursuing a master's degree, perhaps in applied linguistics at OHIO, before returning to Urasoe. They also talked about Nakada’s need for research experience.

Coincidentally, Thompson, a cultural anthropologist, was collecting unusual occurrences pertaining to the 2011 tsunami in Iwate Prefecture in northeast Japan, a project related to his long-term work there.

Thompson had heard about a fishing vessel from the Port of Kamaishi on the Iwate coast that had disappeared during the tsunami and seven years later suddenly washed up on the shores of a village in Okinawa, southeast Japan, about 1,200 miles away.

When Nakada returned to Okinawa after graduation, he went searching for and found the fishing vessel from Iwate that Thompson had told him about. It was located in the Port of Kinjō-chō, a 40-minute drive from Urasoe.

Nakada contacted Thompson, who had tracked down the original owner of the vessel in Iwate. Thompson wanted to follow up on the vessel in Kinjō-chō, so he secured research funds from the College of Arts and Sciences at OHIO so he could visit Nakada in Okinawa.

The research trip occurred this past September. At Kinjō-chō, Nakada and Thompson were able to interview local officials about the boat from Iwate. The boat was purchased by a Kinjō-chō fisherman for continued use in the industry.

It’s a tsunami-related account that Thompson plans to publish with Nakada in an academic journal soon.

In the meantime, King was chosen as the 2019 recipient of the Tanaka-OHIO Award, in part for his work with students like Nakada and projects with international colleagues like Thompson. King visited OHIO during International Week, Nov. 17-23, to be honored at the Global Engagement Awards Gala.

King, like Yanagi in 2018, gave a colloquium talk in the Linguistics Department on Nov. 22. The title of his talk was “The Japanese University System and the Challenges of EFL in Japan.”

Before starting his career as a high school English teacher, Nakada would like to earn a master's degree from an American institution.

Currently, he is back in Okinawa, teaching part-time at School IE (Individual Education) at Urasoe Maeda, a school that specializes in preparing students for English exams, as he applies to American graduate schools. He would love to return to OHIO to get his master’s degree.