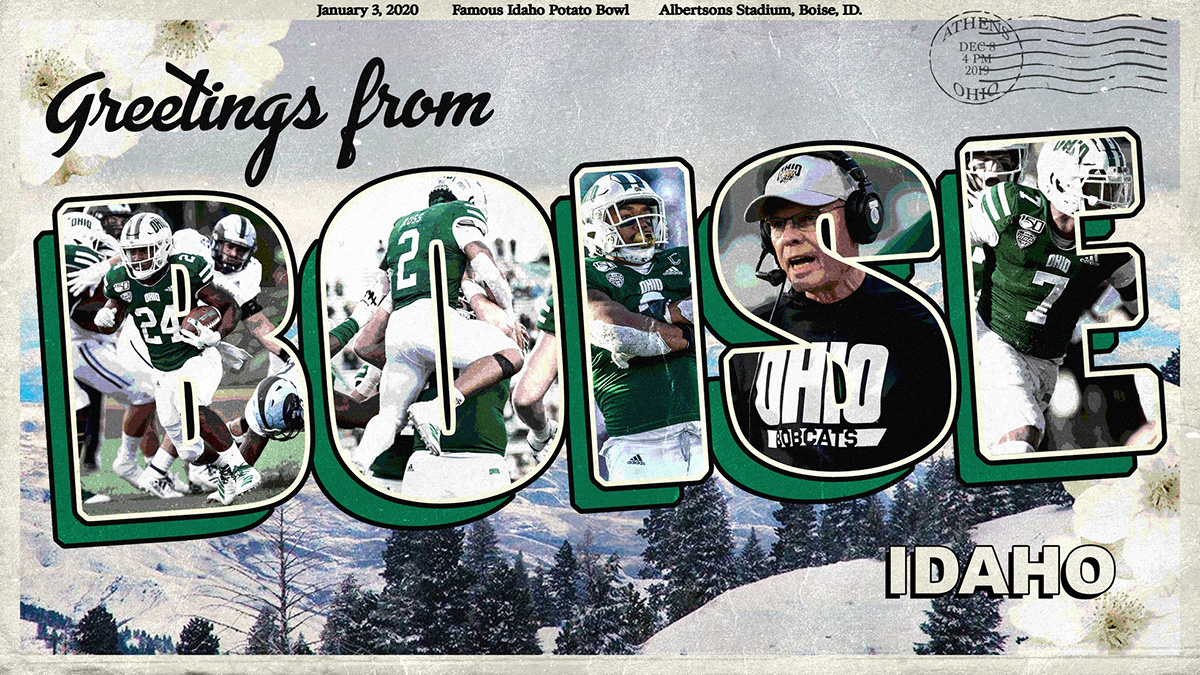 The OHIO football team (6-6, 5-3 Mid-American Conference) has accepted an invitation to play in the 23rd Famous Idaho Potato Bowl against Nevada (7-5, 4-4 Mountain West). The game will be played on Friday, Jan. 3, at Albertsons Stadium in Boise, Idaho. Kickoff is scheduled for 3:30 p.m. ET and will be nationally televised on ESPN.

Ohio's six-win 2019 regular season clinched its 11th-straight year of bowl eligibility, which is the longest current streak in the MAC. The Bobcats posted a winning conference record for the fifth year in a row. Coach Solich, who is the winningest head coach in MAC history with 112 victories.

The Bobcats earned its first-ever bowl victory in the 2011 Famous Idaho Potato Bowl, a 24-23 win over Utah State. The nation's northern-most bowl game traditionally features a Mountain West vs. Mid-American Conference matchup. The MAC has earned a spot in the game nine of the last 10 years. The Famous Idaho Potato Bowl is one of 15 bowl games owned and operated by ESPN Events, a division of ESPN.

"We're excited about getting the invitation to the Famous Idaho Potato Bowl," said 15th-year head coach Frank Solich. "We've been at that bowl before. We were treated great. The people there were amazing. Our guys had a great deal of fun. We were able to combine all that with a win. We have nothing but good memories and are looking forward to being there again."

The Bobcats are making their 13th bowl appearance in program history, 11th in the last 14 years and fifth in a row. Ohio has won four bowl games in its history, posting back-to-back victories twice, and will be going for its third-straight bowl win. Ohio's 13 bowl appearances are tied for the second-most among MAC programs. Ohio's four bowl wins are tied for fourth-most among MAC programs, and a third-straight bowl win would tie Ohio with Toledo (1969-71) and Miami (1973-75) for the most consecutive bowl wins in conference history.

In addition to the 2011 bowl game win, Ohio knocked off Louisiana Monroe, 45-14, in the 2012 Advocare V100 Independence Bowl, rolled to a 41-6 win over Alabama Birmingham in the 2017 Bahamas Bowl and posted a 27-0 shutout of San Diego State in the 2018 DXL Frisco Bowl. The Bobcats are set to battle a team out of the Mountain West in a bowl game for the second year in a row and second time in program history.

The game can also be heard on the radio on the Ohio Sports Network from Learfield IMG College, with "Voice of the Bobcats" Russ Eisenstein and OHIO alumnus Rob Cornelius on the call.