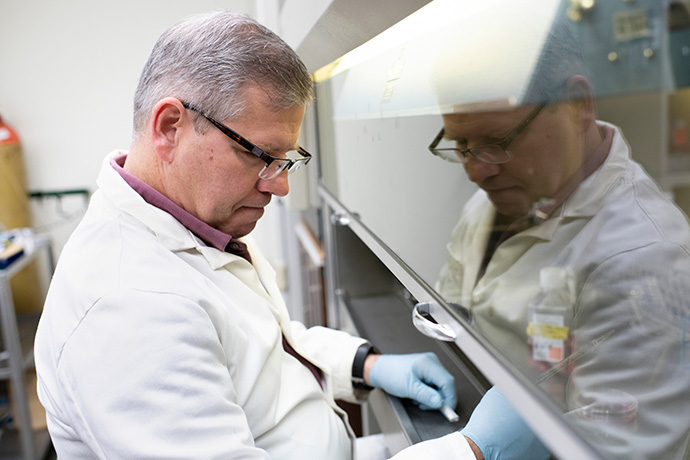 Certain genetic mutations cause cell structures in the ear to break down, leading to deafness. With support from a three-year, $452,998 grant from the National Institutes of Health, researchers led by Mark Berryman, Ph.D., a faculty member at the Ohio University Heritage College of Osteopathic Medicine, aim to learn more about this process at both the genetic and cellular levels.

Deep in the inner ear, microscopic hair cells line a spiral tunnel known as the cochlea. “Hair bundles,” which are set quivering by sound waves, protrude from their surface. Their motion sends electrical signals to the brain; this, in highly simplified form, is how we hear the world around us. Genetic defects that cause breakdown of the hair bundles is one way people – and other animals – can lose hearing.

Berryman describes his NIH-funded project, “Membrane-cytoskeletal attachments in mechanosensory hair cells,” as foundational science work. A better understanding of what happens to the hair bundles in certain types of congenital deafness could mean a better understanding of hearing and how we can lose it. Berryman, a Heritage College associate professor of cell biology, is project director; Ohio University colleagues Soichi Tanda, Ph.D., associate professor of biological sciences, and Mitchell Day, Ph.D., assistant professor of biological sciences, also are part of the project team.

“Hearing loss affects nearly one in five Americans,” noted Ken Johnson, D.O., executive dean of the Heritage College and chief medical affairs officer for Ohio University. “The scientific research pursued by Dr. Berryman and his colleagues helps lay the groundwork for finding ways to avoid or reverse hearing loss, which could improve quality of life for millions of people.”

Viewed with an electron microscope, a hair bundle, whether in a human or one of the mice used in the study, appears as a semi-circular, outward-extending array of narrow pipes like those on a church organ. A ring of tall pipes (called stereocilia) is backed by a row of shorter ones, which is backed by a third row shorter still.

When a sound wave disturbs the fluid in which the hair bundles are submerged, the resulting fluid wave causes each of the tallest row of rigid stereocilia to bend slightly at a narrower, funnel-shaped pivot point near their base, where they are attached to a protein mesh through a membrane. The three rows of pipes are physically linked, so the tall ones’ bending pulls on the shorter ones, causing them to flex as well. This pulling opens a channel through which electrically charged ions flow into the hair cell, producing the signal to the brain. Running inside the length of each stereocilium is a bundle of filaments made of the protein actin.

Each hair cell, including its hair bundle, is enclosed in a membrane. But this membrane, in extending to enclose the bundle, wraps each stereocilium individually, tip to base – Tanda compares it to each finger of a glove covering one finger of the hand. At the base of the stereocilium, in the funnel-like compartment that acts as a pivot point, the inner surface of the membrane is attached by a protein structure to the actin filaments, holding the “glove finger” in place. Berryman and his team are looking at four specific proteins that play a role in this connection: PTPRQ, Rdx, Myo6 and Clic5.

When any of these proteins are in short supply due to a genetic mutation, it may cause the internal connections that hold the membrane to the filaments to let go. This, in turn, lets the membrane detach from around the base of each “finger” and balloon out to surround them all like a tent. Continuing the glove analogy, Tanda explained that in the new configuration, “the fingers are still intact – but wearing a mitten instead of a glove.” This change disrupts the connections, physical and electrical, that let hearing take place.

Berryman’s team has a population of mice with different genetic mutations that reduce expression of three of the four deafness-related proteins. Guided by the geneticist Tanda, they are cross-breeding these mice for different combinations of these genetic protein “knock-outs,” and then testing the hearing of each strain of hybrid mouse to identify differences – to see, for example, if one combination leads to a more rapid onset of hearing loss than another.

“The general idea is that if you see a combination of two genes that causes accelerated hearing loss and also disrupts the structure more rapidly … the implication is that you’re connecting the genetics to the proteins at the protein level,” Berryman said. “And that those two components would be working together in the same biological process in the context of these cells.”

Day computer-tests the mice’s hearing – a painstaking and delicate task in which mice undergo a hearing test similar to that used on a person, with the difference that a mouse can’t raise its hand to indicate it’s hearing a tone. Instead, Day monitors the mouse’s brain activity to identify at what volume and frequency it first begins to hear the tone. Changes in hair bundle structure are also examined visually, using high-resolution electron microscopy.

Berryman said there’s been prior research on hair bundles and the connections that hold them together, but much of it has focused on the connecting links at the tips of the stereocilia, rather than the base portion at which he’s looking. More also needs to be learned about the molecular-level interactions by which the different proteins do their connective work, he said.

“Nailing down how the proteins interact is really kind of the first step and then discovering how these protein interactions are regulated in the cell,” he said. “How the pieces fit together is just slowly being unraveled. And so this region is kind of ripe for study, because we’re almost certain that we have proteins that interact with each other, but it hasn’t been nailed down yet.”