Why did the turtles cross the highway? They didn't, but still might feel the impact 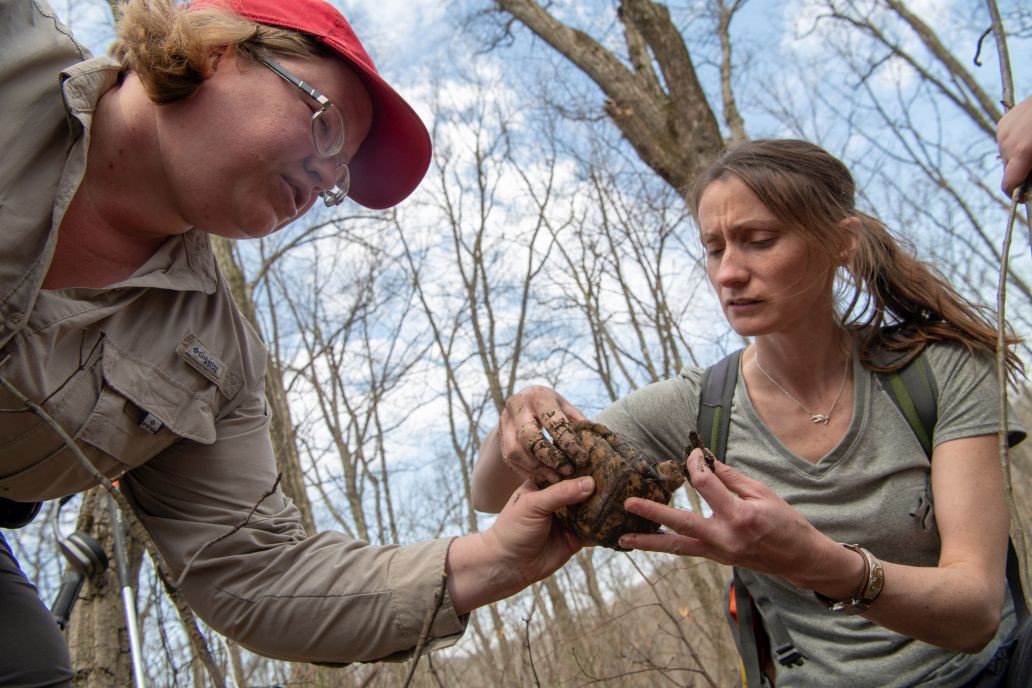 Ohio University researchers set out to determine the impact of the Route 33 bypass through Wayne National Forest on the local box turtle population. The answers were not exactly what they expected.

Roads define the very fabric of our civilization, and very few places in North America remain road-less. As an integral part of the landscape, roads and their vehicle traffic also have unintended consequences for wildlife: many animals die as a result of vehicle strikes, and some strikes pose a risk to human lives. Think about the consequences of hitting a moose, bear or deer on the highway at 70 mph.

These types of events capture a lot of attention, and management agencies work hard to minimize the chance of wildlife-vehicle strikes through mitigation structures such as wildlife fences and overpasses.

However, the effects of roads are not limited to animals dying on roads. Roads may affect the way animals use their habitat. They may bisect important connections between habitats and populations, or they may deter animals altogether and increase their stress levels because of traffic noise, light or vibration.

These types of effects are what former Ohio University Biological Sciences graduate student Marcel Weigand in Dr. Viorel Popescu’s Conservation Ecology Lab sought to investigate and have recently been published in the European Journal of Wildlife Research.

With a passion for reptiles, Weigand asked how new high-traffic roads affect the ecology, behavior and physiology of Eastern Box Turtles, a species of concern in Ohio, threatened by road mortality. Weigand found the perfect study setting, the new Nelsonville Bypass (U.S. 33), cutting through Wayne National Forest, and opened to vehicle traffic in 2013. Several other wildlife studies have been under way in the same location, investigating the success of mitigation structures to reduce road mortality for deer, snakes, and amphibians, so focusing on turtles would paint a more complete picture on the effects of the new highway on road-naïve wildlife.

Weigand also scouted a roadless study site, not far from the Bypass, on the Hocking College and Wayne National Forest lands; this would serve as a control test site, against which any potential effects of the Bypass could be compared.

For two years (2017-18), Weigand, aided by a horde of undergraduate OHIO and Hocking College students, tracked 30 Box Turtles (15 along the Bypass and 15 at the roadless site) via VHF telemetry on a daily basis between March, when turtles come out of hibernation, and October, when they dig down deep for their long winter sleep.

They first captured and collected the turtles with the help of turtle detection dogs, specially trained to sniff out and find the domed critters even under feet-deep leaf litter. After attaching a small transmitter that would provide data on their movements and habitat use, all turtles were treated with a pedicure.

By clipping a couple millimeters of their nails, the OHIO researchers could learn about their stress levels in the previous several months, as the stress hormone corticosterone accumulates in the nail keratin. To evaluate corticosterone levels, Weigand forged a collaboration with Ohio State University avian ecologist and physiologist Dr. Chris Tonra, with his new endocrinology lab offering the equipment and know-how for performing state-of-the-art hormone bioassays.

“Tracking turtles was hard, but fun work. It turns out that turtles liked to hang out (a lot) in fun places like thick patches of greenbrier and multiflora rose,” says Weigand. “Overall, we found that turtles at both roadless and roadside sites used similar habitats, with high volumes of downed woody debris and thick understory, so our initial hypothesis that the bypass was affecting how turtles selected habitat was not validated.”

Adapting to road, but not crossing?

However, the researchers discovered something rather puzzling – while many turtles used the open roadside habitat created by the new highway for thermoregulation and nesting, with several female turtles spending many weeks during summer within a few feet of the pavement, no turtles attempted to cross the road.

“We were confident that we would see crossing attempts, as Box Turtles crossing roads are a common sighting in this part of Ohio. Instead, the new highway acted as a complete barrier to turtle movements; so, in the absence of crossing structures, such as underpasses, the highway has the potential to completely separate the local Box Turtle population," Popescu says. "Interestingly, a four-foot wide culvert underneath the highway was available to Bypass turtles for reaching the other side, but no turtle accessed this mitigation structure. Cutting gene flow may have long-term negative impacts on the viability of turtle populations and decrease their ability to cope with other threats.”

Another unexpected result was the lack of a difference in nail keratin corticosterone concentrations between animals at Bypass and roadless sites. “This came as a surprise, as we expected that the road-naïve population along the Bypass would exhibit higher stress levels due to proximity to the busy highway; corticosterone levels were not higher even in animals that spent weeks in very close proximity to the highway,” adds Weigand. “This result, along with the lack of differences in habitat use and home range sizes, show that Box Turtles have the capacity to rapidly adapt to new habitat conditions.”

Weigand’s study also offered the opportunity for many OHIO and Hocking College undergraduates to learn new field skills, such as VHF telemetry, habitat sampling and field data collection, GPS orientation and much more. Ryan Wagner, a wildlife and conservation major supported by OHIO‘s Program to Aid Career Exploration (PACE), was Wiegand’s sidekick throughout the study.

“This was my first exposure to wildlife field research, and it gripped me. I love reptiles, and having the opportunity to participate in all aspects of this study, from capturing, tagging and tracking turtles, to stress hormone lab work, data analysis and manuscript writing, set the stage for my next career move, graduate school,” Wagner said. Besides being an enthusiastic researcher, Wagner is also an accomplished photographer, and his photo of a Garter Snake was selected for the 2018 Ohio Wildlife Legacy Stamp among hundreds of submissions.

Overall, this study opens many other questions about the long-term impacts of barriers on the genetic makeup of turtle populations, their physiology, as well as their population viability. It suggests wildlife management techniques that could make certain areas more attractive to turtle populations without putting them at risk of exposure to roads. It also highlights the importance of designing and implementing the types of road mitigation structures that maintain population connectivity. “This research is a prime example of collaboration between academia, Wayne National Forest, Ohio Department of Transportation and local environmental groups (Rural Action).

“My hope is that our work will provide transportation and wildlife management agencies additional knowledge and tools to ensure that the anthropogenic march of progress does not rest on the backs of turtles,” Weigand said.