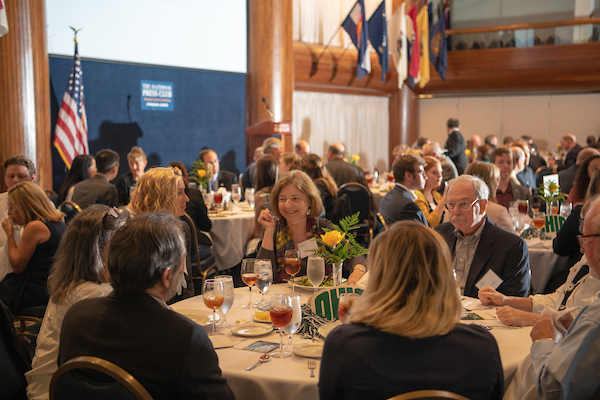 The event, hosted by Ohio University President M. Duane Nellis, celebrates alumni involved in service to the federal government or engaged in civic debate of federal public policy. The luncheon gathers alumni in the D.C. area to connect and forge relationships.

Klein was chosen for this year’s award for his extensive contributions to the public sector, his significant achievements in his profession, and his stellar service to Ohio University in elevating its national profile.

In introducing Klein, Nellis invoked another OHIO alumnus: Sen. George Voinovich, namesake of the Voinovich School of Leadership and Public Affairs, who also dedicated much of his life to public-private partnerships and service.

“The Voinovich School is truly inspiring a more positive economic and quality of life future for not only southeastern Ohio, but Ohio in general,” President Nellis told the audience. “I’m sure George Voinovich would have joined us in honoring Ken for his work in forging award-winning public-private collaborations.”

Klein graduated from Ohio University in 1976 with a bachelor’s degree in journalism. He worked for the Associated Press and the Florida Department of Transportation for several years before joining Bob Graham’s U.S. Senate campaign as press secretary. Klein continued to work for Graham in the Senate in various capacities for 12 years, as well as the Democratic Senatorial Campaign Committee, until he joined the Out of Home Advertising Association in 2001.

Klein’s primary job is to represent the industry’s interests before Congress. But he also uses media and advertising strategies to promote environmental, public safety, and law enforcement issues. For example: When Denis Hayes, organizer of the first Earth Day, asked Klein to help promote the 2019 observation, Klein came through with ad space nationwide featuring endangered animals and the #ProtectOurSpecies hashtag.

When introducing Klein, President Nellis commented on his tireless work to help promote Ohio University students and alumni on advertisements throughout the East Coast and Midwest.

“Even if you don’t know Ken, you’ve likely seen his work,” Nellis said.

In his speech, Klein shared personal anecdotes of his hometown and his time as an undergraduate at Ohio University, where he met his wife, Susan.

Klein emphasized the importance of getting a university on the map and building its reputation. As he has increased his involvement with OHIO, he said he has been continually impressed without fail by the success of the students, faculty and alumni.

“We have a shared interest to tell each other, tell The Post, tell Congress, tell the world about us,” Klein said in reference to Ohio University.

Klein ended his speech by showing a video of an OHIO student who had served an internship in Washington, D.C. He looked out to the audience a final time, thanking them for allowing him the opportunity to meet such special people and hear their stories.

“We are special. We have special stories to tell. Let’s tell the world,” Klein said.