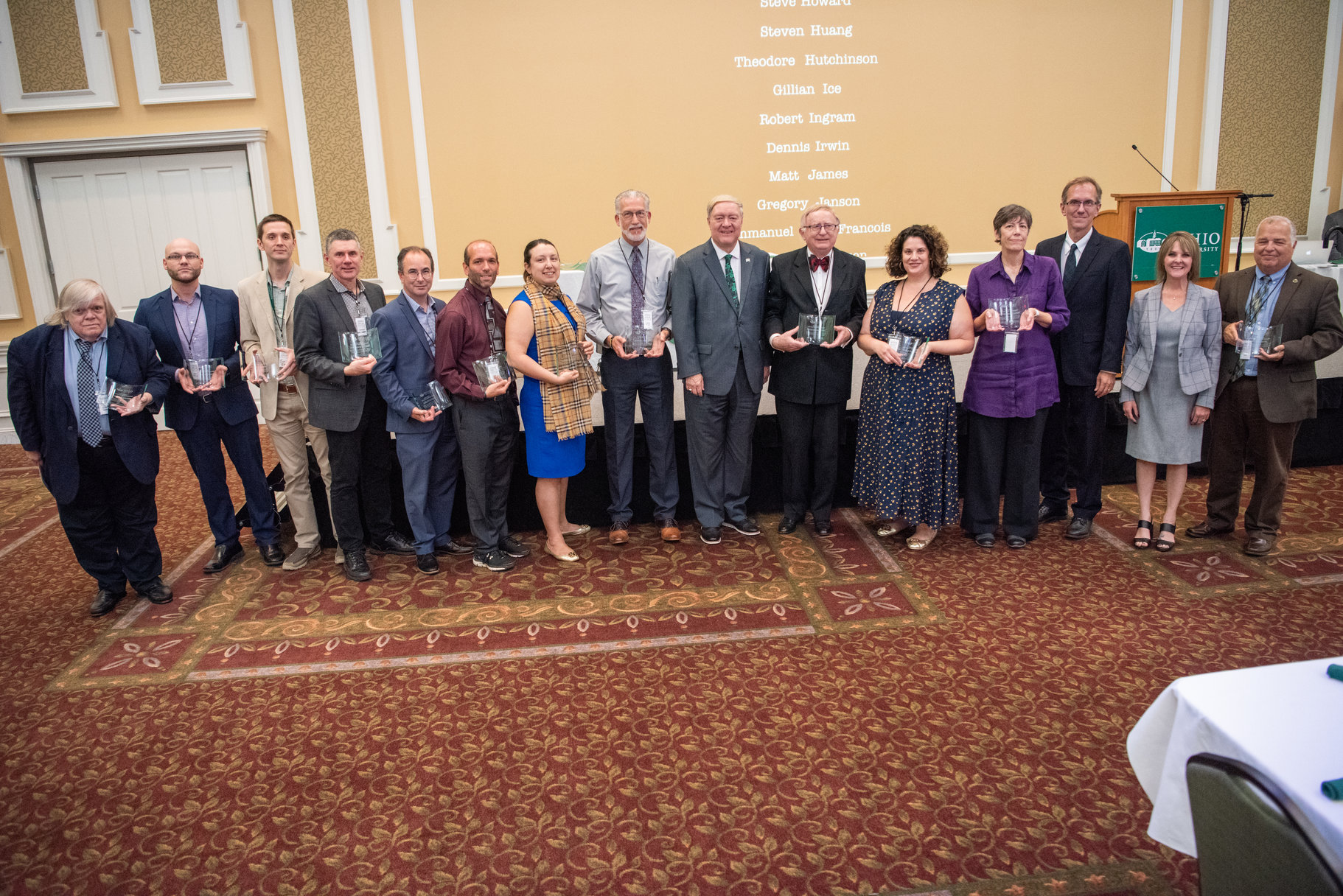 Members of the Ohio University community gathered Oct. 3 to celebrate the hundreds of OHIO faculty who promote the research, expertise and overall excellence of the University through being mentioned in the media.

University Communications and Marketing (UCM), in partnership with the Office of the Executive Vice President and Provost, hosted the fifth-annual Faculty Newsmakers Gala in the Baker University Center Ballroom. Created as a means of honoring faculty who elevate the University and raise its national and global profile through media coverage of their work and expertise, this year’s gala celebrated 356 OHIO faculty newsmakers who made headlines in 2018.

“Every mention of an Ohio University expert in the news has a direct impact on elevating our reputation,” said Carly Leatherwood, senior director of communication services at UCM who was one of the speakers at the event. “Our celebration this evening is our way of expressing gratitude to you and to every person who plays a role in promoting the great work that happens here.”

UCM and marketing and communications offices throughout the University partner with faculty members and researchers who are committed to sharing OHIO’s stories by engaging with media around the country and all over the world. At UCM, those individuals are known as “OHIO faculty newsmakers” and are defined as employees who, regardless of their title or classification, teach at Ohio University and have been included in media placements provided by Cision, a monitoring service used by UCM to track the University’s media placements. Faculty newsmakers may include tenured and non-tenured faculty, as well as administrators who serve as educators in OHIO’s classrooms.

Many of OHIO’s faculty newsmakers take part in Ohio University’s Experts Directory, a searchable database that makes it easy for members of the media to find and connect with Ohio University’s expert sources on a broad range of subjects.

Representing 10 academic units on the Athens Campus and all five of the University’s regional campuses, this year’s 356 faculty newsmakers were featured in 2,246 media reports and more than 1,000 news outlets during the 2018 calendar year.

This year’s event marked the third time Ohio University President M. Duane Nellis attended the event. He congratulated and honored the faculty not only for their expertise but for their top-notch research efforts and innovative ways of preparing students for the world.

“Today we are not just celebrating your quotes in the media, but the overall expertise you bring to your respective fields, and more importantly to your students,” said Nellis. “It’s your dedication to improving our community and world through your vast knowledge in your area of study. The media attention means that you’ve been noticed and sought out for that academic expertise and dedication.”

Joining President Nellis was Ohio University Vice President for Research and Creativity Dr. Joseph Shields, who had the honor of presenting special recognition awards to 18 OHIO faculty newsmakers – the top 10 newsmakers of 2018 who earned the most media placements, as well as those who were quoted in media reports related to the Associated Press’ Top Stories of 2018.

“Our faculty members, 356 of you to be exact, represented Ohio University, showing that we not only provide a world-class education for our students, but we are at the forefront of advancing knowledge, culture, and civic engagement; and we demonstrate our commitment through our actions every day,” said Shields.

The following OHIO faculty newsmakers were presented Keystroke Catalyst Awards for having the highest number of media placements in 2018:

A professor of anatomy and Chang Ying-Chien Professor of Paleontology, Witmer is an OHIO Presidential Scholar who is known all over the world for his dinosaur research and discoveries. He is frequently called upon to provide his expertise and explanations to shows on a variety of television networks and countless print publications and journals.

The majority of Witmer’s 2018 media placements were related to a study he co-authored about dinosaurs’ nasal passages being of an unusual structure to help keep their heads cool. According to his study, the dinosaurs’ nasal passages don’t fork off a central channel like other backboned creatures; instead they have a single airway that repeatedly twists and turns like roller coaster tracks.

The vessels carrying blood from the dinosaur’s body to its head ran alongside its long nasal canal, so every time the dinosaur inhaled, cool air would have meandered through that twisty airway, absorbing the heat from the adjacent blood and cooling it before it hit the brain.

“I’m proud to be OHIO’s top newsmaker this year,” Witmer said. “A major goal of our research team is to share our scientific results widely, and the popularity of dinosaurs gives us a chance reach a broad audience. The idea is that folks come for the cool dinosaurs but leave with a little more knowledge of the natural world…and hopefully, more excitement about the wonders of science!”

The following OHIO faculty newsmakers were presented Keystroke Catalyst Awards for being quoted in media reports related to the Associated Press’ Top 10 Stories of 2018: