Ohio University named one of the best places in the U.S. to see Cherry Blossom trees by National Geographic 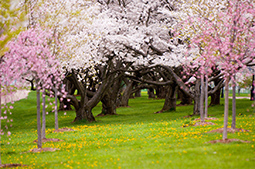 The Cherry Blossom trees, a gift from Chubu University in Japan, are in full bloom along the bike path.

Ohio University was recently named one of the best locations in the United States to see Cherry Blossom trees according to National Geographic. The 217 cherry trees that line the bike path along the Hocking River were living gifts from OHIO’s sister institution, Chubu University in Japan.

“To be recognized as one of the best places to see Cherry Blossoms alongside major cities known for these trees and the festivals that celebrate them is such an honor,” said President Nellis. “Not only is this telling of the beauty that surrounds OHIO’s campus, but pays homage to our partnership with Chubu University and the way we observe Japanese culture.”

Each year, the Japanese Student Association hosts a Sakura Festival in conjunction with when the trees bloom; typically late March to mid-April. The festival showcases not only the trees, which are illuminated during the night all throughout their blooms, but Japanese culture as a whole with traditional food, dancing and performances. It also signals the New Year, which begins in April in Japan.

Since then, OHIO Grounds Services adds to the grove every year in a cycle of tree loss and replacement. This pattern of continual replacement preserves a healthy stand as opposed to having a group of trees that are all the same age and could decline at the same time.