OHIO administrators to share 'The Future History of The Ridges' on Nov. 15 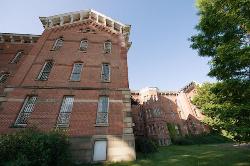 Photographer: Ben Siegel, Ohio UniversityUniversity administrators and Ridges Master Plan co-chairs Shawna Bolin and Joe Shields will present “The Future History of The Ridges” at 6 p.m. on Thursday, Nov. 15 at the Southeast Ohio History Center. The event is free and open to the public.

University administrators and Ridges Master Plan co-chairs Shawna Bolin and Joe Shields will present “The Future History of The Ridges” at 6 p.m. on Thursday, Nov. 15 at the Southeast Ohio History Center (SEOHC). The event is free and open to the public.

The presentation will serve as the sixth and final portion of the SEOHC’s speaker series surrounding the 150th anniversary of the Athens Asylum.

Guest speakers who participated in the series also included architect Robert Kirkbride, a descendent of Philadelphia physician Thomas Kirkbride, whose designs for mental asylums were used to build the Athens Asylum; Katherine Ziff, Ohio alumna and author of The Asylum on the Hill; former Athens Asylum employee George Eberts; director of the SEOHC Tom O’Grady; and author Mindy McGinnis, who utilized the Athens Asylum as the setting for her novel, A Madness So Discreet.

Honoring the Asylum’s past and looking to The Ridges’ future

For Bolin, Shields and Ohio University, this month’s speaker series appearance provides the opportunity to not only pay homage to the rich history of the Athens Asylum, but to share insight into key pivotal moments of the Asylum’s history that both shaped the property’s current character and set the stage for its next 150 years.

“In the early 1800’s, a community came together to advocate and fundraise for the asylum that was ultimately located in Athens; over the years, this same community has cherished, enjoyed, advocated and re-imagined the facilities and grounds that we celebrate today,” said Associate Vice President of University Planning Shawna Bolin. “As we look to the future of The Ridges, it’s clear that the same community passion and advocacy will remain essential to our ability to appreciate and benefit from this historic area during the next 150 years.”

In addition to the 2018 Athens Asylum speaker series, the SEOHC, in collaboration with Asylum on the Hill author Katherine Ziff, is hosting an exhibit displaying numerous Asylum-related photographs, documents and artifacts at the History Center. The exhibit will remain on display through December 2018.

According to the SEOHC, visitors to the exhibit will experience “what it was like not only for patients who inhabited the buildings, but also the staff, medical teams, physicians and the many others who kept the institution running for 150 years.”

Collaborations have provided the key to renovation, revitalization at The Ridges

Ohio University is proud of the collaborative Athens Asylum restoration and revitalization efforts that have taken place since the property, now referred to as The Ridges, was transferred to Ohio University more than two decades ago. Continued collaborations with members of the community will forever be central to achieving innovative solutions related to the future uses of the cherished Ridges property.

Many recent accomplishments and milestones* have shaped the University’s collaborations and investments at The Ridges, including:

*Note: Additional stabilization and improvement projects that have occurred at The Ridges are available on page 7 of The Ridges Framework Plan.