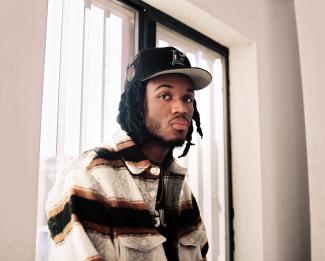 Saba began making music at age 8 and was writing and producing songs by early adolescence. Building a recording studio in his Grandmother’s basement on the Westside of Chicago, he and a group of neighborhood friends formed Pivot Gang and began taking trains across the city to join creative youth organizations and perform at open mics. These experiences sharpened his writing and performance skills for his now career that’s taken him to perform 100+ shows worldwide.

A successful black independent artist, Saba has rooted his career in an authenticity and musicality that’s made him one of this generation’s most important and unique voices.

Saba’s critically-acclaimed 2018 album CARE FOR ME was named NPR’s #1 Hip-Hop Album of the Year and earned him honors as one of the Chicago Tribune’s Chicagoans of the Year.

In 2019, J. Cole tapped Saba for his Revenge of the Dreamers III project, where they featured together on the powerful closer “Sacrifices” - the track recently attaining RIAA certified Gold status. He also teamed up with frequent collaborators Noname and Smino to form the Midwest music collective Ghetto Sage.

In early 2022, Saba released his 3rd studio album, Few Good Things, which marks another seamless project offering from the Chicago artist. The album campaign successfully tied in themes of generational dialogue, reflection, community and ownership, with an emphasis on Black ownership. What sets this release apart is its ability to incorporate these themes and highlight them not only within the music itself, but through thoughtful marketing, stunning visuals, and complex messaging. Saba has always put the art first and this rollout is a reflection of that. Between the Few Good Things Short Film [youtube.com], the Saba-curated Preme Magazine [preme.xyz] Issue and the Supervsn Merch Capsule [supervsn.com], the Few Good Things campaign includes aspects of film, art and fashion that ultimately tie back to the meaning of the music itself: to hold close the things that matter most to you.

Incorporating Black owned companies, independent creators, and filmmakers into album content, working alongside family and friends to produce artwork and assets all while reinforcing the values that mean the most to him. As he mentions in his penned letter to fans ahead of release, "Our culture is not clickbait". The integrity of the music and culture has stood at the forefront throughout this campaign. Saba is the epitome of artist independence and ownership and this album rollout celebrates that.