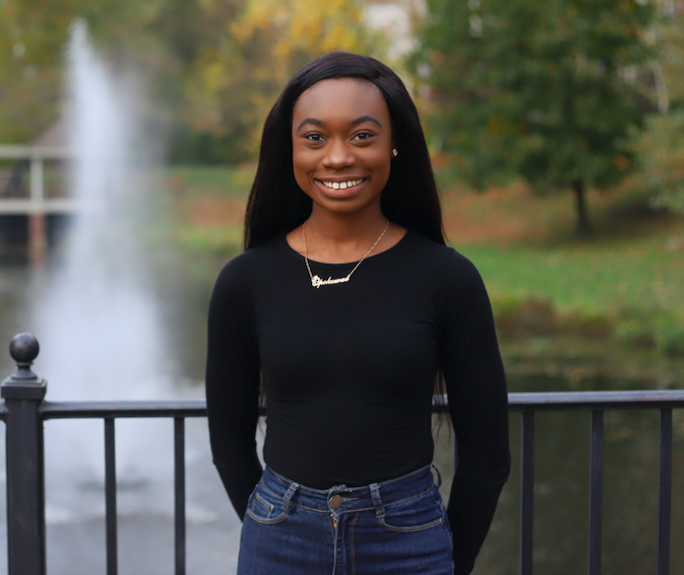 Jennifer writes “Coming from a Ghanaian background, I have always embraced my diversity, and it made me open to embracing the diversity of others, thus my love for studying Spanish and all things Latin America. Through the generosity of the Benjamin A. Gilman International Scholarship (as well as scholarships through the Global Office of Opportunities) I was recently able to study abroad in Toledo, Spain. During my time in Toledo, I worked with kids from ages 3-12, and I educated them about my life as a Ghanaian American student and encouraged them to follow whatever dreams that they have, as I did the same. It is an honor to receive the Blackburn / Spencer Achievement Award!”

Amal Shimir is a MA candidate in International Development Studies at Ohio University. Amal is the current Graduate Student Senate (GSS) Vice President, and she is also the President of Ohio University Fulbright Scholars Association. She is from Iraq where she has worked for many international organizations like International Rescue Committee and International Committee of the Red Cross as a humanitarian worker.  Amal concentrates on development and conflict. She plans to focus her study on disarmament, demobilization and reintegration of armed groups and militias in Iraq in post conflict and the challenges of DDR in Iraq when it comes to pro-government militias . In her free time, she enjoys reading and traveling.

Linda Konadu Tuah is a second-year MA candidate in International Development Studies at OU from Ghana. Linda is the current College Senator for the Center for International Studies. Her area of research is on the works and lives of female African migrant workers in the Homecare industry and how they contribute to the economic development of countries they find themselves in as well as their home countries. In this sense, she focuses on remittances and how that helps in the economic development of migrants’ home countries. She is passionate about advocating for the less privileged in communities or societies by helping them to be appreciated and seen as valuable members of their communities so that they are not excluded or left behind.

Daniela Avila is a second year MA candidate in Latin American Studies at OU and works for the Infectious and Tropical Disease Institute at Ohio University. She is the current Department Representative for the Latin American Studies Program for the GSS. As part of her activities within the GSS she also represents graduate students in the University International Council (UIC) at OU. She was born and raised in Quito, Ecuador, one of the smallest yet most diverse countries in South America. She acquired a Bachelor's degree in International Relations and International Business from the Pontifical Catholic University of Ecuador. She has a keen interest in Women, Gender, and Development Studies and is currently conducting her research on the Amazonian Women Fights for Environment in Ecuador.

George is a second-year MA candidate pursing African Studies at OU. George is the current African Studies Department Representative for the Graduate Student Senator. He is from Anyinam in the Eastern Region of Ghana. He holds a Bachelor's degree in History from the Kwame Nkurumah University of Science & Technology. His research interest lie in the area of environment and colonialism, and democratization in Africa. In his free time, he enjoys playing soccer.

Laureen Owaga is a second-year MA Candidate in International Development Studies (IDS) from Kenya. Laureen is the current International Development Studies Department Representative at the Graduate Student Senate and has interests in diversity and social justice. Her area of focus is in Gender and Development, and her research area is in Gender inequality and Gender-Based Violence, specifically investigating the challenges of domesticating Gender-Based Violence policies' implementations in Kenya.

Commey receives the Richard A. Horovitz Fund for Professional Development

Jeremiah Commey, a second-year  MA student in African Studies from Ghana, has been awarded the Richard A. Horovitz Fund for Professional Development. He aspires to work with universities and international non-governmental organizations seeking to undertake developmental projects with the aim of imparting his knowledge and experience to improving the lives of the younger generation.

The Horovitz Fund is dedicated to African artists and scholars in the humanities and social sciences and is awarded to graduate students with a demonstrated academic achievement. The fund was established in memory of Richard Horovitz, a Ford Foundation program officer who died in 1991.

His main area of research is development within the cultural perspective in Africa. The inspiration and passion for his career path has been a result of his experience as a Teaching/Research Assistant at the Modern Languages Center at the University of Ghana following the completion of his first degree in Political Science and Swahili. He intends to give back to his country and community through research and teaching after the completion of a doctoral degree. His goal is to acquire new approaches and interdisciplinary techniques–appropriate for the study of the Black experience; historical, cultural, African Diaspora studies, and contemporary socio-economic and political issues, and effectively apply them upon his return to Ghana.