Barr-Melej Publishes Essay on Chile and the ‘Global 1968’ 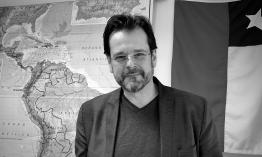 In his newly published essay, “A ’68 chileno? Politics, Culture, and the Zeitgeist of ’68,” Dr. Patrick Barr-Melej, Professor of History and Interim Executive Director of the Center for International Studies, explores 1968 in Chile as part of an edited volume of essays titled Global 1968: Cultural Revolutions in Europe and Latin America (University of Notre Dame Press, 2021). The collection, edited by James McAdams (Notre Dame) and Anthony Monta (Holy Cross College), features contributions by distinguished historians, filmmakers, musicologists, literary scholars, and novelists.

From Mexico City to Paris and beyond, 1968 saw massive protests, political violence, the assertion of new values, and explosions of artistic expression that together challenged dominant structures, ideologies, and sensibilities amid the Cold War.

For Barr-Melej, the political, social, and cultural history of Chile during Latin America’s “long 1960s” (1959–73), bookended by the Cuban Revolution and the military coup that ended Marxist president Salvador Allende’s “Chilean road to socialism,” provides an insightful point of access into the zeitgeist—or spirit— of ’68 and the ’68 phenomenon generally. Whereas certain actors and events in Chile reflected the reach of and contributed to the zeitgeist of ’68, Barr-Melej maintains that many of the essential factors of what transformed 1968 into ’68 transnationally were played out differently there, were of a lesser magnitude, or simply did not unfold.

To illustrate, Barr-Melej looks at a university reform movement in 1967–68 that realized its immediate goals under a centrist government—circumstances that were quite alien to student protesters in Mexico City or Paris. And although 1968 saw bouts of unrest and conflict in the streets of Santiago, often with radical youths pitted against police, such eruptions were small and brief, did not significantly impede the rhythms of life in the capital or elsewhere, and largely were outcroppings of ongoing debates and legislative struggles between political parties and blocs, he argues.

Barr-Melej notes that a vital factor shaping Chile’s ’68 experience was the absence of a profound and perilous (or promising, depending on one’s position) sense of impasse, which was a complex, contributing factor leading to 1968’s explosiveness in Paris, Mexico City, and other contexts. This was the case in Chile notwithstanding deep frustration voiced by workers, various student and youth groups, and other constituencies, especially on the more radical (and radicalizing) Left, regarding systemic elements of the country’s political culture and socioeconomic architecture.

“With democratic and pluralistic qualities framing an electoral environment in which leftist political parties had participated earnestly for many decades, Chile’s pre-1973 political culture afforded space, though highly contested space, for the rise and development of radical politics, including that of young people,” Barr-Melej explained.

“Since the 1920s, political democratization was interrupted in just a few instances, like the banning of the Communist Party from the late ‘40s to the late ‘50s. Broadly speaking, Chile’s political culture since the 1930s essentially had provided a mechanism—a pressure valve, let’s say—that channeled postwar revolutionary energies into mainstream politics, and this was true until the early 1970s. We don’t see this in France or Mexico on the eve of ’68, for example.”

The essay is partially connected to Barr-Melej’s most recent book, Psychedelic Chile: Youth, Counterculture, and Politics on the Road to Socialism and Dictatorship (University of North Carolina Press, 2017), which has drawn considerable attention and acclaim in Chile. In 2017, Psychedelic Chile was named a “Book to Highlight” by the high-circulation Santiago newspaper La Tercera.

Barr-Melej received his PhD in History from the University of California at Berkeley and teaches courses on Latin American history, world history, and historiography. He is the author of two books and numerous articles and essays on Chilean history and has given invited talks at institutions around the world. Barr-Melej also evaluates grant proposals for the government of Chile and serves on the editorial committees of Chilean academic journals.

Dr. Patrick Barr-Melej, Professor of History and Interim Executive Director of the Center for International Studies, was interviewed by the Chilean music magazine Rockaxis for a recent special edition on rock music and Chilean musical icon Víctor Jara.

Dr. Patrick Barr-Melej, Professor of History and Interim Executive Director of the Center for International Studies, was interviewed by the Chilean music magazine Rockaxis for a recent special edition on rock music and Chilean musical icon Víctor Jara.

Jara, who was murdered by the emergent military regime of Gen. Augusto Pinochet in 1973, was a revolutionary activist and key figure in Chile’s Nueva Canción (New Song) movement, known for its strongly folkloric rhythms and lyrics that spoke of and to the working class and poor. While remembered and still celebrated internationally for his folk music and Marxist credentials, Jara’s musical tastes and friendships were more complex than many assume today, Barr-Melej explains in Rockaxis.

Barr-Melej’s most recent book, "Psychedelic Chile: Youth, Counterculture, and Politics on the Road to Socialism and Dictatorship"  (2017), which delves into rock music and its implications in during the government of Marxist President Salvador Allende (1970-73), notes Jara’s passion for rock music—a genre that his fellow Marxists tended to reject outright as bourgeois, imperialist, and culturally empty.

Psychedelic Chile has drawn considerable attention and acclaim in Chile. In 2017, for instance, the work was named a “Book to Highlight” by the large Santiago newspaper La Tercera. In 2020, Barr-Melej was an invited guest (virtually) at the Allende Foundation in Santiago, where he presented on youth culture and politics during the Allende years in an event marking the 50th anniversary of Allende’s victory in Chile’s 1970 presidential election.

Dr. Brandon Kendhammer, Associate Professor of Political Science and Director of the International Development Studies Program in the Center for International Studies, has been named the Senior Research Advisor for the RESOLVE Network’s Learning from Local Peacebuilding Approaches initiative.

Housed at the US Institute of Peace in Washington, D.C., the RESOLVE Network is a global consortium of researchers, research organizations, policymakers, and practitioners committed to empirically driven, locally defined research on the drivers of violent extremism and sources of community resilience. International stakeholders established RESOLVE to generate, facilitate, aggregate, and synthesize methodologically sound, locally informed research on the dynamics of violent extremism.

RESOLVE is a resource hub for researchers, practitioners, and policymakers in need of nuanced, multidisciplinary, empirical approaches to analyze the drivers of violent extremism and sources of community resilience. RESOLVE’s work provides key insights on violent extremism by establishing connections and asking critical questions to enhance and inform P/CVE research, policy, and practice.

Dr. Kendhammer, most recently the co-author of Boko Haram (Ohio University Press) was previously a principal investigator on a project for RESOLVE’s Lake Chad Basin initiative exploring how the global war on terror and the Boko Haram insurgency affect Muslim university students in Cameroon. He is a leading expert on religion, governance, and conflict in West Africa.

Supported with funding from USAID’s Africa Bureau, the Learning from Local Peacebuilding Approaches Initiative is a multi-year effort to investigate and frame the linkages between peacebuilding, governance and human rights, community resilience, and countering violent extremism at the local levels, together with local conflict resolution mechanisms and the role of traditional and customary authorities.

“Dr. Kendhammer’s work with the RESOLVE Network is indicative of his steadfast commitment to applied scholarship and to making the world a better place,” said Dr. Patrick Barr-Melej, CIS interim executive director. “He is a credit to this university, and his achievements speak to the vast and deep knowledge and expertise of OHIO faculty members engaged in international research and teaching.”

LeRiche’s remarks were focused on the development of a Hybrid War Crimes Tribunal in South Sudan as he discussed key issues and considerations to properly contextualize the tribunal and how important local legitimacy will be to South Sudan’s stability and future.  The session was hosted in collaboration with KAS-Africa, at the University of Johannesburg and the sessions can be viewed  here.

LeRiche coauthored the book, “South Sudan: From Revolution to Independence,” published by Hurst and Co. and Oxford University Press, explains how South Sudan became the world’s newest state. He has also written about the approach of integrating armed groups after peace agreements and other aspects of post-conflict security sector reform as a part of peace building. In addition, LeRiche works as adviser on defense education supporting security sector reform programming. Additional information can be found on the Global Leadership Center website.

Dr. Caroline Kingori, an Associate Professor and Interim Associate Dean for Research within Ohio University’s College of Health Sciences and Professions, has been awarded a Visiting Professor Fellowship in Kenya.

Later this year, Kingori will depart for Kenyatta University to support academic activities and work on public health education and research. For Kingori, who was born and raised in Nairobi, Kenya, this opportunity has been years in the making. Her project will last roughly 80 days, September to December 2021.

The fellowship is offered by The Council for the Development of Social Science Research in Africa (CODESRIA). The organization provides various opportunities between African scholars in the Diaspora and those in the continent to collaborate, as well as enhance cooperation among African Universities and those in the West. CODESRIA aims at strengthening teaching and research in social sciences and humanities in higher education in Africa.

“I have always been interested in enhancing both research and educational capacity within public health in Africa,” Kingori said.

“Given my interests in reproductive and sexual health, I was drawn to this university because they recently developed this new department in 2018. Also, there’re a lot of opportunities for growth in their curricular and research priorities,” Kingori said.