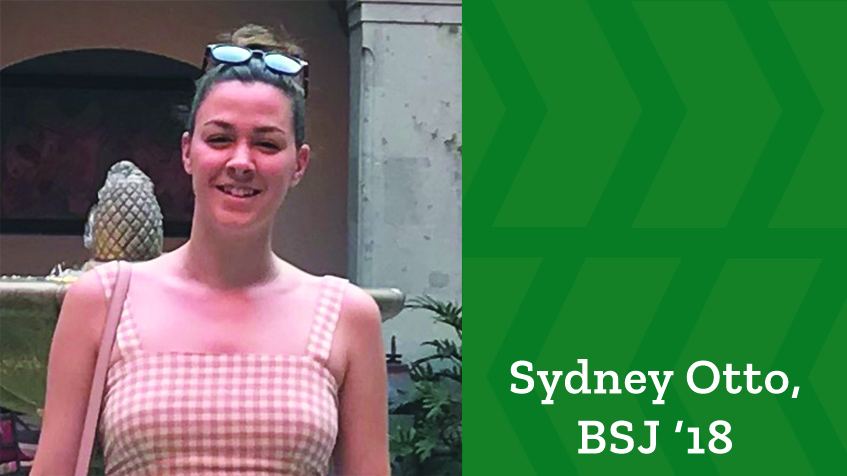 Current job title and location: ​I am the assistant digital and social editor at Hemispheres and The National in Brooklyn, New York.

What do you do? I run all the social media accounts for the two magazines and develop our social strategy each month. I upload all content to our websites, which I'm currently redesigning. I also get to write a few articles for the magazines each month including hotel reviews and celebrity interviews.

What made you come to Ohio University? Were there other places you considered? Initially, I decided to go to Ohio University because it was my cheapest option. I really wanted to get out of Ohio and out of a small town. I had applied to and gotten into five other schools, but they were too expensive. I reluctantly went to Ohio University, but I quickly realized I was exactly where I was supposed to be. I also kept that drive to get to a big city, and here I am!

How did the Scripps College of Communication equip you with the skills you needed to succeed? I would not be where I am today without the amazing professors I had. I'm pretty sure I took every class that Julie Agnone ever taught. She's an amazing professor and editor, not to mention her career is unbelievably inspiring. I also took Bill Reader's food journalism capstone course. I was nervous because I had heard rumors about how tough he is, but he knows exactly how to push you to become a better writer capable of accepting criticism and growing from it. I know those are skills I'll use for the rest of my career.

What about your experiences here was so memorable? The relationships I built with my peers, my professors and my coworkers were the most invaluable takeaway from my time at Ohio University. I've made so many great friends from my time in college. I miss being able to see them nearly every day and getting coffee at Donkey or drinks at Jackie O's. We still keep in touch and see each other as often as we can, and I'm grateful that our time at Ohio University is always going to be something that we share. I've loved staying in touch with the faculty and staff that I worked with as well.

Tell us about your career path. While in school, I had several internships. I was also lucky enough to work in my field on campus. Additionally I was a part of several student orgs where I developed my skills. In the months leading up to graduation, I was applying to jobs every single day. After I graduated, I was unemployed until September. I was so discouraged during those months, but now thinking back, I wouldn't trade those months for the world. I spent so much valuable time with my family. Eventually I got a part-time internship at the company I currently work for and additionally worked part-time at a coffee shop near my apartment. In my free time, I kept applying for full-time positions. Eventually, I got an interview and then a second interview at a different magazine. I told my current editor-in-chief that I had a second interview and she worked with our CEO to make me a full-time position at the company. And I've worked here ever since. I have no plans to move anytime soon!

What advice do you have for current students? If you have a question, just ask it, even if you think it's dumb. Don't know how to deliver a pitch? Ask! Don't know how a 401k works? Ask! Don't know how to use the scanner? Ask! Especially at internships and jobs, it's better to ask (and take notes!) and do it right the first time rather than mess up until you figure it out.You're going to get discouraged when you get turned down for jobs and internships and there are going to be tons of people who tell you don't get discouraged, but you're going to anyway. It's okay to be discouraged, but it's also important to keep applying and keep trying even when you are discouraged.