Los Angeles, California and Athens, Ohio may be thousands of miles apart, but we share one big commonality: all of us live on planet Earth. This is the subject explored by young people from around the globe during a student debate piloted at the National Space Society’s (NSS) annual International Space Development Conference from May 24 to 27, 2018, in Los Angeles by the NSS Enterprise in Space Academy (EIS) now named the SpaceEdge Academy.

Lorna Jean Edmonds, Ohio University’s vice provost for global affairs and director, Center for International Studies, and professor of interdisciplinary health studies, College of Health Sciences and Professions, is the coordinator of the NSS SpaceEdge Academy Space Policy and Good Governance Center of Excellence platform. She collaborated as a member of the organizing committee led by Frances Dellutri, NSS member and retired schoolteacher, along with members of the NSS governance and executive team, and two students from India to plan the first of what will become an annual ISDC event.

Universalization is a term recently defined by international development and globalization researchers as referring to “the understanding of planet earth as one world within the universe and the imperative to approach development and sustain peace through cooperation,” says Dr. Edmonds. It leverages the value of space for building human bonds world-wide through the universal policy agenda espoused by the United Nations (UN) Sustainable Development Goals. The UN advocates for development that embraces global diversity with an inclusive - all of us - agenda.

Space is no longer about science fiction, and is unlike any other frontier humankind has encountered. Increasing the public’s understanding of space and access to the cosmos has the potential to revolutionize fields from business to science, culture, and food security. Exploration in space offers significant value for humankind. Academics focused on the subject suggest that defining the expansion of humanity’s reach outside the global sphere is important because universalization raises many questions and provides few answers. Of particular importance is how humanity will be governed in this universal context. For researchers like Dr. Edmonds, such concepts are awe-inspiring, but not discussed nearly often enough.

“As we move from a mindset that considers ‘one country within the planet’ to ‘one planet within the universe’ the borders we have drawn between ourselves begin to fall away,” Dr. Edmonds explained. “The entire way we have structured society could be upended.”

Lack of discussion and debate around these subjects was the inspiration for the ISDC Universalization pilot debate. Sixteen of over 400 middle school students attending the conference from 13 countries and seven states in the US took part in the program. Starting to question the structure and potential impact of global cooperation around space in 2018 furthers the imperative for ensuring sustained and peaceful space exploration. The hope of the debate organizers was to spark a competition, based on cooperation and compassion, among this generation of students to consider the implications of space development on all of us. As, ultimately, it will be this generation who will be tasked with handling the tough questions raised by universalization.

“When we saw these students speaking about universalization and using the terms that we use as if it was always their terms; I don’t think there was anything more rewarding” says Edmonds.

For Dr. Edmonds, the ISDC debate is one-step closer to considering many of the questions raised by universalization, but there is more work to be done. In the works for the fall by the NSS SpaceEdge Academy team and Dr. Edmonds are plans to hold the debate again next year at ISDC in Washington, DC and to launch a research paper competition. Those interested may email edmonds@ohio.edu for more information or visit the SpaceEdge Academy website.

Zach Reizes is an undergraduate student collaborating with Dr. Edmonds on universalization project development at the Ohio University Center for International Studies 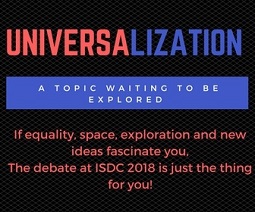