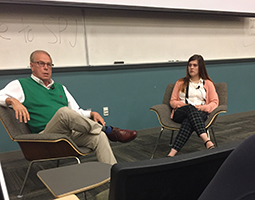 Photographer: Erin FranczakFormer Ohio Gov. Ted Strickland takes questions from the audience at a recent meeting of Ohio University’s chapter of the Society of Professional Journalists.

Ohio University’s chapter of the Society of Professional Journalists (SPJ) welcomed former Ohio Gov. Ted Strickland to its Oct. 10 meeting where he spoke on politics today, the future of journalism and his return to Athens.

The former governor and longtime U.S. congressman shared with the students his history with the Ohio University and Athens communities. He noted that his first visit to the University came as the result of his former deputy chief of staff for policy, Janetta King, who was appointed to the Ohio University Board of Trustees.

“I have a fondness for Ohio University,” Strickland said. “I have spent a lot of time in Athens, on campus, as a result of the multiple campaigns I’ve run.”

Strickland credited Athens – both its student population and permanent residents – with some of his political success, noting that it was Athens County that gave him his first win in his campaign for the U.S. House of Representatives.

Taking a step back from politics after his unsuccessful 2016 bid for the U.S. Senate, Strickland finds himself back at Ohio University, thanks, again and in part, to King who is serving her final year on the University’s Board of Trustees. According to Strickland, it was King who approached College of Arts and Sciences Dean Robert Frank about Strickland engaging with Ohio University students.

This semester Strickland has been working primarily with students and faculty in the College of Arts and Sciences’ Wealth and Poverty theme (see related article) while also visiting other Ohio University classrooms. He shared with the audience some of the experiences he has had living among Bobcats at the University’s Bromley Hall, including a 3:30 a.m. fire alarm.

“I really think politics pervades every part of life, and if you are alive and you are engaged in society, you are involved with politics,” Strickland said about his future endeavors. “I will always be involved in politics.”

On the topic of journalism, Strickland noted that many people struggle to find the truth amid all the media outlets. He said that many people have busy lives and do not have time to research political news to decipher the facts.

“I think a lot of people are confused and they just simply do not know what’s factual and what isn’t,” Strickland said. “Fake news is a reality.”

“I think it’s important for students to take unique opportunities that the school provides like this one,” Lindsey Curnutte, a senior studying political science and journalism, said of Strickland’s visit to SPJ and the Athens Campus. “It’s not every day that you’ll get to spend an hour or so listening to the former governor of Ohio. I’m glad I got the chance to hear from Gov. Strickland while he was here at OU for a few weeks.”