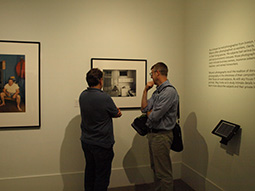 On Friday, Sept. 30, the Ohio University Kennedy Museum of Art held its opening reception for the “House Proud, Portraits of the American Home” exhibit, which will be on display through Dec. 17.

Sam Dodd, a visiting assistant professor of art history, curated the exhibit which explores the visual culture of homeownership and homemaking within the United States.

He said the show is called “House Proud” because it explores a history of photography that tries to take a portrait of a person in relationship with their house. He said it’s a very specific genre of portraiture.

“I work a lot on American housing. I look often at commercial images of housing. The branded advertising based images,” Dodd said. “I was struck by images of the home that are not intended for the consumerism, but documenting a real-lived experience.”

The exhibit has three distinct rooms that display art works of people posing inside or outside of their home.

In the first room of the exhibit, patrons will notice that the historical photos are all taken outdoors.

The exhibit’s second room has photographs taken by Ironton, Ohio, attorney and photographer Lloyd Moore. He left the photographs to the Kennedy Museum after his death in 2010.

“Moore’s photos are views of the interior,” Dodd said. “How do you associate private interior spaces with the public presentations of yourself? If you were going to take a portrait in your house, where would you sit?”

Last spring, Dodd commissioned Brauner to capture the images from inside the houses of modern-day homesteaders from Athens County.

“Sam talked about deadpan-style photography and documenting the homes without an angle or creative view from the photographer,” Brauner said. “We wanted it to be Athens based without it being too cliché. When I was walking through their homes, it felt like I was in a modern-day kindergarten show and tell. They were so excited and proud of the work they've done.”

Dodd praised Brauner for her work on the project.

“Cassidy localizes the project to Athens County,” Dodd said. “She worked with Athens-based homeowners who identified themselves as alternative housing models. Their houses were built by themselves using local building traditions, with sustainable land, local food culture and local materials. These people are modern-day homesteaders. What she has done beautifully is capture moments. Her work is a perfect finale to the show.”

Also in the third room is historical TV footage playing in a loop. The three-part footage contains former United States first lady Jackie Kennedy giving a tour of the White House, TV personality Martha Stewart describing a complete restoration of an American home and two teenagers showing off their uncle's house in the Hamptons on the TV show “Teen Cribs.”

Dodd said the “House Proud” exhibit updates the image of home by moving through history and narrowing by region.

“It starts with the frontier, then goes to Ohio then finishes in Athens County,” Dodd said. “The videos provide context about visual culture of homeownership and homemaking in America.”

Dodd asks visitors to the exhibit to make sure they look closely at these works.

“They demand through their lush color or specific framing a very close inspection,” Dodd said. “They are each individually a single image of a person and a space, but together they are a plural of the American idea of home. They give us a history of architectural and fashion trends, design tastes, ideas of equality and identity. These things are constantly in flux."

Ed Pauley, director of the Kennedy Museum of Art, said “House Proud” is a slice of America and the photos bring out people's pride in their property and how it links to their identity and accomplishments.

“We all have that association with our homes and property, so you see the same thing in others,” Pauley said. “We are always aware that our house is tied into our identity. They're proud of their house because it makes a statement into who they are.”

Dodd said he likes to think that these photographed individuals all invited us into their homes and some of them want to show off who they are as makers, builders and consumers.

“Some of them just want us to sit with them and make ourselves at home," Dodd said.

Other associated upcoming KMA programs include:

The Kennedy Museum of Art, which is free and open to the public, is open seven days a week. For more information, visit www.ohio.edu/museum. 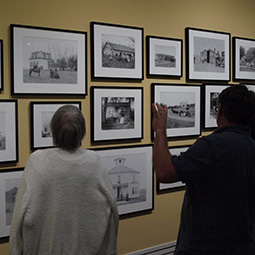 Photographer: George E. Mauzy Jr.Patrons at the Kennedy Museum of Art check out the turn of the century homesteaders photographs 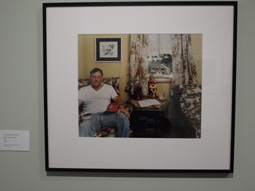