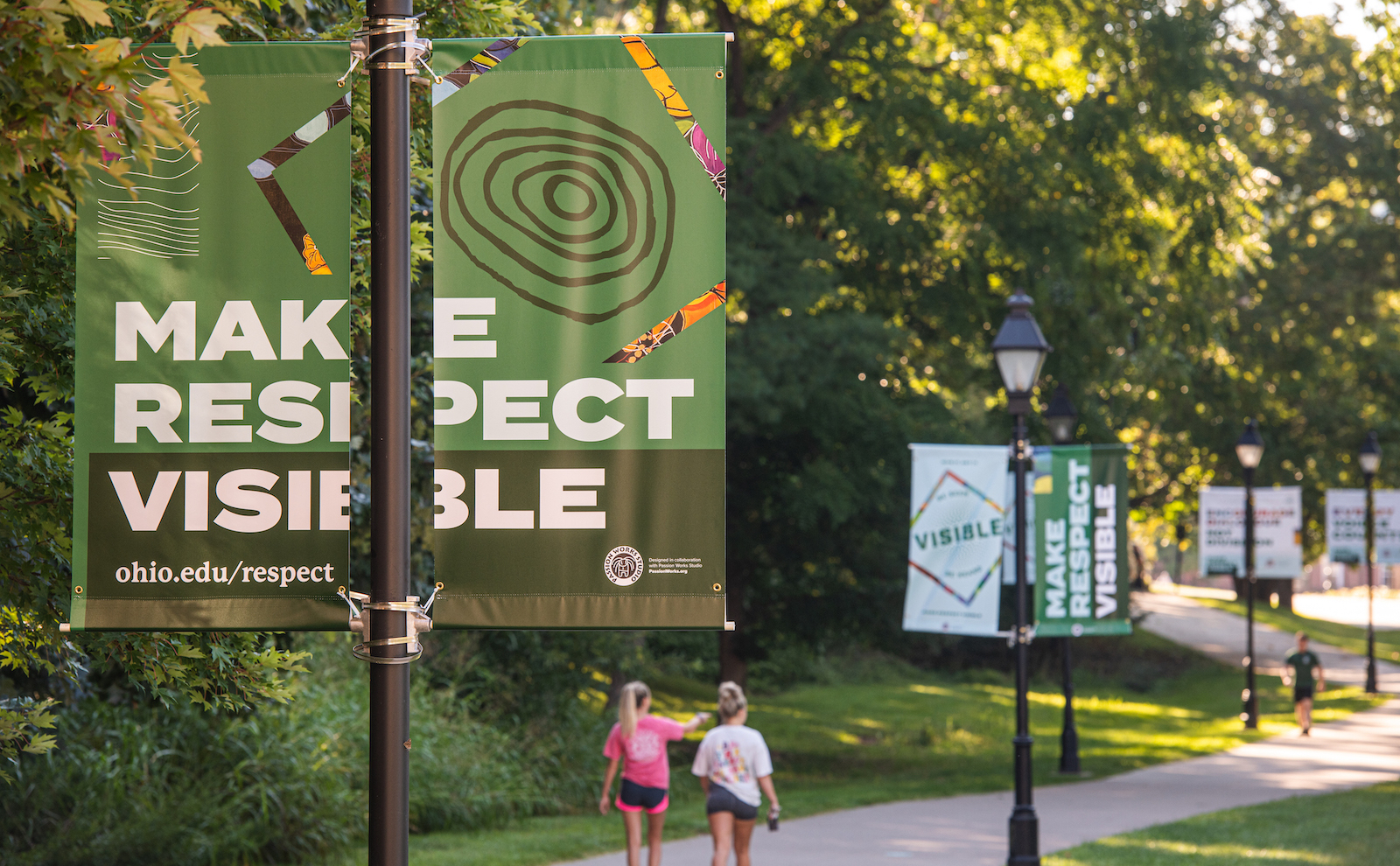 Ohio University is expanding its Make Respect Visible initiative not just to OHIO students, but the entire Athens community.

“This year the goal was not only to continue that conversation with the University, but furthering the message beyond the University to the community a little more,” said Aaron Harden, director of creative and brand at University Communications and Marketing.

Make Respect Visible is a collaborative initiative between the Division for Diversity and Inclusion, Division of Student Affairs and University Communications and Marketing to create a baseline culture of respect for the OHIO community. It aims to reduce bias through open and respectful dialogue that extends beyond culture and background.

Initially, Make Respect Visible was part of a branding effort by the University that was officially unrolled across campus last year. The central tenets of the initiative — “Encourage Dialogue, Not Division,” “Every Voice Counts,” “Listen More, Judge Less,” and “Spread Ideas, Not Hate” — were featured prominently across campus this past academic year. However, it soon snowballed from just a marketing campaign into a set of ethos central to OHIO.

“It became very obvious quickly that Make Respect Visible was going to be more than just a marketing campaign,” said Duane Bruce, executive director of the Division of Diversity and Inclusion. This year, incoming students are asked to voluntarily sign a Make Respect Visible pledge, committing to the ideals of the effort. 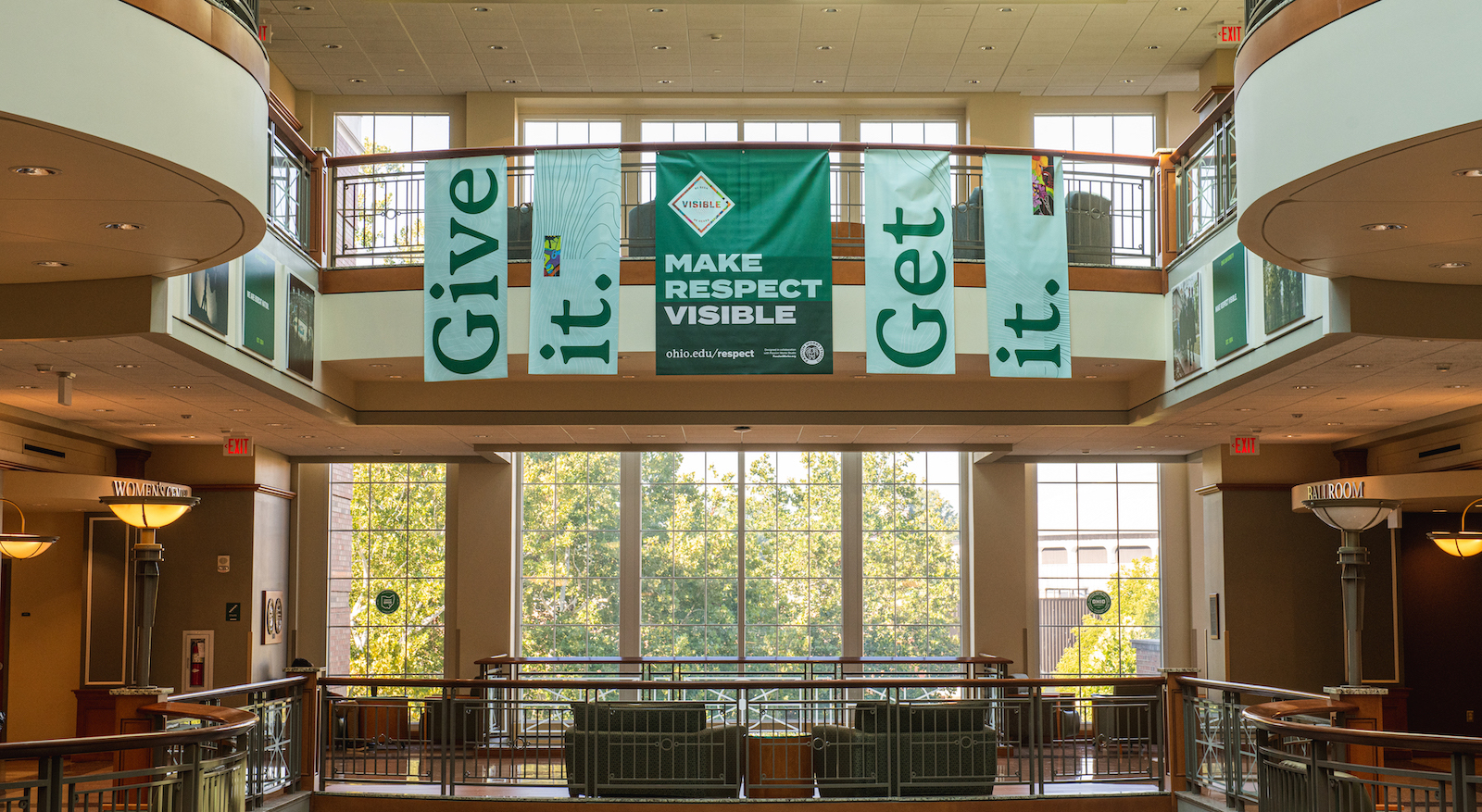 To expand its reach into the greater Athens community, Ohio University has partnered with Passion Works, an Athens-based art studio known for its vibrant displays and rainbow-colored palette.

“A natural partner to making that connection to the community is Passion Works,” Harden said.

Passion Works is an obvious bridge between the University and Athens community because of its ethos of treating all people with dignity and respect, Harden said.

“This is the continuation of building the community in which we want to live, and making visible the spirit of Athens,” said Patty Mitchell, executive director and founder of Passion Works. “This is one of the things that is making the spirit of Athens more and more visible.”

Mitchell is a two-time Ohio University graduate (BFA ’87, MFA ’91) who has elected to make Athens her home. She opened Passion Works 24 years ago not only make art that reflects the Athens community, but also to provide a space for artists with and without developmental differences to create art together.

This is one of the reasons why Passion Works is a natural partner for the initiative – the values of Make Respect Visible directly overlap with those of Mitchell’s studio, she said.

The Make Respect Visible artwork created by Passion Works and Ohio University will be featured on banners, yard signs and stickers that will be displayed across the University and Court Street.

Instead of treating diversity and respect like a series of boxes that need to be checked off a list, Make Respect Visible aims to mold the core culture at Ohio University and is a way for every member of our community to get involved.

“It is not the end of the conversation on how we can promote anti-bias behaviors as a community; it the beginning and gives us a baseline for holding each other accountable for the way we treat each other,” Bruce said.

However, changing the culture of any institution takes time, so Make Respect Visible is designed to work its way into campus life through a series of phases, stages and steps. To expand those principles, this year Ohio University will have two core classes feature intervention and anti-bias initiatives and incoming students will be asked to voluntarily sign the Make Respect Visible pledge.

“It has really emerged into one of the ways we promote anti-bias behaviors in our communities,” Bruce said.

Though Make Respect Visible aims to measure its success through incremental change, for Bruce the initiative could not have come at a more appropriate time.

“Make Respect Visible was designed to bring our University community together, in a world where it feels like we are often time divided,” Bruce said. “We may not always agree, but the Make Respect Visible expectations provide us with a tool to engage respectfully across our differences.”