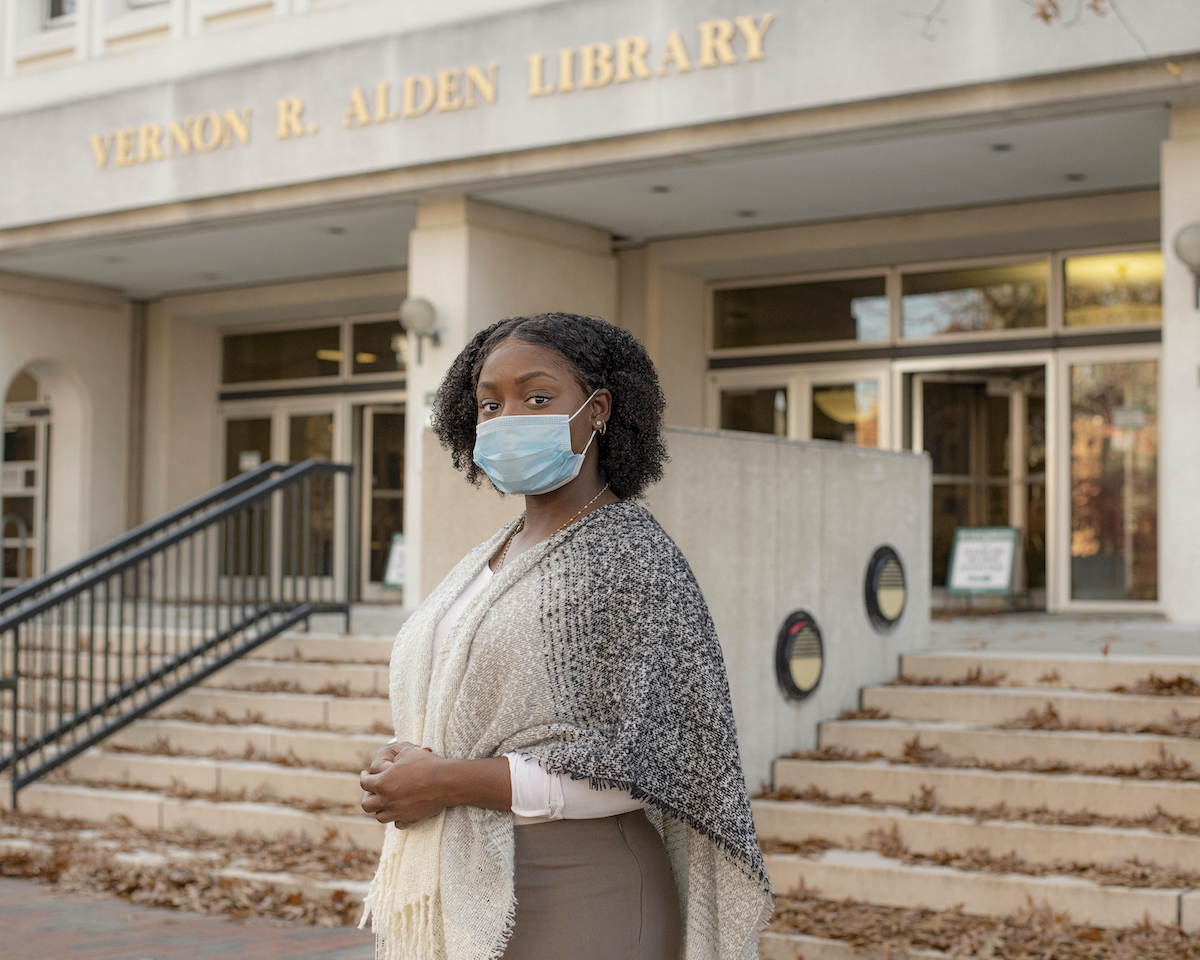 Imani Estrada first began working at University Libraries in the spring of 2019. Estrada, a junior business marketing major in the College of Business, had never considered working at a library before, but was drawn to an innovative new internship program initiated through OhioLINK to increase diverse perspectives in libraries across the state of Ohio. Estrada was the first intern in the program at Ohio University.

“When they told me about the different departments that they have here at the Libraries, I jumped at the opportunity,” she said.  “I was excited when I got the job because [at the time] I was a sophomore in the College of Business and my major is business marketing, but I had no idea what I actually wanted to do.”

Eileen Theodore-Shusta, director of planning, assessment and organizational effectiveness, and Estrada’s supervisor at University Libraries, said that they were initially looking for students who had limited experience with libraries. The internship was designed to build familiarity with library systems for students who had never considered librarianship as a career option.

“It's really just a holistic view of how the entire Libraries [system] works,” Theodore-Shusta said. “Most people know that you can go to the Libraries to get materials, have space for study or collaborative work and you can check things out, but I think that the behind-the-scenes part of running a library is pretty invisible to most people.”

OhioLINK is short for the Ohio Library and Information Network, the statewide library consortium that allows member libraries to easily share print and digital resources. Several of the member institutions are participating in this first iteration of the OhioLINK internship program.

Each internship lasts for three semesters, during which the intern spends time in several different departments before choosing an area to complete a capstone project during their final semester. Part of Estrada’s Fall 2020 semester, for example, was spent working virtually with Ohio University Libraries’ Digital Initiatives department.

Working in Digital Initiatives, Estrada transcribed journals and other texts from Los Amigos, a popular minority student organization that started at Ohio University in the 1940s. This makes the information contained in the texts easier to access for the Libraries’ patrons.

“I think something that’s interesting is that I get to see just how people kept really descriptive letters about what was going on, especially here at Ohio University,” she said.

Estrada also said that she learned a lot during the internship and brought her own diverse perspective to University Libraries.

Part of the goal of the OhioLINK internship program is to learn from the interns, as well as teach them about libraries. According to Amy Pawlowski, the executive director of OhioLINK, the initiative was initially put together because a group of OhioLINK member institutions were looking for a way to expand diversity initiatives to make more people feel welcome in academic libraries.

“When you have a service-oriented work environment, it is important that the community that you are serving sees themselves reflected back in your staff,” Pawlowski said. “Librarianship is so much about creating relationships, and especially in academic libraries, it’s about creating relationships with students, so it’s important that the staff reflect the student body as well.”

Theodore-Shusta said that she hopes that the interns in this program go out and tell the world about their internship so that more people can learn about the wide breadth of responsibilities and jobs that fall under librarianship. From there, she hopes more people become interested in librarianship, and that diversity and inclusion in libraries continues to grow.

For now, Estrada is enjoying her time at the Ohio University Libraries and said she hopes the OhioLINK program is around for good.

“I just hope that this program does become a regular internship for students; I think this could be something that a lot of people would enjoy,” Estrada said. “One of the biggest things I love is that people here in this Library generally love what they do and are passionate about it, and that’s something that continues to drive me and my work for the Libraries.”