For more than 30 years, Ohio University’s Archaeological Field School has trained hundreds of anthropology students how to excavate and preserve artifacts from southeastern Ohio sites that may range from privately owned farms to the Wayne National Forest.

It’s a perfect training ground for the next generation of cultural resource managers, charged with protecting the history left behind by early Americans thousands of years ago. These professionals are employed by government and private entities to evaluate sites prior to excavation or construction work.

“Through our field schools, we train students in all techniques—site discovery, survey methods, excavation and mapping,” said Joseph Gingerich, an Ohio University assistant professor of anthropology who serves as director of the field school. “We also like to try to expose students to as many time periods as possible.

“Students can have an opportunity to record a historic homestead, but also work on prehistoric sites that range from 1,000 years old to 6,000 to 7,000 years old,” he added.

The OHIO Archaeological Field School offers a summer field work experience every other summer, as well as opportunities to conduct research on the artifacts in a new laboratory facility on the Athens campus during the semesters in between. In addition, the anthropology students work with community members across southeastern Ohio to help identify and describe newly discovered cultural items of significance to the region. 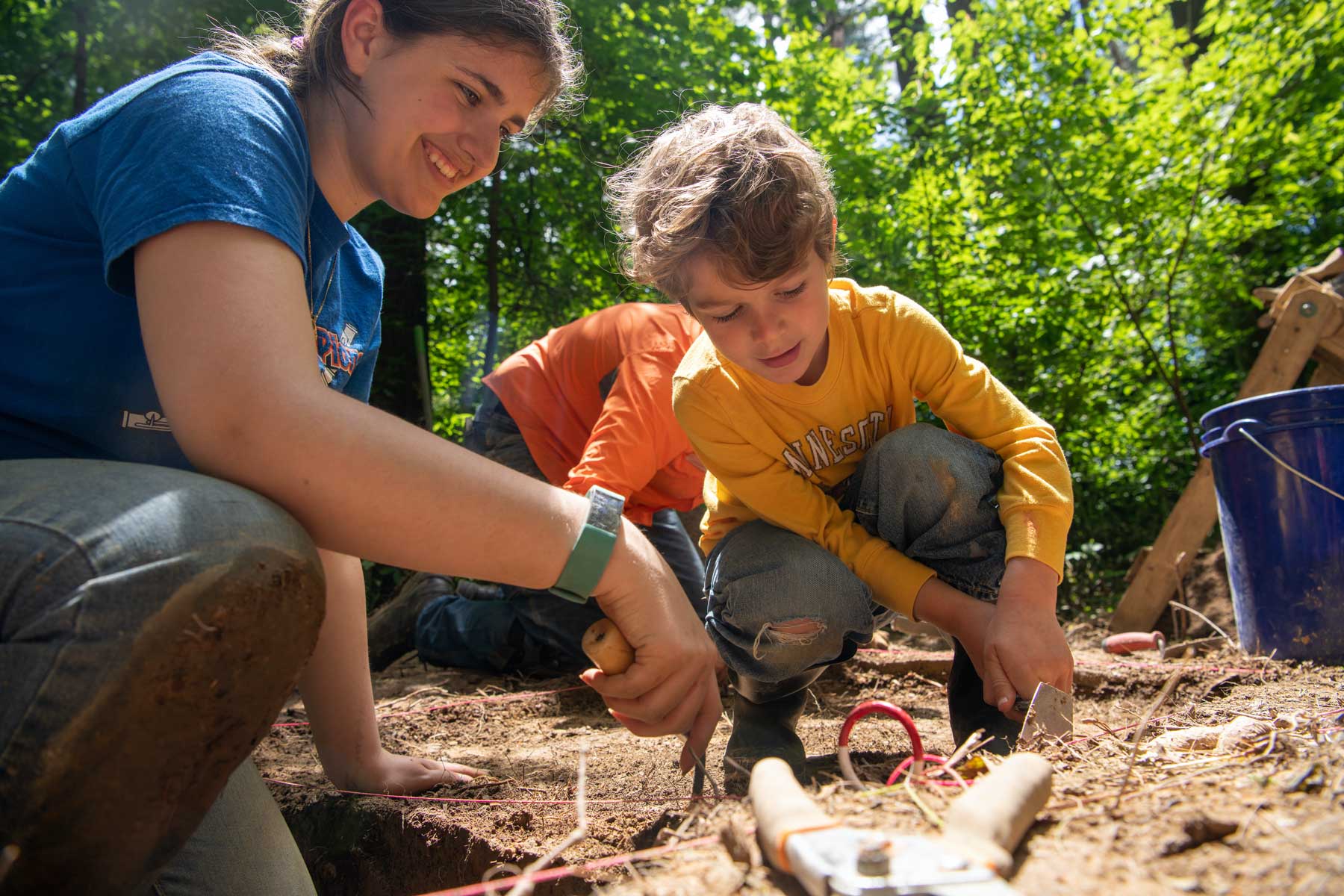 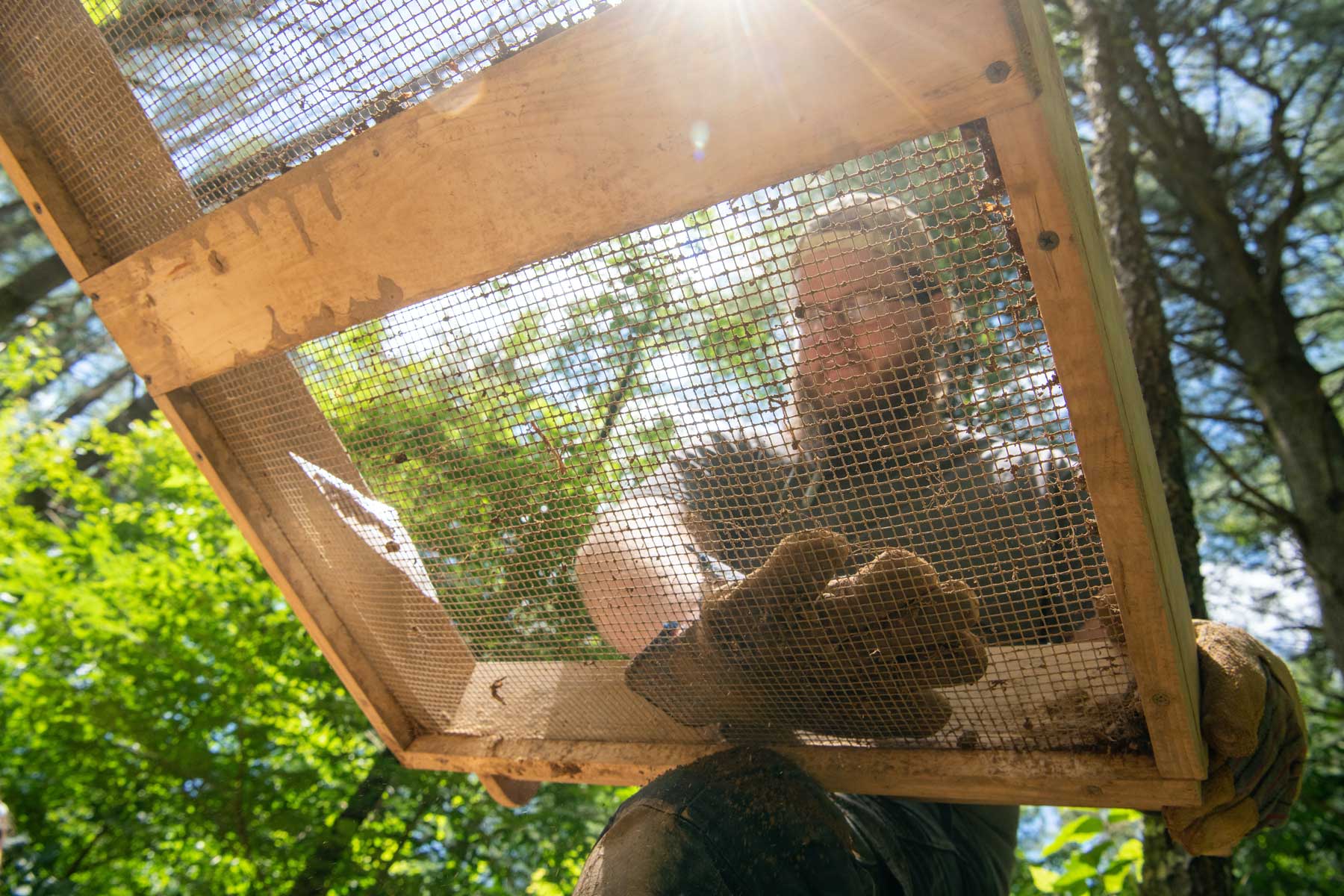 Undergraduate student Collin Williams looks for artifacts in the Wayne National Forest as part of the Archaeological Field School.

During summer 2019, the field school worked in partnership with the Wayne National Forest to further study sites in the Monday Creek watershed. Thirteen undergraduate students excavated two sites that dated from the Late Archaic (4,500 to 2,500 years ago) to the Middle Woodland period (about 2,000 years ago).

The excavation required students to use technical skills learned in the classroom, such as reading a compass to map out the locations where the team would dig 1 x 1-meter squares, said Brock Bolen, an anthropology major involved in the 2019 project. On site, the students carefully sifted through the soil to identify items such as stone tools, cataloguing and marking items for more detailed examination back in the lab.

“There is a precision to slowly taking small amounts of dirt at a time—and to not damage anything in the process,” Bolen said. Although the dig requires students to engage in challenging, physical labor, undergraduate Olivia Baumgartel enjoyed the experience. Not only did she learn how to execute the key stages of a professional archaeological excavation, but the school taught her how to work well with a team of colleagues.

“It definitely set me on my career path,” Baumgartel said. “I found what I want to do for the rest of my life this summer.”

Both Bolen and Baumgartel went on to work with Gingerich on another field site during fall 2019. At a location where the university and local nonprofit Rural Action hope to build a facility that can turn pollution from old coal mine runoff into paint products, the archaeological team surveyed the property for items of cultural significance. 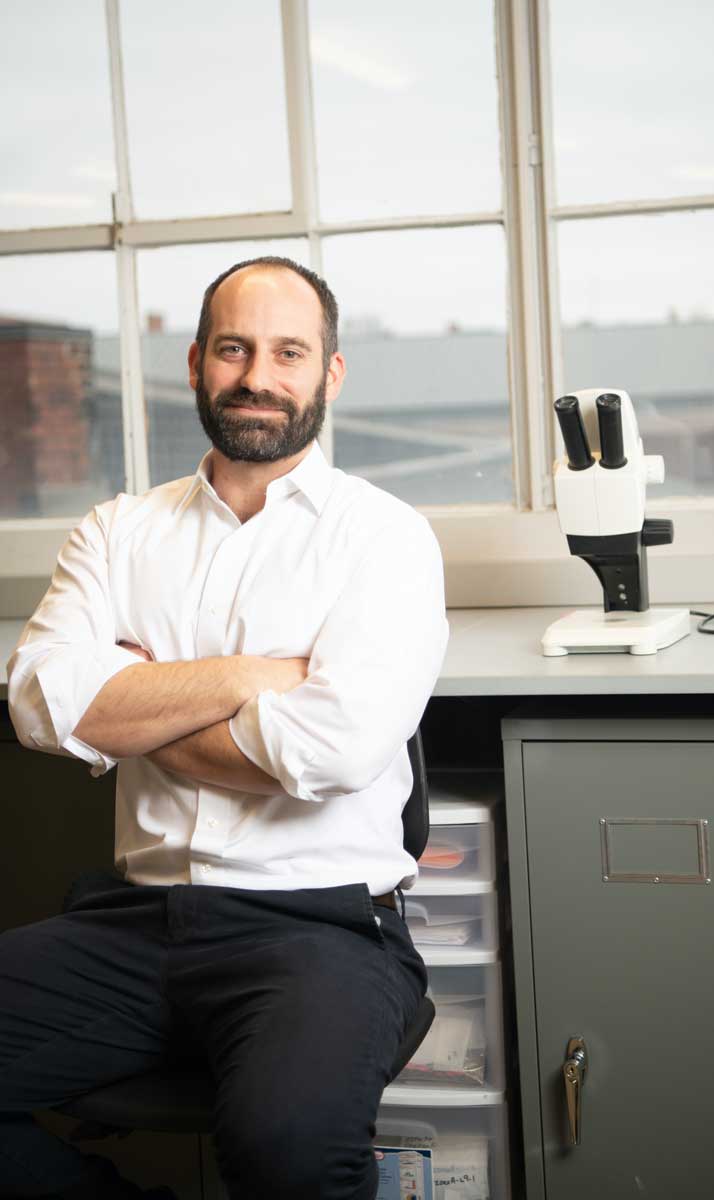 Assistant Professor of Anthropology and leader of the Archaeological Field School, Joseph Gingerich, poses in his lab next to a microscope. 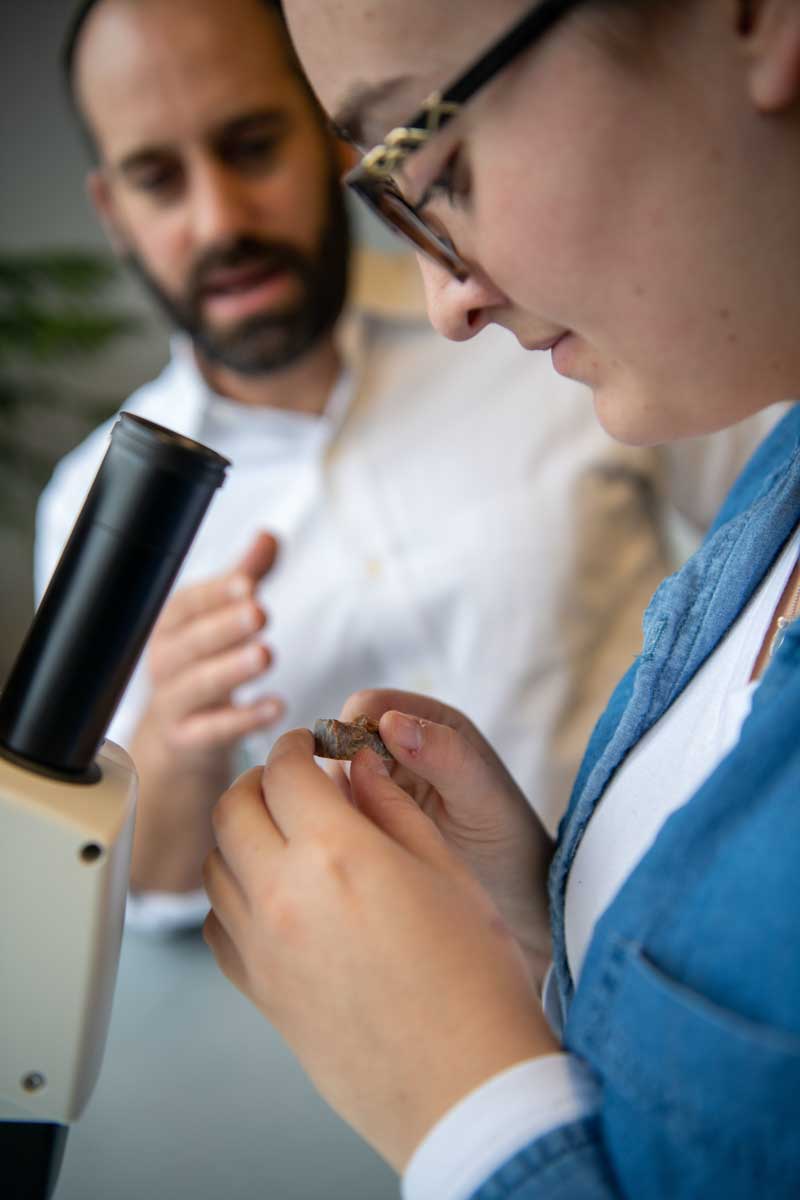 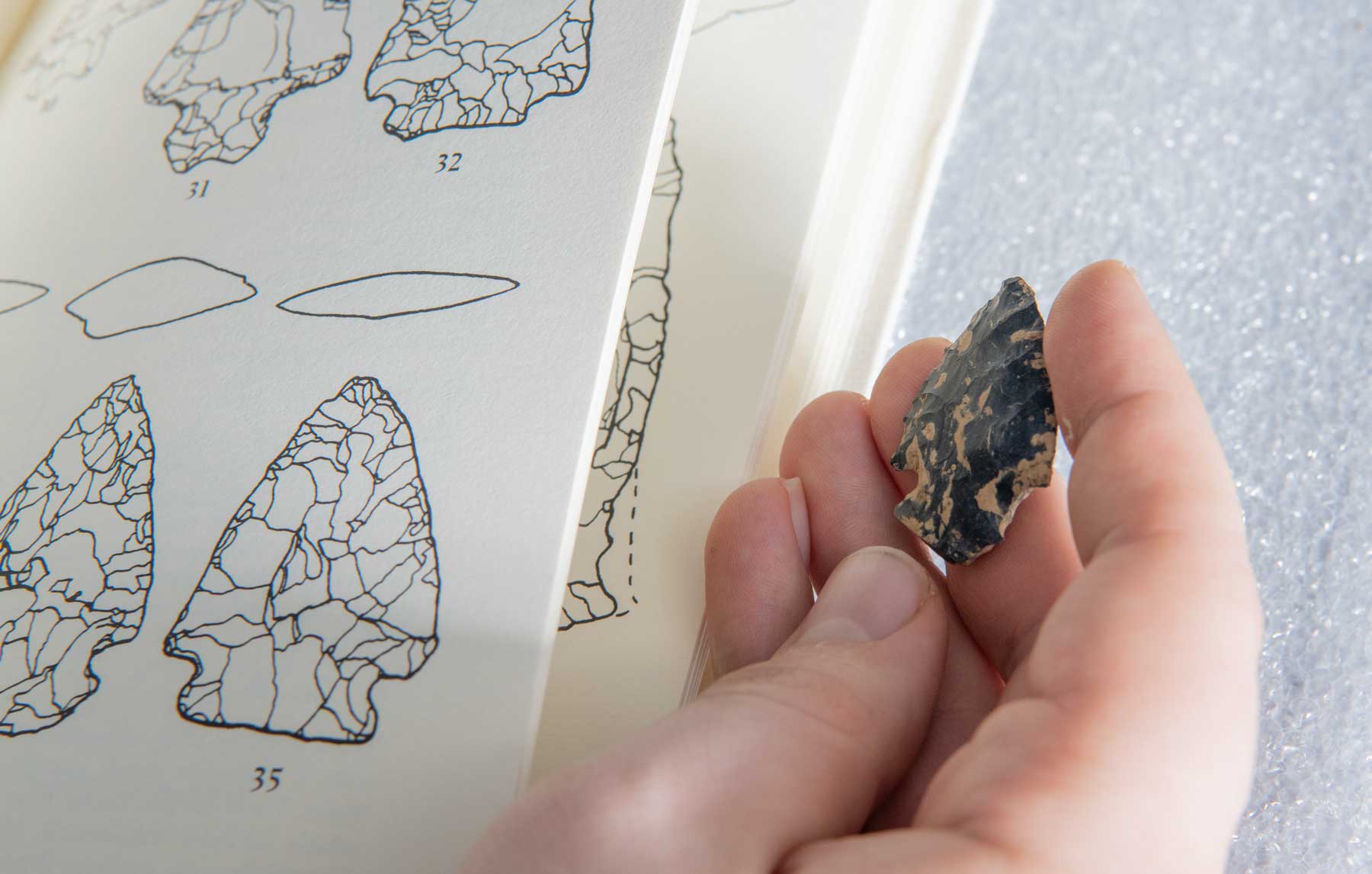 An undergraduate student catalogs an arrowhead found at the Wayne National Forest during the Archaeological Field School site excavation there in the summer.

The Archaeological Field School’s partnership with the Wayne National Forest also can lead to additional learning or job experiences for students. “The students who participate in this work also get the opportunity to network and interact with Forest Service personnel, which opens the doors for further volunteer opportunities and potentially to a job with a federal agency once they graduate,” said Andrew Tremayne, heritage program manager for the Wayne National Forest.

Bolen is one Ohio University student pursuing this path. He completed an internship with the Wayne National Forest last summer, and now is working with AmeriCorps through August. Bolen has gained a wide range of experience that could prepare him for a job with the forest service: archaeological digs, site surveys for a potential new bike trail, fire training, invasive species removal and community outreach.

The students also help the Wayne National Forest meet an important goal, which is to inventory, assess and protect the archaeological and historic resources on its lands. The summer 2019 field school already has made several key discoveries.

Joseph Gingerich, assistant professor of anthropology, looks through specimens collected across Southeast Ohio as part of the Archaeological Field School. 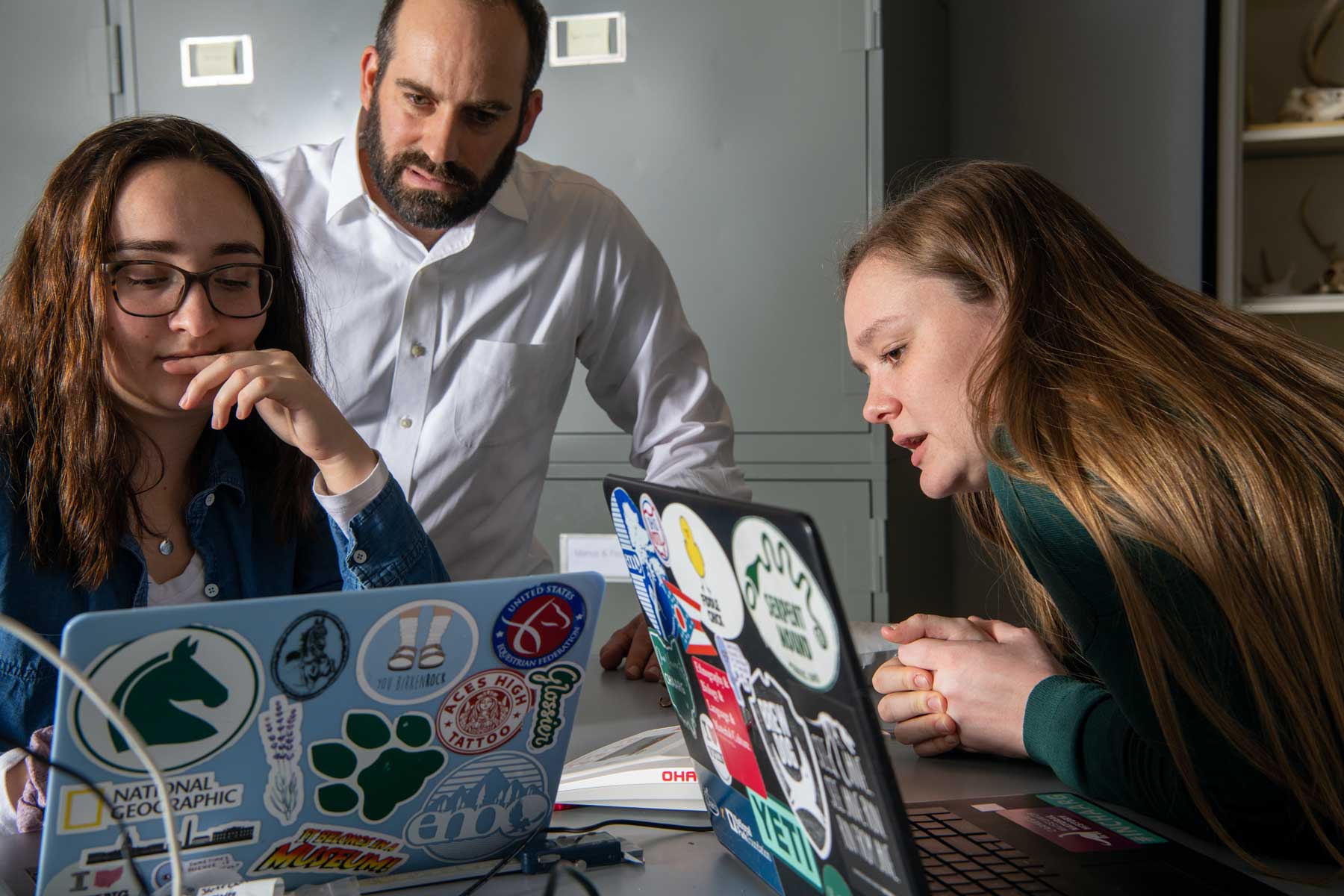 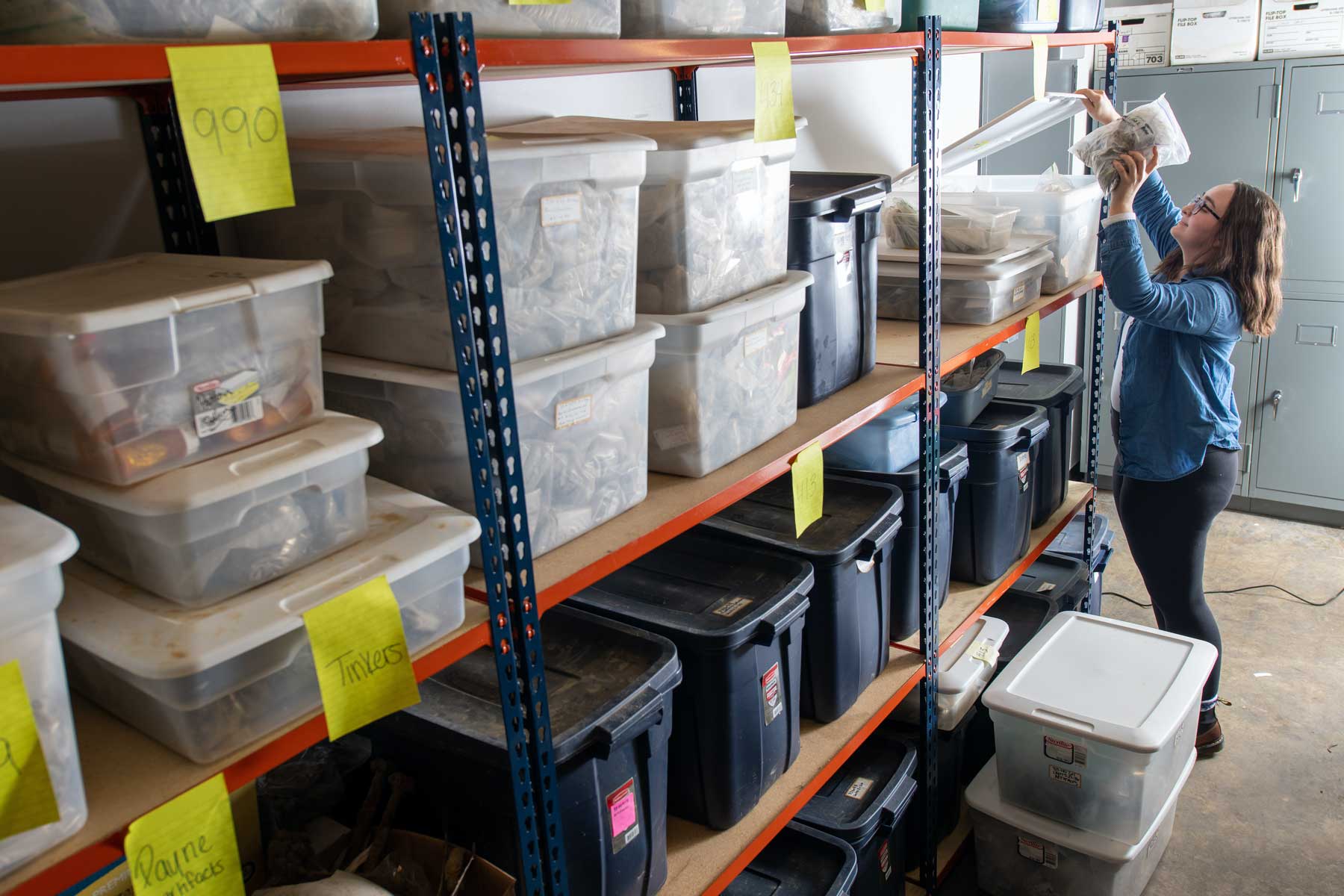 “Not only have we learned that the sites were occupied over 3,000 years ago multiple times for generations, but that the people who lived here had extensive networks and vast knowledge of raw material sources in the area,” Tremayne said. “Additionally, based on our tests and mapping data we can now better define the boundaries of the sites, which allows the Forest to better protect them from damage from projects, such as timber harvest or trail building.”

And on an even broader scale, the students involved in OHIO’s Archaeological Field School are helping to paint a more detailed picture of how the early people of North America extracted resources from the landscape, crafted and curated stone tools and either settled in or moved through different locations over time, Gingerich said. The summer digs, laboratory work and investigation of artifacts found by community members all help fill in the blanks on what early life in southern Ohio looked like. Projectile points discovered in Vinton and Hocking counties, for example, date to 13,000 years ago.

“Given that these represent the first populations in North America, it’s important to understand the density of people not only in Ohio, but throughout the region,” Gingerich said.

More information about the field school