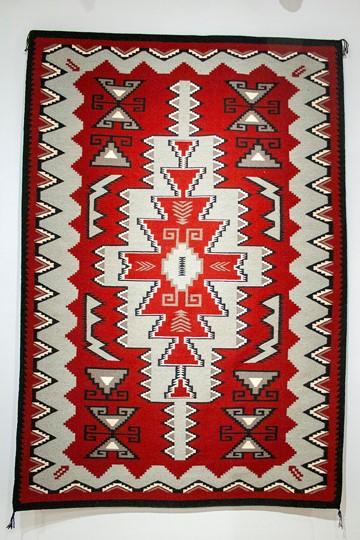 Bob: Shimá looks at this weaving from Ganado and says that the center may be the sun and the entire weaving the Universe.  As the triangles radiate out from the center, they become progressively smaller—a dilation in geometric terms. Shimá’s words and the idea of dilation remind me of a mental game I used to play as a boy (and even sometimes still). I would either zoom in or out, starting with, say, my bedroom, my house, my neighborhood, then Albuquerque, New Mexico, the United States, North America, Earth, our solar system, the Milky Way, and the Universe. The skies are so big in the west—they invite this kind of “dilation thinking” about your place in the universe. Perhaps this weaver, too, was motivated by this kind of thinking as she wove.