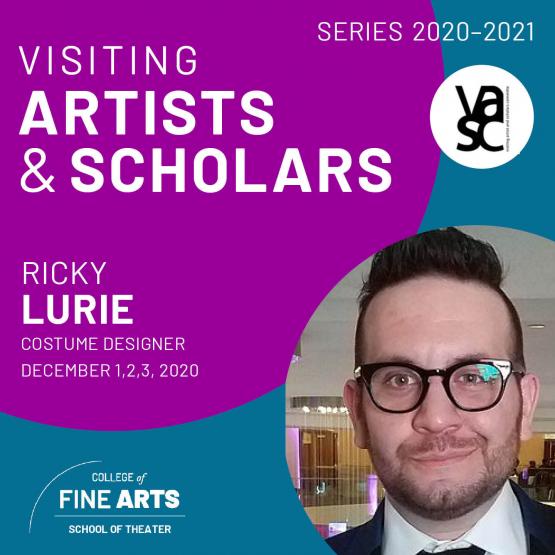 The School of Theater welcomed alumnus Ricky Lurie, MFA ‘14 in Production and Costume Design, as a College of Fine Arts Visiting Artist for a 3-day virtual residency with current BFA and MFA production design and technology students.

Lurie, a costume designer specializing in theater and dance, hosted six hours of discussions and Q&As with student designers. Based in New York, Lurie has designed for Life Could Be a Dream (Cortland Repertory), Godspell (The Gallery Players), The Singapore Mikado (Theater 2020), and Churchill, The Play (Off-Broadway at New World Stages). He is the associate costume designer on Anastasia, which transferred to Broadway in 2017, earning a Tony Award nomination for Best Costume Design in a Musical. Currently, Lurie is the assistant costume designer on a brand-new production of The Nutcracker at Colorado Ballet premiering in November 2021 and fabric consultant for Santa Fe Opera on a new production on A Midsummer Night’s Dream designed by a European design team.

Lurie met with undergraduate and graduate students to discuss various topics in the field of costume design. The first day, students discussed their goals and Lurie shared about his career journey as well as the different types of costumes shops to work in such as opera, Broadway, musical theater, dance, and film. On day two the group discussed the importance of networking within the field throughout their career. Lurie has found networking to be important in his own career progression and shared one of his favorite networking connections.

“I was hired to design both Sea World’s new Electric Ocean nighttime dance family event and Sesame Place’s new parade because of someone I worked with as an assistant on a totally unrelated project,” says Lurie. “The person recommended me for the job because he really like my attention to detail and attitude.”

On the final day, Lurie discussed what a technician/maker should consider when creating a contract and how to read, plan, and incorporate various contracts from makers as a design team.  The group also covered how to budget for costumes and explain costume pricing to others working on a production such as producers and directors. Standing by his emphasis of networking, Lurie provided students with his contact information for future reference.

“The students are so resilient, and they persevere,” says Lurie. “I am invigorated to know that these students are able to bring so much to the table. Working with students keeps me fresh, young and making sure I am on my game.”

Debi Jolly, costume crafts instructor, invited Lurie to lead this conversation to expose students to a range of opportunities in costume design. Jolly and Lurie are both Ohio University alumni who have stayed in touch after working together on Anastasia in New York.

“I appreciate the personal management he took to setting up his career which inspired me, and he is really good at networking,” says Jolly. “I felt [he is someone who] would be great to expose my students to.”

Both Lurie and Jolly shared that this visit has been in the works for a few years now and the virtual platform created the space for students to have this opportunity.

“Talking to Lurie was beneficial and fascinating because he is an active part of the Broadway/New York circuit as far as designers, assistants, and shoppers. It was a wealth of information and organic,” says Klara Wilson, MFA candidate in costume crafts. “Lurie was excited to speak with us and as an alumnus it is a lot more connected and personable because he knows the location and professors. It is inspiring to see him doing the work I hope to do one day.”