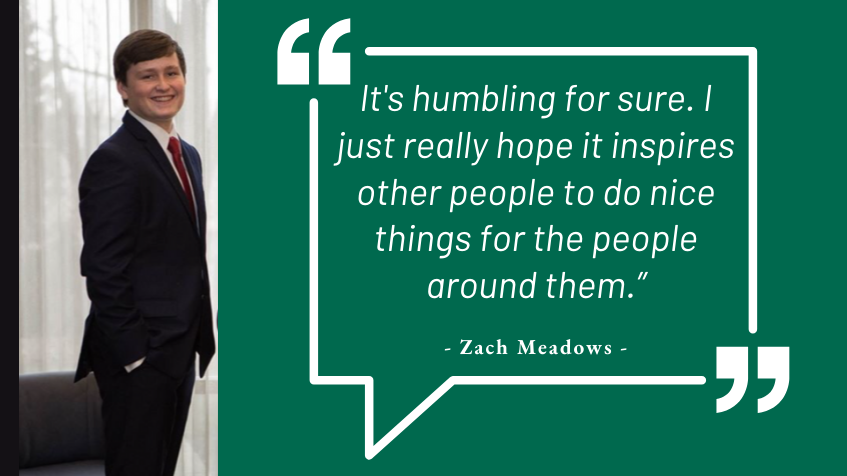 We often hear of random acts of kindness in our day-to-day lives – whether that be giving someone a compliment, volunteering in the community, sending a card, or letting someone go in front of you in line. In these selfless acts of kindness, we typically perform such deeds with the hopes of uplifting someone and without truly knowing the impact it has made on one’s life.

This, however, wasn’t the case for Zach Meadows, a first-year criminal justice major at Ohio University Chillicothe and manager at the Wendy’s in Circleville, Ohio. Meadows aspires to become a probation officer so that he can work one-on-one with people in hopes of changing lives.

On the evening of March 23, 2020, Meadows was going about his usual managerial end-of-shift duties when one of his crew members approached him about a man at the drive-thru window asking for food. Instead of having the man leave, she told him to wait a minute and went to speak with Meadows.

Due to the Coronavirus outbreak, stores and restaurants throughout the state are closing early, making it very difficult for truck drivers and traveling employees to get food and other necessities.

“We had actually been closed for about 5-10 minutes,” remarked Meadows. “When I approached the window and began talking to the man, I found out that he was a truck driver. He asked if it was a problem because he hadn’t really eaten all day. I told him to give me a second and asked if he wanted something to drink.”

Meadows threw together a meal consisting of chicken tenders, fries, and a drink.

“He told me he wanted a small root beer, but I have him a large since he’s on the road 8 to 9 hours a day,” stated Meadows. “I just wanted to do what I could to help. He tried to pay me, but I refused. I told him, “It’s free for us, so it should be free to you.”

In turn, Martin gave Meadows $5 in Canadian money for his generosity.

As Meadows went about his business that evening, he soon realized that the truck driver was, in turn, very grateful for his actions.

A fellow co-worker contacted Meadows informing him that he needed to look at the Wendy’s of Circleville Facebook page. Upon looking at the page, he noticed that the truck driver, Justin Martin, had filmed himself prior to eating his meal in his truck so that he could share his story and express sincere gratitude toward Meadows. Within a matter of hours, Martin’s Facebook video (opens in a new window) went viral.

Martin is a truck driver from Ontario, Canada, who currently works for International Truckload Services (ITS). Lately, Martin has been transporting essential goods throughout his normal routes, which include Ohio, Iowa, and North Carolina.

“These are the little things that go a long way,” remarked Martin. “You usually never really have an idea how much they mean or who the person is that you’re doing that little thing for. In this case with Zach, he ended up being recognized with the video being viewed over 250,000 times in a week and a half. All over the state people are bragging on him like he’s their own child.”

Martin shared that he views Meadows as All-American.

“To me, Zach is the perfect example of an Ohioan – the bread and butter, blue collar people, who love their state and have a lot of pride in who they are when they represent their state. Once this video got out, Ohioans were really proud of Zach. They were so proud that a truck driver got treated that way by one of their own and that’s exactly what Zach is – he is an Ohioan.”

When speaking of his video, Martin said that he really just did it so that Zach could get the recognition for his kindness. “It’s all about Zach and his staff that night. The girl working the window went to get Zach ever after she told me that she was sorry because they had already thrown out all the extra food. I was ready to walk away, but she told me to hold on a minute.”

He continued, “Even the other kid working the drink dispenser was adamant that I was going to have a soda, and I don’t even really drink soda,” he chuckled. “It was just the fact that they wouldn’t let me go without one.”

Martin explained that he wanted to make the video to say thank you to Meadows as well as give him the spotlight.

“The reason I made the video was to bring attention to him, not me, so that he could get thanked by everyone and be admired by who he is. I’ve come across all sorts of people and I notice how people treat each other so when things like this happen, it inspires me and gives me hope that there are some very aware, young people who are attuned to the world. He was just a great kid. It says so much about him that you know he’s going to be successful.”

He continued, “It’s funny that a video like this over a small act of kindness and awareness has gone viral and gotten over 250,000 views. To me, it’s not a big deal because I’ve had videos go viral, but to have Zach receive it is one thing.”

When Meadows first saw the video, it had about 200 views, which he thought was pretty cool, but soon realized that it was much more. “When I woke up the next morning, I had all these text messages; people trying to call me, including the Vice President of Wendy’s; all my fellow managers congratulating me. It was humbling for sure. At noon the next day the video had about 75,000 views.”

He continued, “Truck drivers are working their tails off right now with the situation we’re dealing with. It was just a little token of appreciation that went a long way, something I could do to make sure he was fed that night. I don’t want to turn anyone away from not eating - no matter who they are or what they do – it’s something I would’ve done regardless of our situation.”

Martin shared during his interview that he’s usually in the area at least twice, if not, three or four times a month, and he hopes to return to the Circleville Wendy’s soon so that he can catch up with Zach and make sure he’s getting the recognition he deserves.

“Everything that I seem to be receiving from this, I hope Zach is getting it two-fold,” shared Martin. “People keep thanking me for what I do and I’m just doing the same job I’ve been doing for 16 years.”