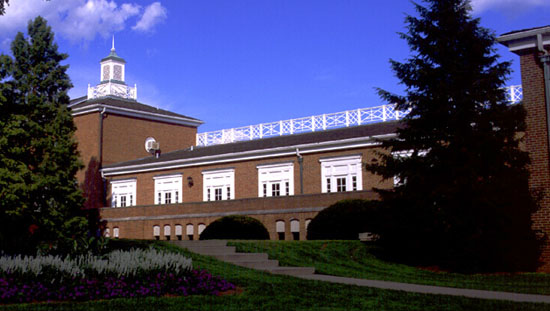 Nelson Commons is located in the South Green, coordinates J-6 on the campus map. It is marked as #75 on the map.

Nelson Commons, located on the South Green, is a dining hall that serves between 1800 and 1900 meals for dinner each day. There is also a snack bar in the building that is open evenings.

Built in 1967, the georgian design Nelson Commons building opened in May 1968. The dining hall originally seated 500 persons at a time.

Nelson Commons was named in honor of Daniel Nelson, born in Shrewsbury, MA. in 1775. His forbearers came to America in 1638 from Rowley, England. He purchased land from the Ohio Company in 1814, settling in what is now known as Nelsonville, OH., being named after him. He donated the public square, land for schools, and a cemetery. He opened the first post office in Nelsonville, and built the first bridge over the Hocking River. He was a leader in early development of clay and coal industries in this region.