Through the Survivors' Lens, a survivor-centered art exhibit, opens Aug. 26 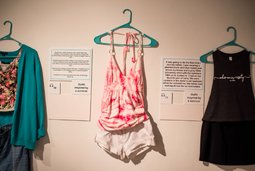 Ohio University is continuously working to improve support of survivors. We are proud of Ohio University students, faculty and staff who are standing up against sexual assault year-round on campus and in our community.

One shining example of these efforts is the partnership between the University community each fall for the past several years to develop an arts-based, survivor-centered program, such as the “What Were You Wearing?” exhibit in 2018 and the Monument Quilt in 2017.

This year is no different, as OHIO prepares for the opening of the “Through the Survivors’ Lens” art gallery. The exhibit is open from Aug. 26 through Sept. 14 in Trisolini Gallery in Baker University Center 405, with a reception from 6 to 8 p.m. Thursday, Aug. 29.

Events such as "Through the Survivors' Lens" highlight the importance of listening to survivor voices as we strive to make culture change, not just at Ohio University but nationwide.

“As a student survivor it means so much to me that my university makes a real effort to hear our voices,” said Katie Johnson, a junior studying communication studies. “’Through the Survivors’ Lens’’ gives us a chance to share our stories and show that we are not alone.”

“Through the Survivors’ Lens” features 52 photographs documenting survivors’ responses to prompts such as: What does survivorhood look like to you? What did the experience of trauma look like to you? How does your assault or trauma still affect you?

“Those who visit the gallery will see photos that represent the span of a lifetime,” said Director of OHIO’s Women’s Center Dr. M. Geneva Murray. “Some photographs reflect childhood trauma, sexual violence in college and domestic violence in long-term marital relationships. Everyone can experience the exhibit in different ways. Braille is provided, as is audio recordings, with item descriptions of the photographs.”

Over the years, OHIO has witnessed the power of arts-based approaches in educating people on sexual assault, domestic violence, dating violence and stalking, Dr. Murray explained.

“We are so appreciative to all the survivors who contributed to this exhibit,” said Kim Castor, director of OHIO’s Survivor Advocacy Program. “By sharing their perspective, they are helping to create a culture in which others better understand the diversity of the survivor experience and learn ways in which they can be more supportive of survivors.”

According to Dr. Murray, those reflecting on past survivor-centered programming indicate that this approach helps build empathy and assists viewers who have not stood vocally against interpersonal violence by interrupting rape culture to feel more empowered in doing so.

“Some viewers who have also experienced interpersonal violence have described the importance of seeing other survivors' voices uplifted in this way, feeling less alone, and considering sharing their experiences with others,” she added. “Whatever experiences one may bring with them to this exhibit, we hope that it empowers them, either as a survivor or as an ally who can contribute to building a culture of support, rather than a culture of shame.”

Dr. Murray noted that the exhibit provides participating survivors with an opportunity for expression that doesn’t rely on spoken word, but instead, photovoice, a methodology anchored in participatory action research, to support survivors so they could take photographs that represent what they would like to communicate.

She explained that scholars have noted the use of photographs as empowering survivors, and by using photography and captions, participants are able to communicate in multi-modal ways.

“Sometimes words are not enough to communicate one's experience,” Dr. Murray noted. “The captions provided in the exhibit, however, help the viewer understand how they should be looking at the photograph, and provides context to their understanding. For survivors that view the exhibit, knowing that you are not alone, as a survivor, can be an incredibly powerful, yet sad, experience.

“There is no relishing in that others have had traumatic experiences,” she continued. “However, to name one's experience, and to know that there are other survivors that are equally not at fault, can help lessen self-blame, the concern that others won't believe you, and provide you with a supportive network - even if they are anonymous.”

Dr. Sharon Casapulla, director, education and research for OHIO’s Heritage College of Osteopathic Medicine’s Office of Rural and Underserved Programs, said people connect to each other through stories.

“Photography is a powerful tool for self-expression and storytelling, and the process that has gone into creating this exhibit is evidence of that,” Dr. Casapulla noted. “In addition to being a tool for self-expression, the photovoice process enables outsiders to bear witness to the experience of others, and through witnessing, build empathy and a stronger sense of community and ally-ship.”

“Through the Survivors’ Lens” demonstrates how OHIO works on sexual violence prevention across the institution, and promoting accessibility of the programming. The exhibits would not be possible without the support of OHIO’s Women's Center, Survivor Advocacy Program, Health Promotion, Counseling and Psychological Services, the College of Fine Arts and University Galleries, Office of Instructional Innovation, Ohio University Libraries, Better Bystanders, Ambassadors to the Survivor Advocacy Program, and the Student National Medical Association.

Dr. Murray said everyone has a role in supporting survivors and challenging the very structures and systems that allow for sexual violence, dating violence, domestic violence and stalking to occur.

“The exhibit is one mechanism that we utilize, among many, to foster discussion and reflection as to what change should look like, and what steps we should be taking to commit to that change,” Dr. Murray added. 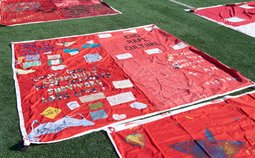 A section of the Monument Quilt in 2017.

Tags:
what were you wearing
art
survivors
lens