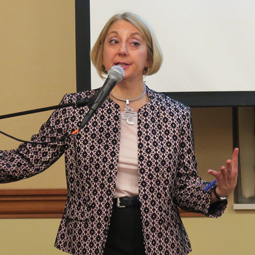 Dr. Martha J. Cutter, professor of English and Africana Studies at the University of Connecticut, came to Ohio University’s Baker University Center Multicultural Center on Nov. 27, to share the amazing story of Henry Box Brown, who in March 1849 escaped slavery by being mailed in a wooden postal crate from Richmond, Virginia, to Philadelphia.

A former Kent State University professor and longtime friend of Dr. Singh, Dr. Cutter is the author of three books, including her latest one titled, “Passing: The Strange Cultural and Historical Meaning of a Word.” It traces the origins of racial passing and provides a cultural history of its changing significance in U.S. society from the 18th to 21st century.

Dr. Rice started the event by thanking the sponsors and reading Dr. Singh’s impressive credentials, including serving as past president of three professional organizations, recipient of a lifetime achievement award and several academic fellowships.

Dr. Shields told the crowd that teaching about diversity is important because, as a University, we must prepare students to function along with people from diverse, multicultural backgrounds. He added that the new lecture series aligns with President Nellis' Strategic Pathways for the University.

President Nellis stated that the University holds diversity and inclusion at the highest level.

"This was a very exciting event not only for the college, but for our University," President Nellis said. "Lectures like this are very important to our faculty and students as well as community members. This is truly a part of transformation learning, an experience that Ohio University champions."

Dr. Singh told the audience during his introduction of Dr. Cutter that he appreciated the fact that she teaches in both African- and Asian-American Studies and that the spirit of Langston Hughes is open borders – to be able to reach across races, ethnicities, nations and boundaries because there is so much that we share across them.

During her talk, Dr. Cutter called Brown’s box to freedom “one of the most spectacular escapes from the antebellum period.”

As a free man, Brown performed in the U.S., Canada and Europe as a singer, actor, magician, mesmerist and electro biologist. Dr. Cutter said she believes that he did all of these things to escape the way that people wanted to box him into this one image of himself.

“He becomes a master of multimedia, he has a lot going on and his panoramas were fascinating,” Dr. Cutter said. “He would also dress as an African prince and hypnotize people during his shows.”

According to newspaper reports, Brown would sometimes make his hypnotized, primarily white, audiences fall asleep, awaken, jump, dance, ring imaginary bells, hold one leg in the air and fall back to sleep again.

“It’s kind of fascinating that a man who was once a slave now has a white audience under his control and kind of forcing them to be his slave for some length of time,” Dr. Cutter said.

Brown also performed magic tricks and often played with symbols of his own enslavement, like a wooden box and shackles. Dr. Cutter said Brown would escape from the box and the shackles, which was a way he could make his audience see themselves in confinement.

“By turning slavery into a toy, prop or spectacle, Brown embraces objectification and finds a mode of subjectivity of human identity,” Dr. Cutter said. “He impersonates himself in order to re-embody and re-enact his human identity.”

Dr. Cutter said the Henry Box Brown story is about both a man in a box and a man who is constantly escaping from his box.

“He’s constantly getting out of his box and dismantling the many boxes into which he is placed in a trickster-like fashion. This reminds me a lot of Langston Hughes,” she said.

Dr. Cutter said it was appropriate that her talk is the inaugural Langston Hughes Lecture because she sees really clear connections between Brown and Hughes.

“We know that Langston published sketches with his character Jesse B. Semple, aka Simple. He reached many people through this fictional character who was a poor man who lives in Harlem and is a comic no-good. Simple tells his adventures to Boyd, who is a writer much like Hughes. ... There is some real slippage between the autobiographical person, the real person and the persona that he creates, and the character of Simple.”

She said the Simple stories tie into Brown because Hughes used alter egos to conflate and confound boundaries between the real self and the artistic persona he created in his writings and performance work.

"It was great! I'm interested in ethnic literature and her areas of study are close to mine," Babcock said. "She studies how identities constructed can be played with in narrative and literary forms. How you can reinvent or transform yourself in ways that are subversive and challenging to roles that the dominant culture try to cast you in."

After Dr. Cutter’s talk, Dr. Singh said he was amazed and touched by the response to the lecture and added that the turnout was larger than he anticipated.

"We are off to a good start to a lecture that will be held every other year on a variety of topics," Dr. Singh said. "It's important to continue to address issues of race, class and differences in the spirit of Langston Hughes, who was a very global and transnational figure." 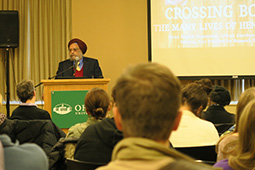 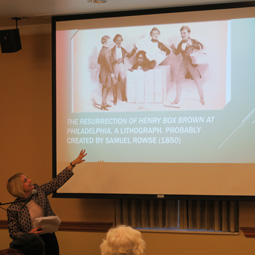