Both Blazier and Rinaldi-Eichenberg work with online degree completion students and print-based students, such as those participating in the Ohio University Correctional Education program.

Blazier joined eCampus in 2012. She previously was an admissions counselor for eCampus.

“Transitioning to being an academic advisor was a wonderful opportunity to continue along the path with the same population of students, working with them on their journey toward graduation,” said Blazier. “My favorite part of the job is that I get to work with really great people. This includes my eCampus advisees who are constantly inspiring me, and the amazing team and network of people I work with at the University.”

Julie Cohara, the director of degree programs in University College, nominated Blazier for the award because of her graceful advocacy for students. “Sarah’s advising is so positive and student-centered,” said Cohara. “What further distinguishes her excellence is that she’s extremely skilled with Appreciative Advising. Her warmth and empathy are particularly and admirably disarming for students.”

Before coming to Ohio University in 2015, Rinaldi-Eichenberg was an instructor of English at Hocking College.

“Working with online and incarcerated students is obviously much different than working with students face-to-face,” said Rinaldi-Eichenberg. “It has forced me to give more thought to the nuances of written communication and how to develop dynamic relationships with individuals that I may never get to meet in person.”

Ginny Cottrill, the eCampus Success Coach who nominated Rinaldi-Eichenberg for the award, said, “Michael is passionate about academic advising, and it shows in his work. His attention toward his advisees is prompt and thorough, which is much appreciated by them.”

“I’m proud to see our professional organization acknowledge something that I get to witness every day through student feedback,” said Joe Carver, director of student and academic services in the Office of Instructional Innovation. “I think both Michael and Sarah would be the first to say that this honor is in large part due to the strong support across our office.”

OHAAA selected Ohio University as the site of their 2018 conference. Carver noted that Cottrill was instrumental in this year’s event as she served as the OHIO point of contact for helping organize the event at Baker University Center.

The Advising Excellence Award was established by the OHAAA Executive Committee in 2006, and the Outstanding New Advisor Award was established in 2017. Those who have received the awards demonstrate service and commitment to students and to the college, represent the college well, and are innovative in providing advising services. OHAAA is an allied member of the National Academic Advising Association and is dedicated to meeting the needs of academic advisors throughout the state of Ohio. 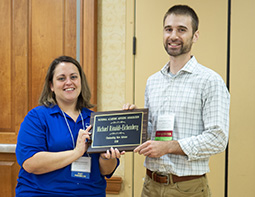 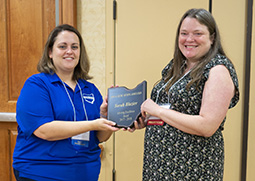