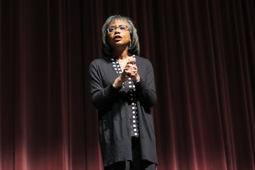 A near capacity crowd filled Ohio University’s Templeton-Blackburn Alumni Memorial Auditorium on April 1 to hear women’s rights icon Anita Hill share her ideas on how we can all help end sexual harassment in America.

Hill's visit was part of the University's Kennedy Lecture Series, which annually brings voices to campus to discuss a wide range of important issues. The speaker series began in 1962 thanks to a generous donation from OHIO alumni Edwin L. and Ruth Kennedy.

A professor of social policy, law and women's, gender and sexuality studies at Brandeis University, Hill became famous during the 1991 confirmation hearing of United States Supreme Court Justice Clarence Thomas, where she testified that he had sexually harassed her in the workplace.

During her lecture titled, "From Social Movement to Social Impact: Putting an End to Sexual Harassment in the Workplace," Hill shared many stories, facts and ideas on how we as a society can combat sexual assault.

She started her talk by saying, “We can and must end sexual violence. It is imperative for our physical and emotional wellbeing – it’s a key step toward gender equality.”

Hill said that in the face of compelling evidence, sexual violence should never ever be acceptable and that no one should be minimized by the concern for the careers of powerful men.

“To make sure that this doesn’t happen, our public and private institutions have to step up,” she said. “We have to provide the processes and policies needed to address domestic violence. It has to be considered a public concern, not just a private concern.”

Hill said the popularity of the #MeToo movement as well as the recent Brett Kavanaugh Supreme Court confirmation hearings has created a historic moment for women’s rights.

“We now have a moment which is unprecedented,” Hill said. “We have the chance to respond to sexual harassment and assault and we have the chance to answer the call and cries of the individuals involved in the ‘Me Too Movement.’ We must not only change hearts and minds, but also policies and procedures and invest in the resources needed to put an end to these behaviors.”

Hill said her 1991 testimony before the U.S. Senate Judiciary Committee was life changing.

“I worked with him (Clarence Thomas) when I was 25 years old and I’m much more seasoned now,” she quipped. “At that time I felt vulnerable and disvalued by the harassment itself and the experience of reliving it in such a public forum. When I testified, most people failed to see any connection between the behavior I’d experienced and my ability to be treated as an equal without bias based on my gender.”

She said too many people saw what she had experienced as a private personal matter not worthy of public attention.

“They didn’t even think it was worthy of having a hearing,” Hill added. “They saw it all too often as something women would have to endure and have always endured. They certainly saw it as something that shouldn’t threaten the career of a powerfully connected man who was in a position to lead this country on its highest court.”

Hill said our nation has moved on from 1991 and she believes we are in a new day in the history of sexual violence with harassment being just one element of that.

“I think it’s a day of great possibility for gender equity,” she said. “I think we are on the verge of monumental change and we can’t let this moment pass without doing everything we can to make that change real.”

Hill said our nation also needs to get beyond its racial history so that we can all come together and make progress from our gender history.

She said sexual abuse deniers always try to have you believe that sexual harassment is an invention of modern feminism and they claim that it was invented so that people can claim victimhood.

“That present day reaction to a historic problem is a divisive tool that has hampered our progress and threatened the security of countless women in schools and the workplace,” Hill said. “It’s just a tool to divide us against our own interests. This is not a political issue. It is an issue of public concern and given the numbers that we know, I would declare that it is an issue of public crisis.”

Hill said that the progress has not been good enough. She shared some of the policies and procedures that we need to end sexual harassment:

“Everyone has a role. We must foster cultures of intolerance for abuse and support for survivors,” Hill said. “With sexual misconduct, there can’t be bystanders anymore. We can all be leaders in our workplace and our employers must give us the training and tools for us to be part of the cure.”

She closed her lecture by saying that we need to work together as a community and believe that we are tied together in an inescapable network of mutuality.

“We must believe that we can achieve the goal of change that will make the world a safer and better place,” she said. “I know that you are ready to join me in this struggle.”

“I liked when she said sexual assault is not a private problem, it’s a public problem, and it’s our problem,” Armstrong said. “I also liked when she said the integrity of the Supreme Court is tied to the people who occupy it. It made me think about the recent Brett Kavanaugh hearing and how it was a repetition of history. I agree with her that since 1991 a lot has changed, but there is also a lot more to be done.”

Graduate student Doreen Siilo said Hill’s talk was educational because she talked about how people are being sexually abused every day.

“Sexual assault should be an issue for everybody,” Siilo said. “She talked about policy and what college campuses are doing. I agree with her that too many people in sexual assault cases are getting stuck in the processes. So I ask, what are we doing as a people to help deal with such issues of sexual violence?”