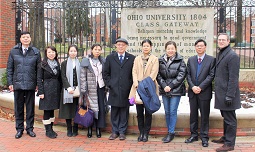 The meetings on the Athens campus were part of the delegation’s trip to the state of Ohio, which has had a sister state/province relationship with Hubei since 1979. The Hubei Province has more than 120 higher learning institutions, including two of the Top Ten Universities in China.

“This visit proved to be a wonderful opportunity to discuss how Ohio University may be able to work together with the Hubei Province on several initiatives,” Vice Provost for Global Affairs and International Studies Lorna Jean Edmonds explained. “Our meetings were productive and we are now continuing the conversations.”

They were accompanied by

The Office of Global Affairs coordinated the visit and set up several events so that faculty and staff with an interest in collaborating with educational institutions in China could meet with the delegation members. College of Business Professor Hao Lou, who was one of Deputy Director-General Li’s professors when she was a student at Ohio University, assisted in coordinating the events during the day.

Ohio University has worked with educational institutions in the Hubei Province several times in recent years, including the College of Business programs in the early 2000s that Deputy Director-General Li was a part of.

The College of Business graduated 128 Hubei Province government officials and engineers from the Wuhan Steel and Iron Corporation from 2001-2005. Those graduates included three MBA classes and two executive training classes, and there is now an active Ohio University alumni organization located in Wuhan, China. Professor Lou served as the coordinator of the OHIO-Hubei MBA program.

In addition, an Ohio University delegation led by then-President Robert Glidden visited the province in 2002.

One main event of the January visit was a welcome reception/open forum that gave each of the delegation members an opportunity to discuss the work they are doing and their interests in potential collaborative programs with Ohio University. The representatives also expressed how pleased they were with the welcome they received on campus and how impressed they were with the university facilities.

Ohio University faculty and staff who attended the forum were able to discuss the work they are currently doing in China as well as their interests in collaborative programs with institutions in the Hubei Province.

Additional events during the visit included a campus tour, a luncheon with several deans, and a meeting with Edmonds to learn more about Ohio University’s academic programs and to further discuss potential areas of partnership. Additional photos from the visit can be seen here.

For additional information on the visit from the Hubei Province representatives, please contact the Office of Global Affairs at 740-593-1840 or globalaffairs@ohio.edu.