‘A Mile Together’ creates awareness, educates on power-based personal violence 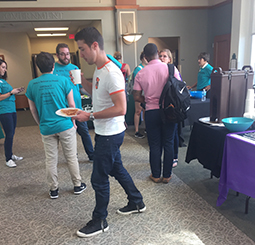 Photographer: Erin FranczakMembers of Better Bystanders work with staff from the Office of Equity and Civil Rights Compliance, the Survivor Advocacy Program and the Campus Involvement Center during the kickoff for “A Mile Together.”

A student organization, Better Bystanders was formed with a goal of providing innovative and engaging power-based personal violence prevention, bystander intervention and consent education to the OHIO community.

The group kicked off its annual “A Mile Together” on Sept. 26 by offering members of the OHIO community free T-shirts and pizza in exchange for them participating in a brief educational session on bystander intervention. Participants were then encouraged to don their free T-shirts, which were teal – the color of sexual assault awareness, and spend some time on the Baker University Center escalators, drawing awareness to the event’s purpose and inspiring discussion on eliminating power-based personal violence through bystander intervention.

While the main goal of these events is to bring awareness to the issues of violence, Matt Hall, assistant director of health promotion and advisor of Better Bystanders, said they also want to give students and other supporters the ability to identify what violence looks like and the tools to be a “better bystander” to combat the problem.

Hoge discussed the three techniques – also known as the three D’s – Better Bystanders teaches to safely intervene in situations involving power-based personal violence. The direct approach would involve directly speaking to the perpetrator about the problem. Hoge said with the delegating technique someone would seek help from a person with more authority such as an older friend, resident assistant or police officer. The last approach is to distract the perpetrator by, for example, spilling water or asking a friend to go to the bathroom.

The “A Mile Together” event has been going on for many years, but the name was changed from “Walk a Mile in Her Shoes” three years ago to be more inclusive to all groups on campus. The “Walk a Mile in Her Shoes” event originally began with men wearing and walking in women’s shoes to show their support for women and to facilitate dialogues on rape, gender violence and sexual assault.

“I have many folks in my life who have been impacted by sexual violence, and it changes someone’s life in a multitude of different way, and to do this work in their honor is very powerful for me,” said Hall. 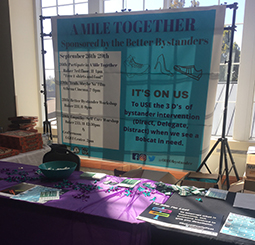 Photographer: Erin FranczakA banner at the kickoff for “A Mile Together” highlights the week’s events as well as tips for being a better bystander.