Take Back the Night speaker encourages everyone to be a better bystander
Published: April 11, 2018 Author: George E. Mauzy Jr. 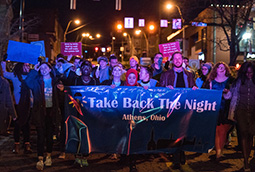 As part of Ohio University’s 2018 Take Back the Night programming, keynote speaker Tim Mousseau delivered his talk, “Retaking Our Story: Reframing the Sexual Assault Conversation,” on April 4, in the Walter Hall Rotunda.

The annual Take Back the Night events seek to reclaim the night against sexual and domestic violence. In addition to Mousseau’s keynote talk, the two-day event included: Educational workshops, a name burning ceremony and a Take Back the Night rally and march.

During his talk, Mousseau shared how being a survivor of sexual assault has changed his life and he encouraged his audience to find ways to prevent sexual violence incidents around them.

Mousseau said he became a survivor of sexual assault when he was around 21 years old and in college. He said he was drugged and had no recollection that he was sexually assaulted until he was sent pictures of the assault in the mail by his anonymous male assailant.

“These photos of me changed my life,” he said.

After being psychologically and emotionally tormented by his assailant for about two years, Mousseau said he bought a gun and started drinking heavily as a coping mechanism. One day he said he told his mother that he wanted him (assailant) to come after him so that he could kill him.

He said after contemplating suicide and realizing things needed to change immediately if he was going to live a productive life, he sought out professional help and joined several support groups for sexual assault survivors. He said those actions started his healing process.

“I finally said I’m done and I won’t worry about it,” he said.

Now Mousseau travels the country to encourage sexual violence survivors to share their stories because he believes that it is our stories that connect us as people.

“We use our personal stories to drive society and provoke change,” he said. “They make us who we are. Every one of us has one.”

Mousseau said we need to change the way we talk about sexual assault.

Mousseau provided the audience with some alarming statistics. He said 6 percent of men and about one in five women experience some form of sexual assault while in college.

He asked the audience to consider what more they could be doing to prevent sexual violence.

“Me sharing my story with you is not likely to make you do anything about preventing sexual violence,” Mousseau said. “We see the world through our own story. We believe it’s not happening to people we know.”

"We need to have better conversations about sex. We do a terrible job of talking about sex. We teach people how to have safe sex, but not consensual, healthy, enjoyable sex. We haven’t been taught what that means.”

He said the popular anti-rape slogan, “No means no,” is not deep enough to teach people about consent and about 40 percent of incoming college students don’t understand what “consent” really means.

Mousseau said it’s about talking with your partner about sex before it happens because consent is different for each of us.

As for supporting survivors, Mousseau said we all need to be ready because eventually someone we know will tell us about a sexual assault they have encountered. He shared these tips.

Katrina Kopronica, a sophomore journalism, news and information major, said it was really important to her to hear a male talk about sexual violence because it’s usually women who talk about being survivors.

“It was nice to hear from his point of view, because it gives me a new perspective,” she said. “He said we need to teach people more about how to obtain consent in different ways. I also liked how he talked about discussing our sexual values with our friends. That way if I see them in a certain situation, I’ll know what to do. I’m definitely leaving here with a new outlook on things and that’s powerful.”

Meghan Rowe, a freshman journalism, news and information major, said she liked how Mousseau’s talk was all encompassing.

“I liked his story because it was from the male perspective,” she said. “His story and talk was multifaceted and comprehensive. He said we can be better bystanders by being proactive and that’s what I plan to be from now on.”

Mousseau said if you think about it, sexual violence is very preventable.

“Someone could have stopped him (his assailant),” he said. “If you are a survivor, I want you to know that you are not alone. I will always be a survivor. What is your story going to be?” 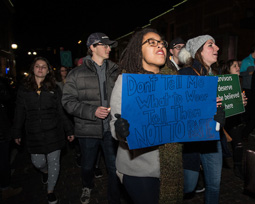 Photographer: Meagan HallMany OHIO students walked with signs during the Take Back the Night march on April 5 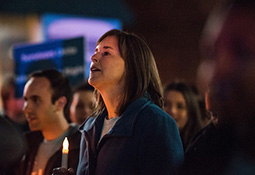