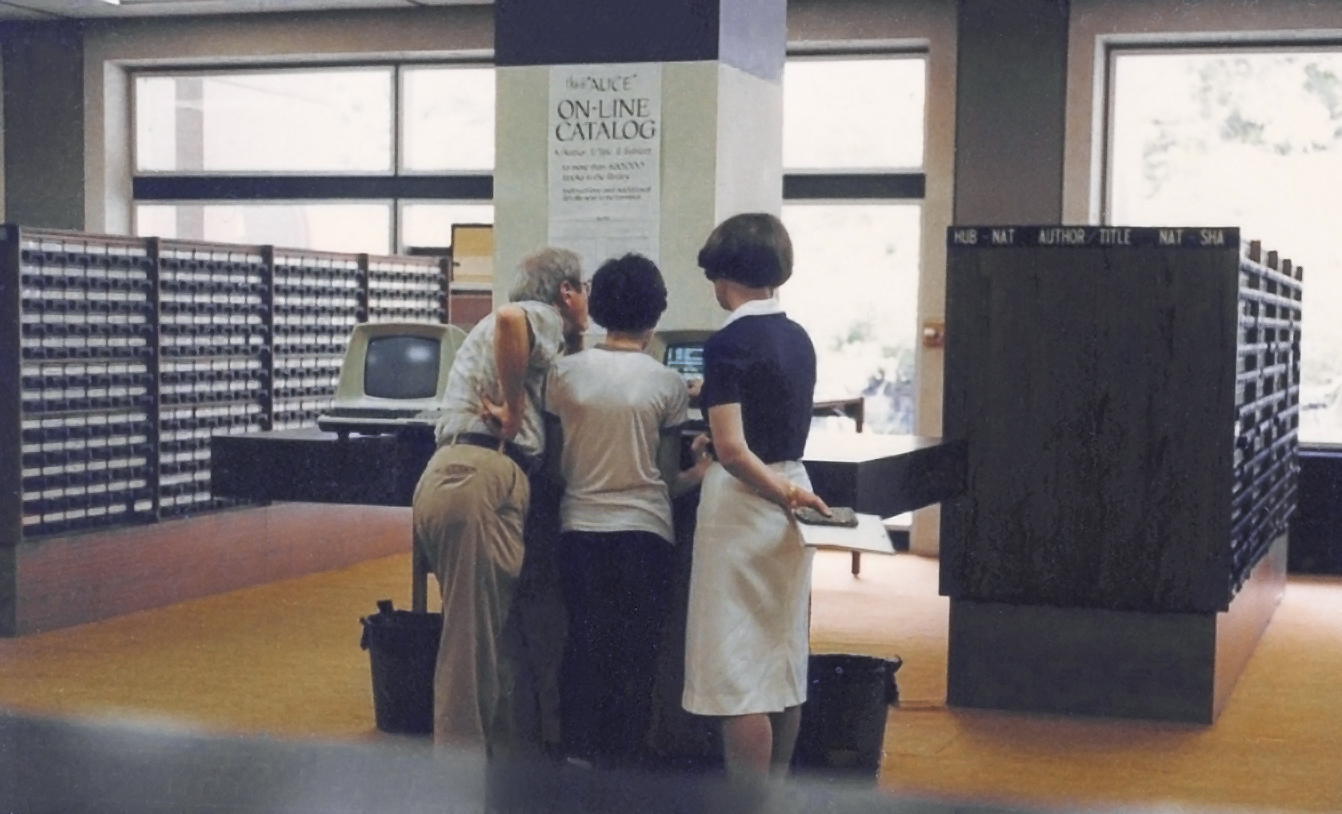 Courtesy of University Archives/Ohio University Libraries For a short time, a dual system of searching materials was in place before the card catalog was completely removed. Pictured is a librarian assisting the OHIO community in searching the “On-Line Catalog” inside Alden Library, ca. 1980s.

It can be said that online cataloging as it is today began on Aug. 26, 1971, when Ohio University’s Vernon R. Alden Library, using a dedicated phone line, was the first in the world to generate an electronic library record. That online cataloging system, created by the Online Computer Library Center (OCLC), became a pioneer in networking library materials.

Fifty years later, the world and OHIO still celebrate the anniversary of this historic moment.

“The creation of that first electronic catalog record by the OHIO Libraries was a transformative moment not only for libraries, but for the ways in which people think about, share and access information to this day,” said Neil Romanosky, dean of University Libraries. “The importance of the occasion — and the University and the Libraries’ role in it — cannot be overstated.”

The unique history of OHIO Libraries includes many innovative firsts, such as being the first academic library (1814) and having the first professional librarian in the Old Northwest Territory. OHIO was also the first library in the world to catalog online, as well as many other landmark accomplishments.

This revolutionary adaptation of digital technology changed the way libraries around the world catalog their materials and was the predecessor to OCLC’s WorldCat, an international, searchable network of library collections and services.

According to their website, WorldCat is “the world’s largest and most comprehensive catalog of library resources from around the world.”

In the article, “WorldCat Turns 40,” Bob Murphy, manager of media relations for OCLC, talked about the evolution of technology during an interview for the 45th anniversary with Lynne Lysiak, an Ohio University librarian who was present just as the online cataloging system was being launched.

“In retrospect, I have to say that in those early days, I don’t think we really understood the enormity of the system that we were embarking upon, much less did we consider what the future possibilities might be,” Lysiak said.

The entry of the world’s first online record was preceded by nearly five years of planning for the formation of OCLC, which the Ohio College Association approved in 1966. Their primary goal was to create a shared online library catalog containing all of the collections held by participating libraries.

A brochure from those early years read: “Member libraries would catalog their holdings in this central database, instead of individually,” which meant bibliographic data for a single book was created only once, instead of over and over by individuals all over the country. OCLC would “then print these records on catalog cards and ship them to the member libraries, thus reducing each library’s cost.”

In addition to the financial savings, one of the principal benefits of adopting the online cataloging system was the intellectual staff time that would be saved. It was anticipated that as the computerized system continued to evolve, it would completely replace the traditional card cataloging system.

From Card Catalogs to Digital Technology

At the time of its introduction, OCLC’s online cataloging process was virtually unheard of amongst libraries. Prior to the system’s debut, the most common method for tracking library materials was the card catalog, which consisted of stacked drawers holding hundreds of 3-by-5 cards — each listing information about an item such as its title, author, publisher, subject and call number.

Today, many people may view the card catalog system as an outdated method for locating materials, however, prior to its use, libraries used more casual, and even less efficient forms of organizing information.

In the earliest years, libraries depended upon a librarian’s memory to locate materials. It was not until after the printing press was invented that more controlled cataloging of collections came into practice. During those years, printed catalogs became the most common method of organizing library materials.

The benefits were that they could be mass-produced and were easy to transport. On the other side of the coin, library acquisitions grew more rapidly than the publication rate of printed catalogs, so by the time the catalogs were printed, they were outdated.

According to the article, “The Evolving Catalog: Cataloging Tech from Scrolls to Computers,” written by librarian and consultant Karen Coyle, “Not only were more copies of books produced than ever before, but the numbers of new writings and new editions also grew.”

Coyle continues, “Although neither the [printed] book catalog nor the [card] catalog meets all needs as efficiently as one would desire, the card catalog had already proven itself as an up-to-date instrument for library users and librarians alike.”

Michel Perdreau, a graduate student employee in OHIO’s cataloging department in 1971, recalls how the Libraries’ staff was responsible for typing and organizing the cards before they could be filed in the card catalog.

“There was a whole pool of people who were typing cards, and we were spending hours in front of the card catalog, putting those things in order and filing them,” Perdreau said. “We spent hours doing that.”

As the OHIO staff prepared to launch the online system, there was an air of excitement and anticipation among the team who met weekly to study codes.

“The people who worked on this were not only excited, but they were also extremely capable, and there was a real camaraderie,” said Betty Hoffman-Pinther, who served as the operations supervisor of the cataloging department at the time.

On the second day of operation, however, OHIO’s scheduled tasks didn’t go as smoothly as they had on the previous day; smoke began to cascade from one of the three memory-core units of the Xerox Sigma 5 in Alden Library.

The computer was taken out of operation, and technicians quickly discovered that the power pack in the core bank had failed, which, they believed, may have been the result of the severe electrical storm that took place the previous night.

By that afternoon, less than four hours after the unexpected hiccup, the system was back online.

The October 1971 edition of the OHIO Libraries’ internal newsletter announced that the first OCLC computer terminals had arrived for the processing division of Alden Library — and these two new terminals were promptly christened, “George” and “Georgette.”

The online terminal “was actually very easy to use once you learned everything…” said Gloria Devol, a cataloger in the Libraries’ cataloging department. “…We prepared ahead and [pre] coded, [on sheets of paper] all of our materials so that we could just sit at the computer and enter record after record.”

Initially, OHIO Libraries used the online system to produce the 3-by-5 cards for the card catalog that researchers used on the fourth floor of Alden Library. Later, a dual-cataloging system was used during the transition between the card catalog and the online catalog.

In 1972, Anita Adams, an undergraduate in education, began working in Alden’s periodicals as a student employee and describes the early online system as “exciting and kind of scary all at the same time.”

“There were a lot of people [who were] very frightened,” Adams said. “‘Oh, we won’t be able to find anything ever again if we don’t have catalog cards, and what if the system goes down? What if…’ You know, there were just so many ‘what ifs.’”

The Expansion of Online Resource Sharing and Research

In “Quiet Revolution Brews at Alden,” written by Nancy Rue, an OHIO reference librarian at the time, she described how the groundbreaking nature of technology had “spurred the growth of resource sharing and networks.”

Technology and computers brought in a whole new world of conducting research for scholars — who could now search multiple library collections and request delivery for their personal use.

During the early 1990s, David Ingram, chair of physics and astronomy, recalls when “online search software became available to faculty,” which allowed them to locate and then borrow materials from libraries across the state of Ohio.

“It was not quick,” said Ingram. “One needed to understand how to do a search of a database using field identifiers, and the correct spelling of any subject terms or authors’ names.”

As more and more libraries participated outside the state of Ohio, OCLC’s database grew and soon expanded internationally.

“Fred Kilgour, the founding director of OCLC, would drive two hours with visiting international guests from Columbus to Athens to show them how OHIO Libraries worked with OCLC,” Lee said.

With the expansion of online resources, everything has changed for researchers in the fast-moving world of today.

“With dynamic linking and multiple search options…you don’t have to have a pre- conceived idea of what you want to find, you can let your browsing help to define and refine your search, and indeed, to shape your very research agenda,” said Scott Carson, OHIO associate professor of philosophy.

It is hard to believe that in 1971, librarians were required to use a dedicated phone line to input the first electronic record, but today, building off that same technology, scholars can now use their mobile phones to search information from anywhere and at any time of the day.

“Working with OCLC, Ohio University Libraries was a pioneer in the formation of the world’s first and largest online library catalog,” said Romanosky. “This is an extraordinary legacy and point of pride for all of us at the Libraries and the University.”