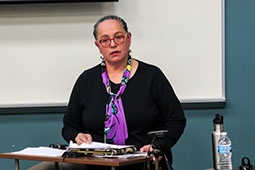 Indigenous journalist Mary Annette Pember did not want to spend her career writing about sexual assault and violence against women. She thought it would upset her and she would feel powerless. Someone insisted that she did, and Pember has now given a voice to the voiceless and discovered things about herself along the way.

Pember visited Ohio University on Nov. 14 to advise student journalists and attendees how to cover sexual assault cases and share expert thoughts on coverage of violence against women.

“I’m very happy that we have a room full of people here,” said Bob Stewart, director of the E.W. Scripps School of Journalism. “This is a topic that is very much on our minds this semester. We’re very grateful that you’re here to help us sort through some of these complex issues.”

The talk, organized by OHIO professor Dr. Victoria LaPoe, was the first national event hosted by the Native American Journalists Association, in collaboration with the E.W. Scripps School of Journalism, the Scripps College of Communication and the Institute for Applied Ethics.

An award-winning independent journalist and enrolled member of the Red Cliff Band of Wisconsin Ojibwe tribe, Pember is known for her important work documenting Native American issues. She has covered the high rates of sexual assault among Native women, sex trafficking, health, impact of historical trauma on Native communities and much more.

She is the 2018 Medill Milestone Achievement Award recipient and has won industry awards and fellowships from the International Center for Journalism, Women in Communications, The Associated Press, USC Annenberg, the Carter Center, the University of Maryland and others.

Pember shared intimate details about her life to the crowded room of people in Schoonover Center. She spoke about her struggle with alcoholism in the past and said she has been assaulted many times before.

The audience’s attention was fixed on Pember, whose quiet tone seemed to make her words even more powerful.

“In my community, sexual violence — it’s just an inescapable part of life,” she said. “It’s something I grew up with. …You’re more available somehow. … White men in particular could treat me with impunity.”

Throughout her talk, a slideshow played behind her, highlighting disturbing data sets about missing and murdered indigenous women and girls (MMIWG). The data came from a study released the same day of Pember’s talk by the Urban Indian Health Institute.

In the study, UIHI identified 506 unique cases of missing and murdered American Indian and Alaska Native women and girls across 71 selected cities — 128 were missing persons cases, 280 were murder cases and 98 had an unknown status. The median age of MMIWG was 29.

The student journalists were also given a coverage guide from the Native American Journalists Association when they arrived. It reminds them of several important reporting tactics, such as investigating, researching, possible safety risks for survivors and more.

“How news content is packaged, produced and promoted matters,” the guide states. “Headlines, video, tweets, hashtags, sources and photographs all compose the story narrative. Visual imagery and graphics should avoid reinforcing stereotypes. Reporters should select sources that represent the community they are covering.”

After Pember shared her story, a panel discussion on covering sexual violence took place. The panel included students and Dr. Patty Stokes of Women’s, Gender and Sexuality Studies, who has expertise in the prevention and aftermath of sexual assault; and WOUB Editor-In-Chief Allison Hunter.

For more information about the Native American Journalists Association, visit www.naja.com. To view the new research by the Urban Indian Health Institute, see www.uihi.org. For more about the Scripps School of Journalism, go to www.scrippsschool.org. 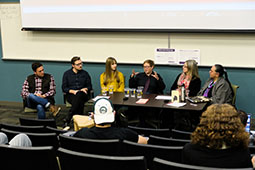